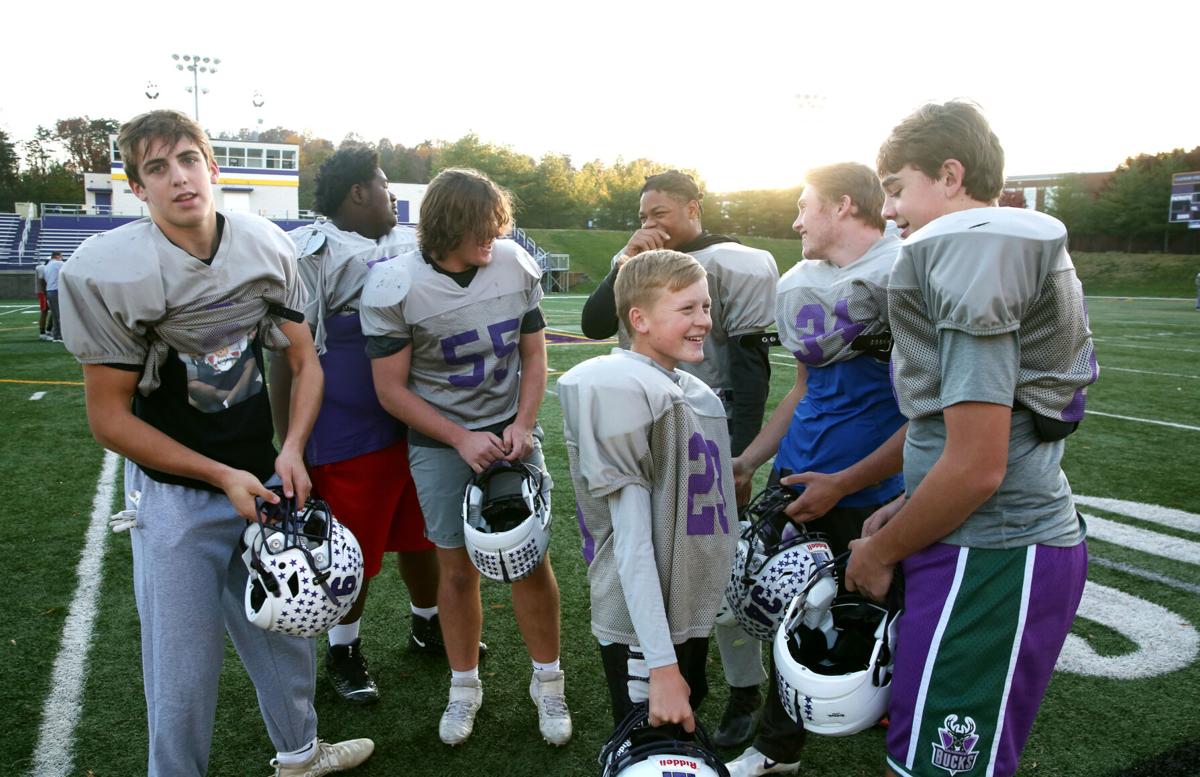 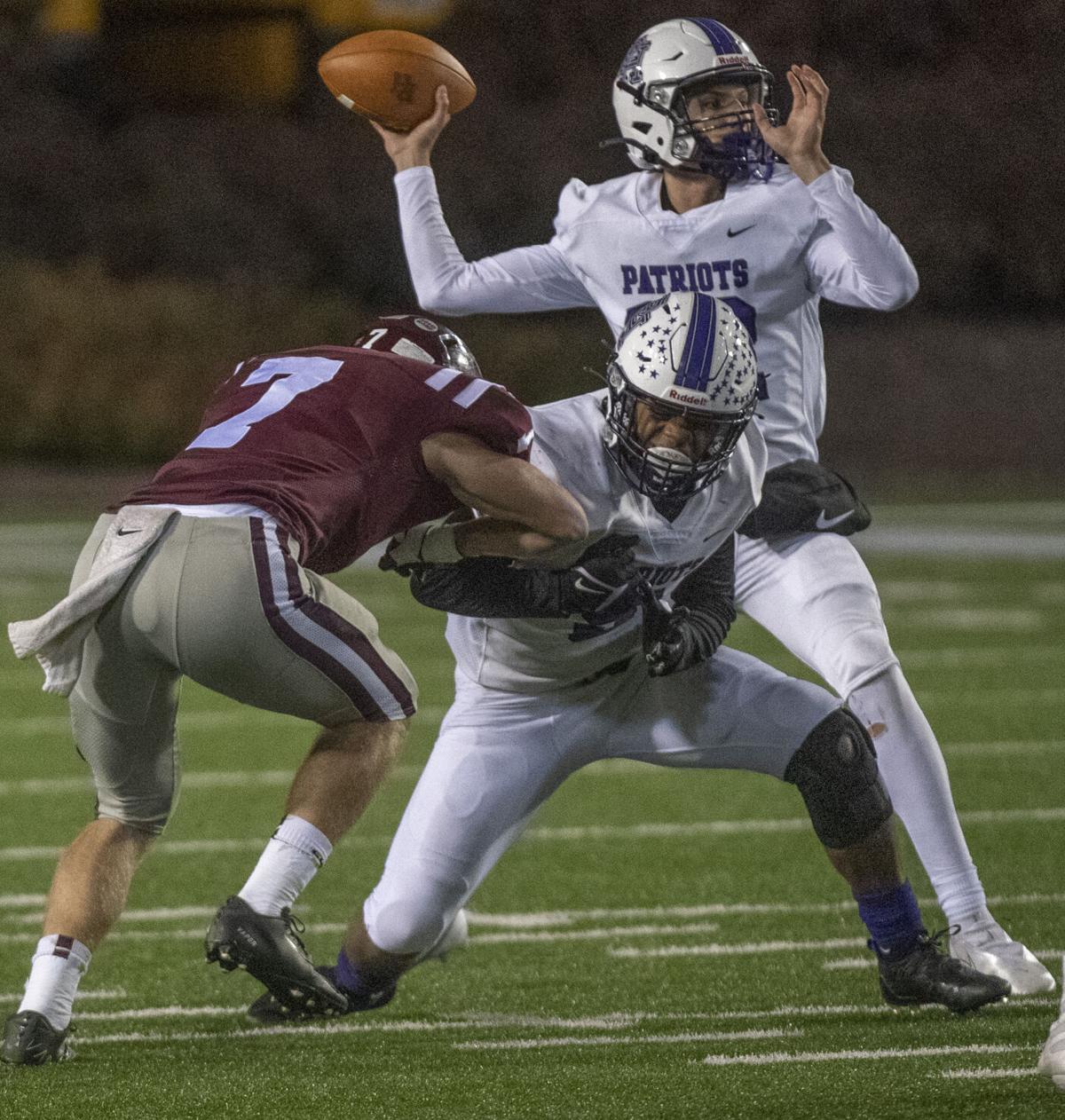 Of the nine sophomores and freshmen who have earned starting jobs for Patrick Henry High’s football team, their coach Alan Fiddler says simply there is good reason for these assignments.

It is of course helpful these young athletes play good football. There’s more to it than that, though.

As Fiddler described each of the players (including a couple of the only freshmen he’s started in 21 years of high school coaching), it is soon apparent many of the qualities he admires in them fall under the amorphous rubric “intangibles.”

There’s nothing amorphous about qualifying for a Region 5D semifinal clash at No. 3 Mountain View (10-1) on Friday as a 7-seed. The Patriots (8-3) whipped host Massaponax 42-27 last week to advance. Any way you look at it, earning that decisive a win with what most coaches would describe as a very young team is quite the accomplishment.

Fiddler’s evaluations of his younger players are revealing. Descriptions such as “understands well “ or ”gets it the first time” or “a leader” or “knows how to think” keep cropping up.

In other words, being smart always counts extra.

A winning personality never hurts either.

Two examples of the latter quality come to mind as it pertains to members of this precocious nine. One is the biggest man on the team and the other is the smallest.

Haynes, the nose guard, mans a position that demands the athlete must be essentially immovable while simultaneously operating as low to the ground as the rubber pellets anchoring the artificial playing surface.

Haynes has mastered clogging up the middle of the line of scrimmage. On the other hand, being low to the ground is not easy for one who is 6-foot-2 and weighs 355 pounds.

“Used to be 377,” he pointed out. “Growing up, I played offensive line. When you get to high school, you have to be able to play all positions. I’ve adapted to defensive line. Got to be ready to be next man up.”

That’s leadership for you.

At the other end of the size chart is freshman flyweight Dowdy, of whom the unsuspecting visitor to the Patriots’ new field house might assume is somebody’s younger brother. Not so fast there. The son of Patriots soccer coach Chris Dowdy can dribble a soccer ball with pace, handle a golf club and kick the laces off a football.

The thing is, his teammates just seem to gravitate to him. On the game-time sidelines between kicks, Dowdy always seems to be at the center of a group of animated conversationalists.

“He has an infectious personality,” Fiddler said.

Knowing his kicking skills and pedigree, there were efforts made to interest Dowdy in football before his actual arrival on varsity. At first, the kicker sounded cool to football.

“They asked me a few times to come out for football, but I was already committed to golf,” said Dowdy, who played both fall sports this season. “But I’m really glad Coach Fiddler gave me this opportunity. I obviously don’t stay at football practice the whole time — I go to golf — but I still kick a lot of balls.”

He’s 30 for 34 on extra points. When he gains more length from his kicks “he’s going to be a real weapon,” Fiddler said.

Although Fiddler and his staff anticipated they had a solid group to work with when practice started back in the summer, the manner in which this squad has developed has been impressive. The plan was to integrate the newcomers with veteran playmakers among the upperclassmen, such as wide receivers Tashaun Webb and Jahzae Kimbrough and all-purpose athlete Carmelo Taylor. The plan came together.

The key to it all was probably the cool-headed Beasley’s swift development at QB. Occasionally alternating with more of a run threat Taylor, as the two of them did against Massaponax, Beasley has thrown for 1,804 yards and 18 touchdowns as a 61.8% accuracy passer.

Webb added defense to his repertoire in the last three games.

“It’s been a lot of fun,” he said of his recent two-platoon duties. “Lots of action.”

One of the revelations this fall was Derey’s blocking skills, a primary reason he got the nod at tight end.

“At first I thought I would play JV freshman year and maybe next year as well,” said Derey, whose father Walt is a PH assistant coach and played the same position as his son collegiately at Virginia. “I thought I’d work my way up. Obviously, that’s not how it went.”

Derey and Dowdy are rare ones in Fiddler’s experience.

“Before this group I’ve only started two freshman ever,” Fiddler said. “One of them is our offensive lineman J.P. Prusakowski. The other one went on to start for West Virginia.”

Of this year’s first-stringers, Webb, Kahoun and Fowler started as freshmen during the 2021 spring season. Kahoun and Brown have been major contributors defensively. Kahoun is also listed as a wide receiver. It is clear where his preferences are as to the position he plays.

“I’ve always been a defensive guy,” Kahoun said. “I’d rather be hitting than getting hit. Defense has always been in my blood.”

Brown’s nose for the football is obvious, a crucial skill for any defensive player, particularly at linebacker. He’s the team’s third leading tackler with 75 solo sticks and 48 assists. As with classmate Kahoun, you know where Brown’s heart is. For proof, ask him if he ever has the ambition to break out of the current mold and play some offense too?

The football head coaching vacancy at Virginia Tech isn’t the only one in Blacksburg.

A new coach, a new approach, a big running back and a sizable offensive line have the Buena Vista high school pushing toward a Saturday showdown with Galax.

Lord Botetourt safety, receiver has an outsized impact on his team's success

Joey Isaacs works hard, plays hard and has been on a hot streak on the football field in recent weeks as the Cavaliers head to the region final Friday night.

The fifth time meeting in the playoffs was not the charm for the Roanoke County school.

Why is Chauncey Logan Jr. better known around Salem High School as “Deuce?”

Defense stands tall as Salem heads to the state semifinals

Glenvar's path to the state football championship will involve another meeting with Appomattox County High School.