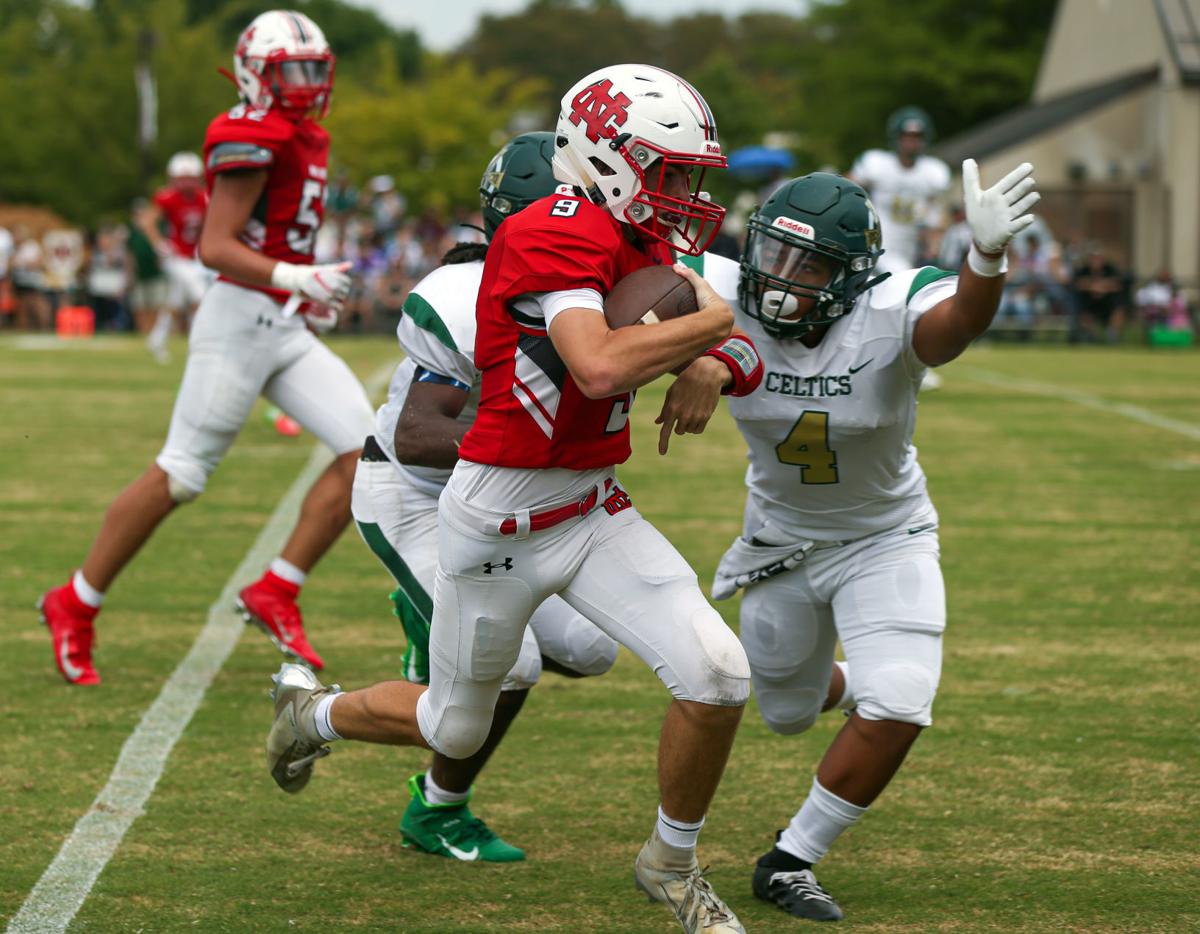 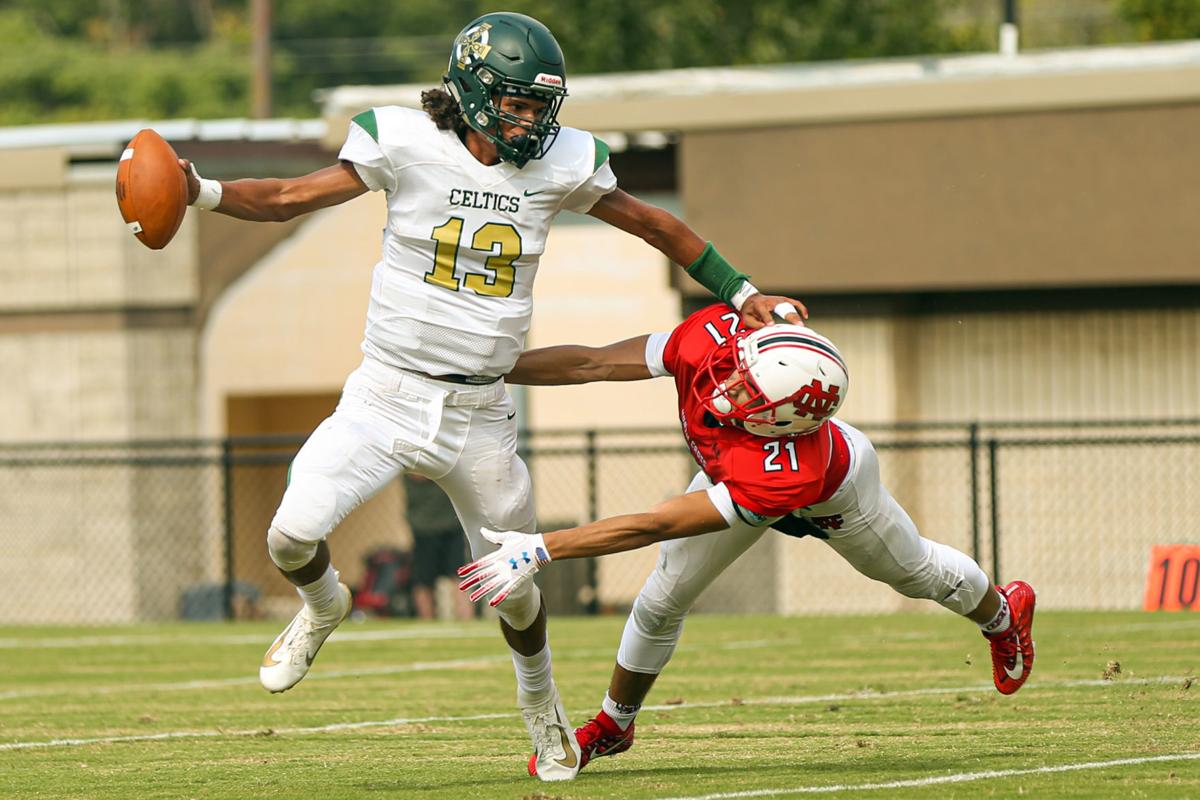 The Celtics had one of the nation’s longest active high school football winning streaks at 34 games prior to their showdown with North Cross.

And to the Raiders on a more personal level, Catholic had beaten North Cross each of the last two seasons, including a last-minute win at Willis Field in 2017.

North Cross set the meter back to zero on both counts as the Raiders held a Catholic offense that was averaging 60 points per game to 138 total yards in a 20-6 nonconference victory.

“I wish it had been a shutout,” North Cross coach Stephen Alexander said. “Our defense was unbelievable.

“I feel like our defense really controlled the game.”

North Cross (5-0) had enough offense to allow the home team some breathing room in the fourth quarter.

Quarterback Gabe Zappia threw TD passes of 6 yards to Zae Baines and 4 yards to James Jackson in the first half for a 13-6 lead, while halfback Isaac Harris notched an insurance TD with a 4-yard run in the third quarter.

Harris said he and the other seniors on the North Cross roster were not about to lose to their crosstown rival three years in a row.

“All six seniors, we just made it known, we could not lose this game,” Harris said. “We just all went in, fast and furious.”

Harris said he was bent on putting an end to Catholic’s 34-game winning streak, which dated to a 2016 season-opening loss to the Raiders.

“It’s gorgeous,” the 5-foot-6, 180-pound Harris said. “It was all on Twitter, like seventh-longest streak in the nation. As soon as I saw that, I sent it to the group-chat and said, ‘That ends today.’ ”

Harris’ inside running has become the staple of the offense.

He picked up 95 yards on 18 carries and set up the Raiders’ second TD by racing 35 yards with a screen pass to the 4-yard line.

“When you’ve got to worry about [Harris], we’re a better team,” Alexander said. “Every coach we play will tell you that.”

Harris was up to the task. With 130 yards total offense, he nearly matched Roanoke Catholic’s output.

Catholic (3-1) was still in position to grab a road win for most of the third quarter thanks to Adrian Whorley’s 17-yard TD pass to Marquis Adams with 2:47 left in the first half.

Leading 13-6, North Cross opened the second half with an onside kick, which the Celtics recovered midfield.

The visitors drove to the North Cross 27 where the Raiders stuffed a fourth-down run by freshman Jerel Rhodes.

But after Catholic’s defense forced a punt, the Celtics felt more pain on their next series.

Facing third-and-13 from his 20, Whorley was sacked by linebacker Carlton Ward for a 10-yard loss.

Whorley stayed on the turf for several minutes, left dragging his left leg and did not return to the game.

Catholic’s offense never got untracked as the Raiders held the Celtics to negative yardage on 13 of 49 plays.

Whorley had minus-14 yards on five rushes, and he passed for 56 yards as North Cross held Catholic to 2.8 yards per play.

Roanoke Catholic coach Bob Price pointed to several factors as the reason for his team’s first loss in more than 1,100 days.

“I thought they out-executed us. I thought they outhustled us all day long,” Price said. “We played a little defensively. Obviously, when our starting quarterback went out, that hurt us. That being said, I thought Sam Sweeney came in and did a great job moving the offense.”

North Cross failed to convert on two scoring opportunities, an incomplete pass from Catholic’s 11-yard line on the last play of the first half and a dropped pass by Baines in the open field in the third quarter.

Three defensive penalties including two personal fouls on Catholic’s final drive that reached the Raiders’ 17-yard line had Alexander agitated after the game.

“That was a disaster,” the North Cross coach said. “That was frustrating. We didn’t finish the game well, but we got out of here with a win.”

North Cross, which plays all its home games during daylight, seemed at home on the 85-degree day.

“We’re in great shape,” Alexander said. “We only had one kid cramp the whole game. It was hot.

“When you shake hands and the other team has tears in their eyes, you know both teams want it, but I think conditioning was a factor.”

Devin Booker to record a Triple Double in game 2 +1600

Devin Booker to record a Triple Double in game 2 +1600