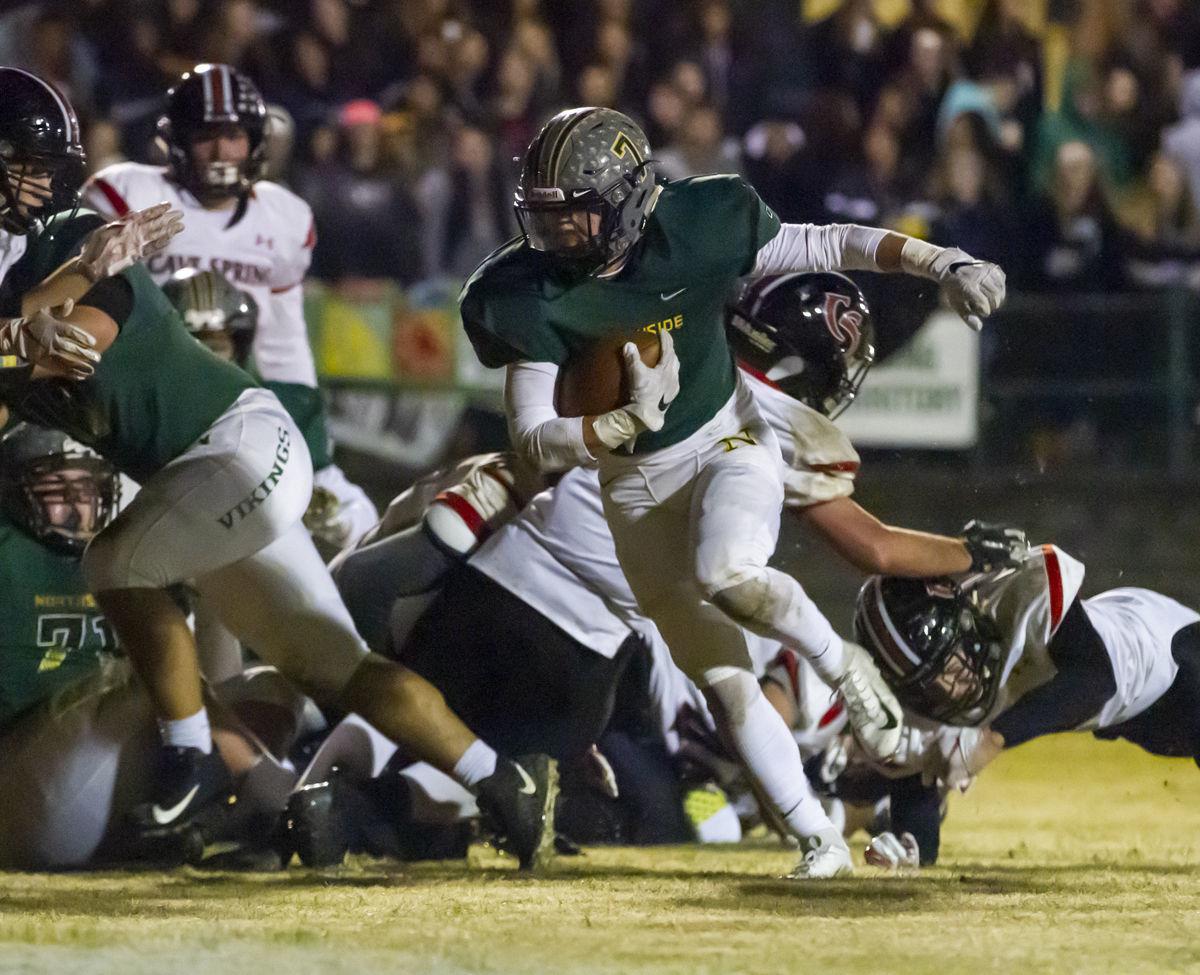 Northside’s Christian Fisher runs in for a touchdown against Cave Spring last season. 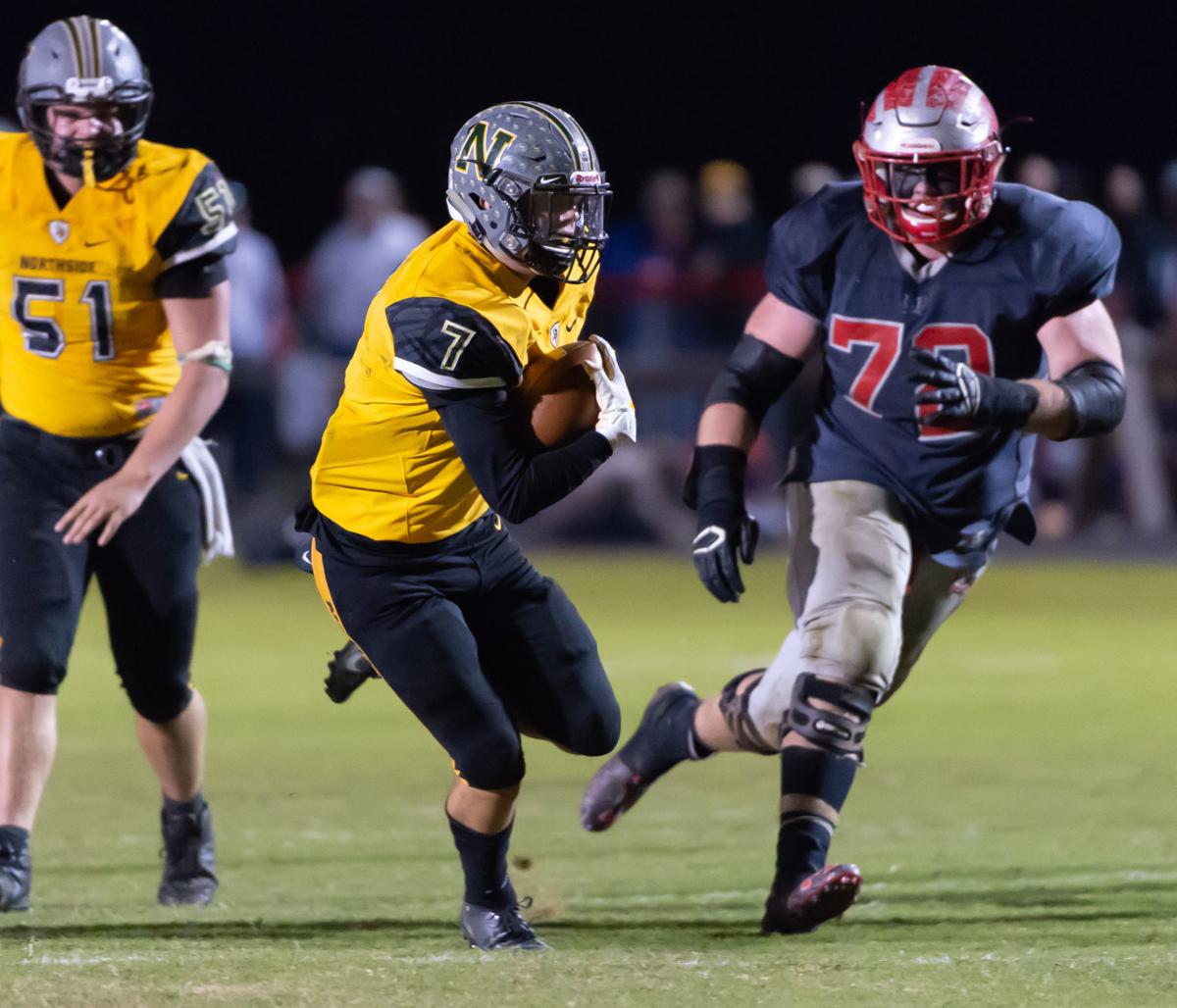 Northside’s Christian Fisher (left) breaks free for a touchdown last season at Lord Botetourt High School. Fisher opted to play in pain this season rather than having surgery on his torn labrum and shoulder cap. 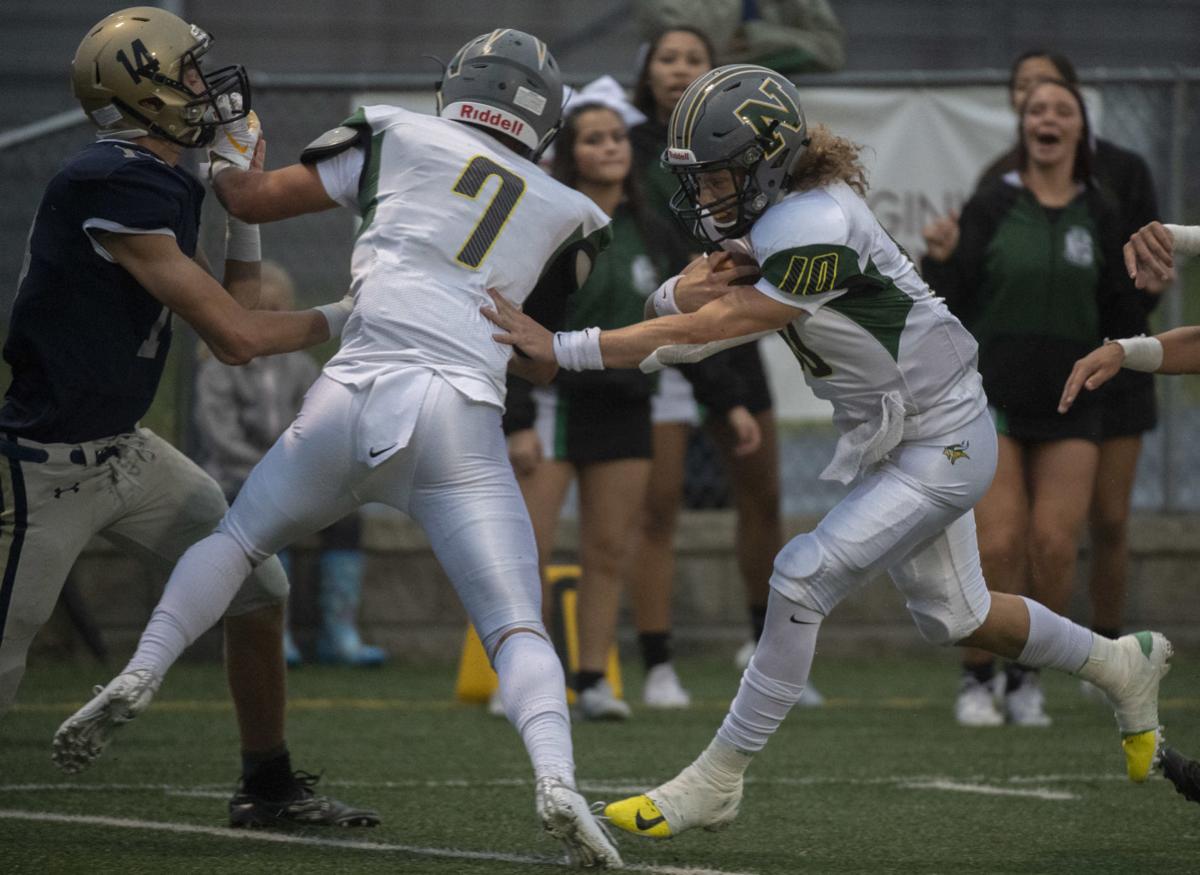 A 7-on-7 high school football passing camp is a glorified version of two-hand touch football.

No tackling is allowed.

Just throw the ball, catch the ball, run to daylight and go home in one piece.

For Northside senior Christian Fisher, the 7-on-7 at Emory & Henry College this summer was anything but.

Fisher jumped to make a reception. He collided with a defender. He landed on his right arm.

“A torn labrum and I tore the front caps on my shoulder completely off the bone,” Fisher said.

The two-way star at receiver and defensive back was given two options.

He could undergo surgery immediately and see his high school football career come to a crashing halt, or he could try to play through the pain, knowing the end was always one play away.

He chose to play in pain.

“For me, I just wanted to play with my friends,” he said.

It was not an easy call.

His father was conflicted, but much of that is because Scott Fisher is Northside’s coach.

A former football player at Carson-Newman College, the elder Fisher knew the risks, and he already had seen his two older sons hospitalized with serious injuries.

If the 6-foot, 180-pound senior completes the entire senior season for Northside, he would be the first of Scott Fisher’s three sons to do so.

Tyler Fisher’s career ended in 2011 when he suffered a compound fracture in his leg during a game against William Byrd.

Middle son Austin Fisher’s senior year came to a crashing halt in 2014 when he was badly injured as a passenger in a car that wrecked one night following a midseason game against Salem.

Christian is close to his two brothers, and not just because Tyler is a Northside assistant coach.

Both older sons still have pins, plates and screws fusing their bones.

When it came time to decide whether to play football in 2019, the Fisher DNA was a big consideration.

“I was really on the fence,” he said. “The thing that really changed my mind was my grandfather. He loves me and my brothers, and all he’s ever wanted to see was my senior season.

“That’s what really made me want to play.”

Fisher, who made first-team All-Timesland at defensive back in 2018 when Northside finished 11-2, has a limited role this year.

He is the Vikings’ leading rusher with 345 yards after moving from slot receiver to running back, but he is on the sidelines much of the time now when the opponents have the ball.

He wears a red jersey in practice, meaning he is off limits to contact.

Fisher barely played in the preseason, but one question had to be answered immediately.

Father and son had to know what would happen on that first tackle.

“He ran me to the left my first play so I’d have to get hit in my right shoulder,” the Northside senior said. “I didn’t know whether I’d be able to take a hit or not, so they wanted to get that out of the way right out of the gate.

Three games into the season, Fisher is feeling the effects.

He took himself out of last Friday’s 25-22 victory over Hidden Valley four times because of shoulder trouble.

“It’s hard to explain,” he said. “I don’t know what really happens in [the shoulder] but I feel it come out and go back in. It sends a shock through my body and I just go kind of limp.”

Fisher, who started as freshman at Northside in 2016 under former head coach Tyler Brown, might not play defense the rest of the season.

“Tackling is difficult,” his father said. “We noticed in the Cave [Spring] game he really didn’t wrap up a whole lot. He’s more of an instructor and a teacher on the defensive side.”

The 2019 season has been difficult for Scott Fisher.

A significant number of players have transferred out of the program. During a preseason banquet with the Roanoke Sports Club, the Northside coach gave an emotional summary of Christian’s injury.

Northside is struggling to field a JV team. The Vikings canceled their junior varsity game against Salem, but they hope to finish the remainder of the JV schedule.

“I can see how stressful it’s been on him,” Christian said. “Seeing people leave and hearing parents say this and that, it really just took the fun out of the game. The players lost some of their best friends who transferred to another school.”

Fisher still hopes to play football next year at another school — in college. He has Division II offers from Charleston, UVa-Wise and Concord , and a conditional offer from Davidson pending an SAT score.

He said he received positive feedback from recruiters about his injury.

“Every coach that is interested in me said they didn’t care if I played one game or I missed the whole season,” he said. “All my offers stood.”

Scott Fisher believes his son would be a solid college football player.

“His biggest asset is he’s just so smart,” the Northside coach said. “He’s been making the defensive checks since he was a freshman under Coach Brown.

“I’ve been real fortunate to watch all three of my kids play the same position under three coaches but the system has kind of stayed the same. I think he’s reaping the reward for that.”

Meanwhile, Northside (2-1) has some business Friday in its home opener against a Salem team that remembers Fisher quite well.

In last year’s 35-27 Northside win over the Spartans at Salem Stadium, he caught eight passes for 165 yards, including a 93-yard touchdown catch, and he also rushed for a TD.

“It was a big game for our team,” Fisher said. “We felt like we hadn’t proved ourself yet. Any time you win at Salem it’s huge.”

Fisher knows Northside’s first home game of 2019 could be the last of his high school career.

While that is the case for almost any football player, Fisher’s injury has accelerated his timeline.

“I hope it doesn’t happen. I feel like I’ll be able to make it through the season. The biggest thing is just trying.”

Northside’s Christian Fisher runs in for a touchdown against Cave Spring last season.

Northside’s Christian Fisher (left) breaks free for a touchdown last season at Lord Botetourt High School. Fisher opted to play in pain this season rather than having surgery on his torn labrum and shoulder cap.