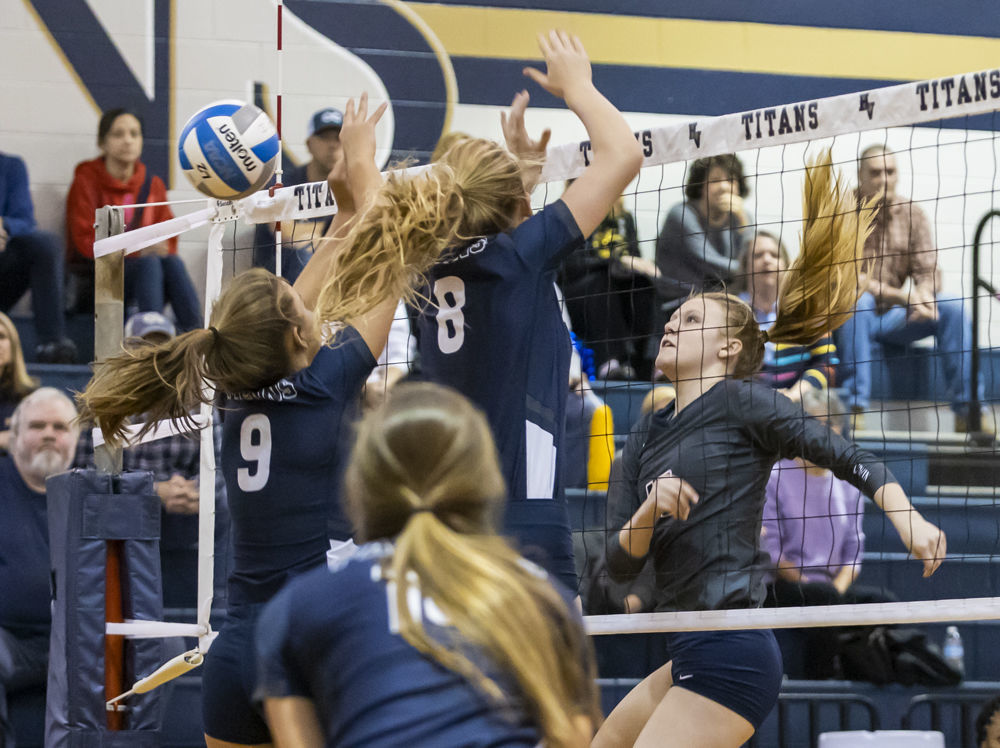 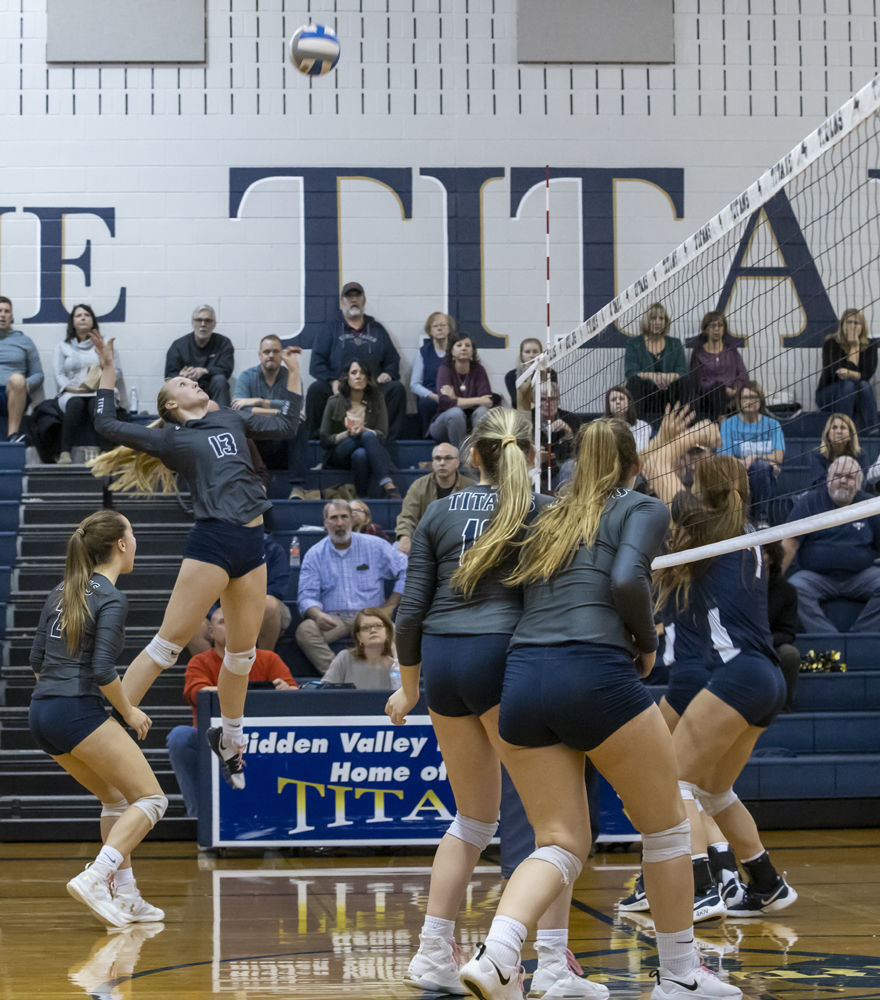 Hidden Valley’s Cam Davenport goes up for the spike as teammates Claire Nichols (from left), Faith Mitchell and Abigail Atkins look on.

After the first set of Thursday night’s Region 3D volleyball semifinal at Hidden Valley, the Titans’ video camera that was recording the match tumbled into the bleachers with a loud crash.

For a time, it appeared Hidden Valley’s season might go down the same way.

Visiting Abingdon whacked Hidden Valley in the first set before the Titans recovered for a 13-25, 25-18, 25-20, 25-11 victory to earn another berth in the VHSL Class 3 state tournament.

Hidden Valley (23-4) will play for the region title Tuesday at unbeaten Lord Botetourt. The winner gets to play the Region 3C runner-up at home Nov. 16.

With a lineup that included three NCAA Division II recruits, Abingdon (25-4) served notice, but the Falcons could not finish the job.

“They just came out way stronger than we expected,” Hidden Valley sophomore setter Faith Mitchell said. “They were good, definitely better than the teams we have played in the past.”

Mitchell had 28 assists, 15 digs and two aces for the Titans, who led 22-19 in Set 3 when the match reached a pivotal point.

The two teams contested a long point, featuring an impressive dig by Mitchell, who later set up fellow sophomore Cam Davenport for a kill and a 23-19 lead.

“She’s definitely my go-to hitter,” Mitchell said. “She can put the ball down in moments like that. Our middles were a little shaken up by their big middle.”

Farley has committed to UVa-Wise while Harless and middle blocker Kara Miller are headed to King University.

“We thought we had a pretty good chance this year,” Abingdon coach Rachel Kopp said. “We knew Hidden Valley would be tough, like always.

“They’re used to winning, but you know what, here recently we’ve been a little used to winning too. We wanted to make this one happen. It’s one of the best efforts we’ve given up here in this caliber game.”

Mitchell said Ponn accentuated the positive after the first set, in which the visitors blew out to a 13-4 lead and cruised.

“When you look over, you can see her get a little mad, but when we get in the huddle she calms us down because usually we’re on the court freaking out, going crazy,” the Hidden Valley setter said.

Now comes the test against two-time defending Class 3 state champion Lord Botetourt, which has not lost a set in 27 matches this season.

Hidden Valley is buoyed by a close five-set loss to the Cavaliers in last year’s state semifinal in Daleville.

“Coach just told us that nothing’s impossible,” Mitchell said. “We can do it. We just have to go in with the mindset that we can.”

The Titans started slowly but finished strong on Thursday to set up a regional title match on Tuesday against Lord Botetourt.

Hidden Valley’s Cam Davenport goes up for the spike as teammates Claire Nichols (from left), Faith Mitchell and Abigail Atkins look on.