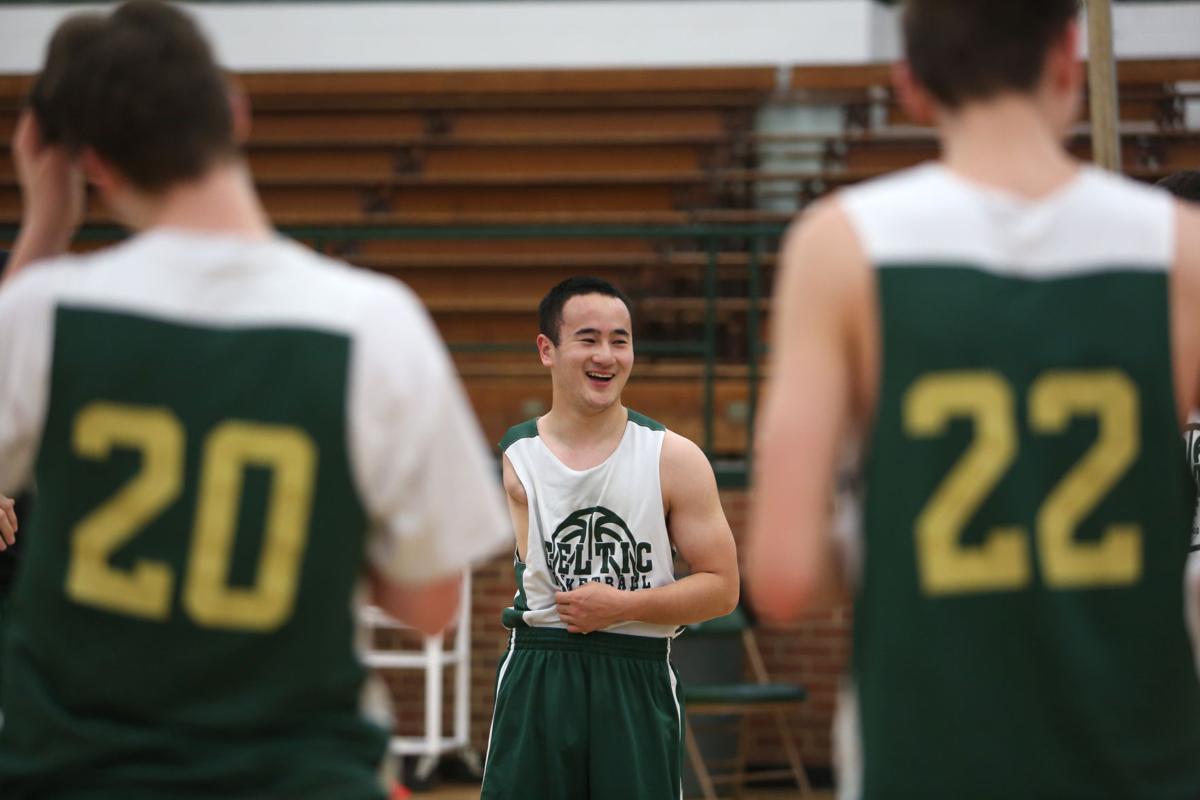 Cheng Sullivan, a senior at Roanoke Catholic gathers with the team center court during Monday’s practice. 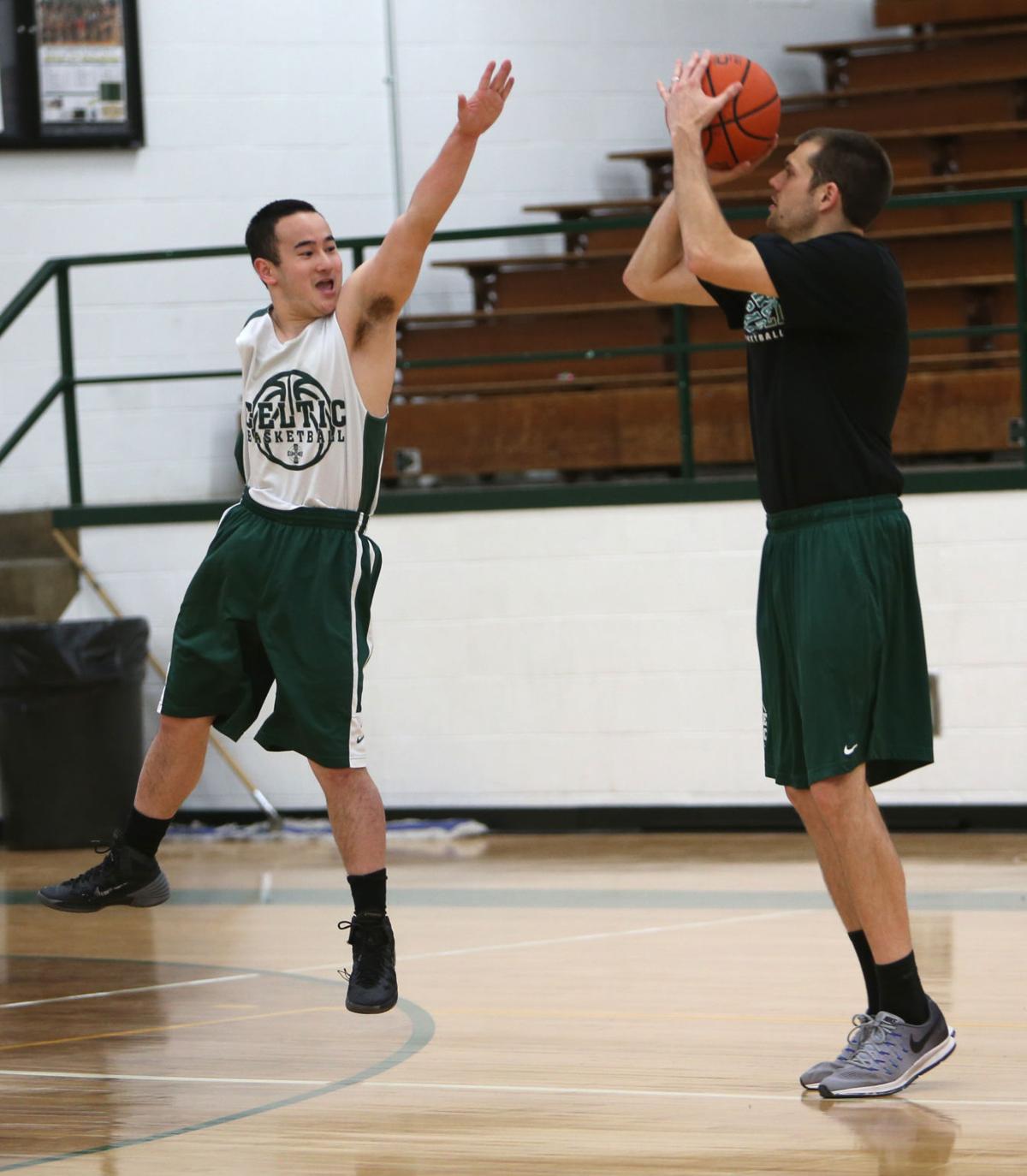 Senior Cheng Qian Sullivan has played in 15 of them.

A quick glance at the reserve guard’s body provides more than a hint why his playing time for the Celtics has been limited.

It’s obvious when you look.

Of course, there is that other physical limitation.

Maybe you missed it when Sullivan was shooting layups and knocking down left-handed 3-pointers in pregame warm-ups.

Not a big deal after all.

The arc that brought Cheng Sullivan to Roanoke was indeed a long shot.

Kathy Sullivan wanted to adopt a child, so 10 years ago she traveled to China and met a 7-year-old boy who would become her son.

She found little Cheng, who was born without a right arm, in an orphanage.

He knows nothing of his birth parents or the circumstances that brought him there as an infant.

“It’s not unusual for the birth parents to ‘abandon’ a child at a public facility so they could be found,” Kathy Sullivan said. “The parents usually go around a corner and hide someplace until an official comes out and takes the child, so that no harm comes to the child.

The adoption laws prevented children of Cheng’s age at the time from being informed of the adoption until a few days before it was finalized, thus preventing prospective parents from backing out of the deal.

Kathy, divorced and about to become a single mother, was 100 percent invested.

She first brought Cheng briefly to her home in Atlanta before making a planned move to Roanoke County. Cheng enrolled as a second-grader at Bonsack Elementary School.

“I was probably the first non-Chinese person that he ever saw,” she said.

“I always thought, ‘If I was him, would I have the courage to say, ‘Yes, I want to go live with someone who doesn’t look at all like anyone I’ve ever seen, and to go live in a foreign country, and she doesn’t even speak the words that I speak?’ ”

Cunningham was a Celtics assistant four years ago when he first saw a much smaller Cheng tossing up one-handed shots for the school’s eighth-grade team.

“The first few times I saw him shoot, your jaw kind of dropped,” Cunningham said. “It’s not just, ‘OK, he’s on the team.’ He can really play.

“Now I see it every day, so I kind of get numb to it. But it’s incredible.”

“We went to an end-of-the-season tournament in Charlotte,” Peck recalled. “We hadn’t won a game down there in a couple years.

“Right at the end of the game we missed a free throw, but he gathered it in with one arm and put it back in to win the game at the buzzer.”

Now the leading scorer for the Celtics’ varsity, Myers has been Sullivan’s friend since Cheng first showed up at Catholic in the sixth grade.

“I was excited to see what he could do, but I was just wondering how he would be able to do it,” Myers said. “But during the first open gym he was one of the better shooters out there.”

Sullivan has made five 3-pointers this season, including one in Catholic’s 52-50 victory over Eastern Mennonite on senior night, when he started a game for the first time.

He scored nine points in a win over Holy Cross, including two 3-pointers.

Cunningham played varsity basketball at William Byrd and had a four-year college career at Emory & Henry.

He knows the mechanics of shooting a basketball. When Sullivan makes a shot, he is no longer surprised.

“Cheng could probably put on a clinic with some of our guys, how to get the perfect, at least, that dominant-hand form.”

Sullivan said the lack of a right arm forces him to primarily be a perimeter shooter.

“It’s hard to drive because I can only drive to the left side,” he said. “In practice, my teammates take [the left side] away from me to help me learn and get better.”

Cunningham said no special allowances are made for Sullivan on the practice floor.

“I want to coach him just as hard as anybody else,” Cunningham said. “He deserves that. I tell the guys, ‘Compete with him like you would anybody else.’ He takes it right back to them. He’s a competitor.”

Sullivan has a prosthetic limb that he prefers not to wear.

“I never use it,” he said. “It’s kind of annoying to me. It’s uncomfortable.”

Sullivan can drive a car with the steering wheel equipped with a special knob to help him navigate turns.

How scary is that?

However, without the ability to text while driving, he might be one of the safest motorists on the road.

“We talked about that,” Kathy Sullivan said. “And he knows how dangerous it is, but he told me, ‘Mom, there’s no way I could do that if I wanted to.’ ”

“A couple days ago at lunch they surrounded me and said, ‘Did God create you like that?’ ” he said.

Mostly, Sullivan blends in on campus like any other student.

Except on the basketball court.

Tuesday night, he and the rest of the Celtics’ seniors will play their final home game when Catholic hosts Fuqua School of Farmville in the first round of the VISAA Division III state tournament.

The two teams did not play each other in the regular season. If Sullivan gets in the game, Fuqua fans could be in for a treat.

“Everybody’s cheering when he goes out there,” Myers said, “but when they actually see him do it, they’re in shock.”

Sullivan alternated between the JV and varsity squads as a sophomore. He did not play basketball as a junior, instead trying football.

All he did was make 19 of 20 point after touchdown kicks and a 22-yard field goal while serving as a backup wingback and linebacker. He plays soccer for the Celtics and said he wants to play baseball for the school this spring.

“If you watch him throw, he’s got a cannon,” Cunningham said. “I’d say he’s one of the top six or seven arms on the baseball team.

“I’ve learned a long time ago not to limit Cheng.”

Two athletes in recent years — Zach Hodskins at the University of Florida and Kevin Laue at Manhattan College — have played college basketball despite having just one arm.

Sullivan will not play college basketball. He plans to study business and already has been accepted at Belmont Abbey College in North Carolina.

For Kathy Sullivan, watching her son depart for the next step in life will evoke strong emotions.

Watching Cheng for the last decade has simply been a gift.

“We haven’t been together long enough,” she said. “We’ve only had 10 years together. Most people get 18.

“It’s inspiring to see anybody who overcomes any kind of hurdle. He didn’t want to sit on the sidelines. He just wanted to get out there and do it.”

Cheng Sullivan, a senior at Roanoke Catholic gathers with the team center court during Monday’s practice.