Marty Smith's Southwest Virginia roots, in his own words
0 comments
Share this
Only $5 for 5 months
1 of 2 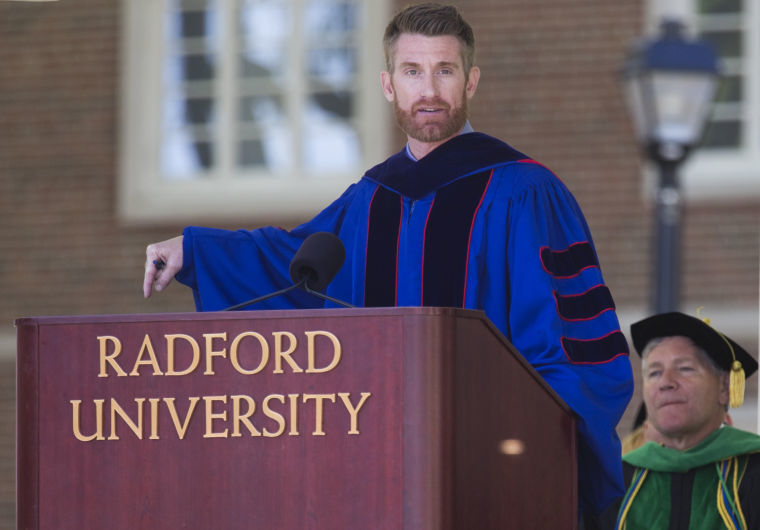 Marty Smith, who graduated from Radford University in 1998, is shown giving the Radford commencement address in 2015. Smith writes about that 2015 day in his new book. 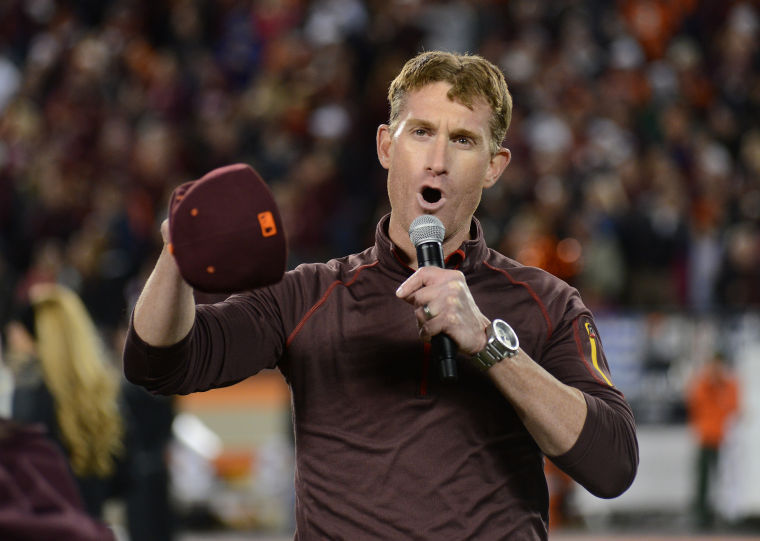 ESPN reporter Marty Smith is shown speaking to the Lane Stadium crowd before a Virginia Tech football game in 2014. Smith writes in his new book about attending Hokies games with his late father.

Giles is a rural Southern farming community. We’re red, white and blue — redneck, white liquor, and blue collar — thirty winding mountain miles off the nearest interstate, I-81. It might as well be three hundred miles. We like it that way.

On cruising in Pearisburg: There’s a Pizza Hut in the middle of town, and a Hardee’s and a Dairy Queen over toward the west side. … In my day those three restaurants were navigational beacons for the teenagers cruising town in their Dodge Daytonas and Chevy S-10s.

On playing for the Giles High School football team: Since we were four years old, every last one of us had dreamed about pulling that Giles Spartans jersey, red with white numbers and white and Columbia blue stripes on the sleeves, over our shoulder pads, and to hear Mr. Harold Chafin, the public address announcer, say our names over the loudspeaker.

On going to the mall: New River Valley Mall was thirty miles away in Christiansburg, and Valley View Mall was sixty miles away in Roanoke. Roanoke was like Manhattan for us. The Star City. The big city. Like many teens, we barely had any money, so we’d get an Orange Julius smoothie or a small TCBY sundae and just walk around the mall looking at girls. Eventually, we’d head over to the Walmart.

On inviting his future wife, Lainie, to join him and a pal at Walmart when they were Radford University students: I called Lainie. “What are you up to? Foster and I are headed over to the Wally World. You wanna come with us?”

On his paternal grandmother, Eunice Smith: When she did die, in 2012, my sister Stacy and I were the only Smiths left to address the reception line. We stood there for four hours. It felt like the entire New River Valley showed up. My gran took tremendous pride in the 2,958 students she taught to type and “keep house” at Christiansburg High School.

On his mother, Joy Smith: Mom painted the glass front door to our thousand-square-foot brick home top-to-bottom with a life-sized Spartan player wearing number 9 — my number — chosen in fourth grade for two reasons: Momma’s birthday was December 9, and Michael Jordan wore jersey number 9 in the 1984 Olympics.

On his father, Leo Smith: He was very generous to the community — especially my high school athletic teams. If we had a road trip, it wasn’t uncommon for him to pick up the McDonald’s tab for the entire team. Once, during a football playoff trip to the coalfields, we stopped at the Western Steer — which to us may as well have been Morton’s — and Dad bought steak dinners for every player and coach in the program.

On attending Virginia Tech football games with his father: There were some rare Saturday mornings when he’d blow into my room, rustle me awake and say, “Boy, get dressed. We goin’ over the mountain.” That was code. That meant we were headed to Blacksburg to scalp a couple of five-dollar tickets, climb to the highest reaches of the west grandstands in Lane Stadium, and watch the Virginia Tech Hokies play football.

On returning to Radford with his wife and old college pals so Smith could give the commencement speech in 2015: I was surprised to learn that the men’s soccer team lived at my old haunt, 527 Fairfax Street. They were equally surprised when we strolled down Fairfax on foot, rolled right up onto the front porch, grabbed a beer and hung out awhile. They took me on a tour of the house and back in time.

Marty Smith, who graduated from Radford University in 1998, is shown giving the Radford commencement address in 2015. Smith writes about that 2015 day in his new book.

ESPN reporter Marty Smith is shown speaking to the Lane Stadium crowd before a Virginia Tech football game in 2014. Smith writes in his new book about attending Hokies games with his late father.