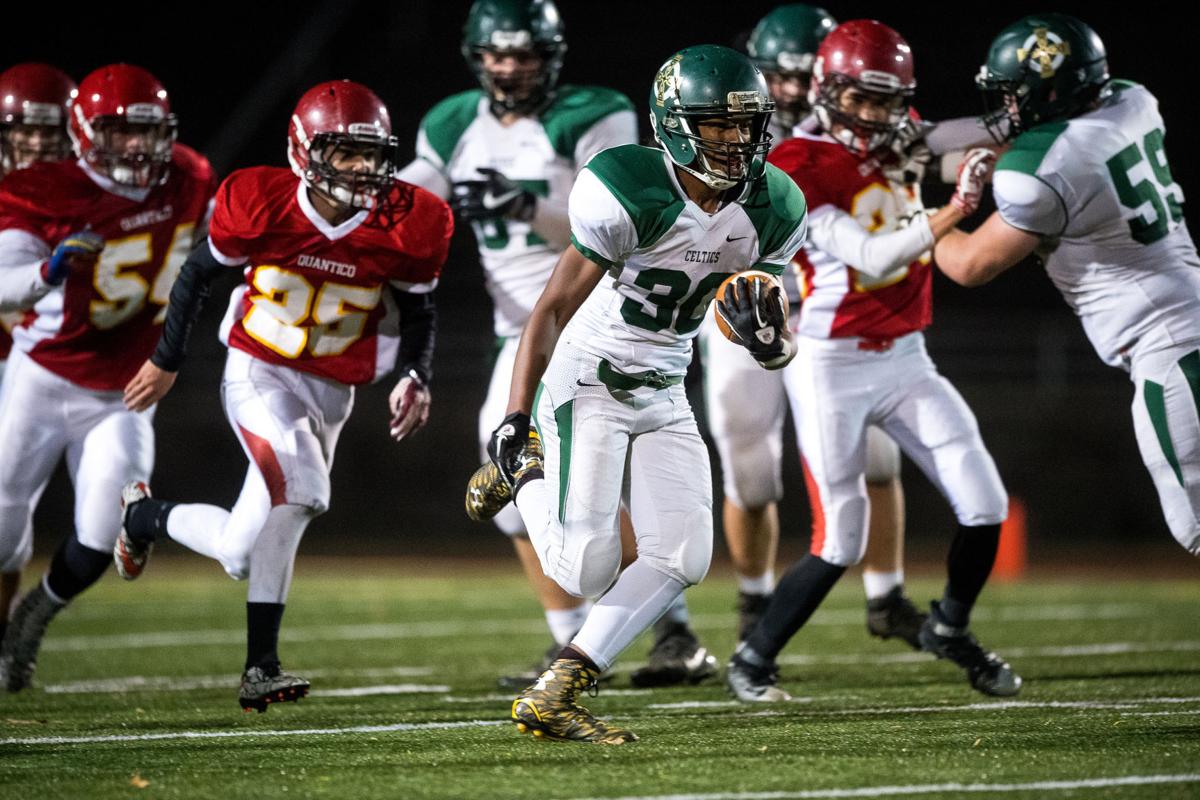 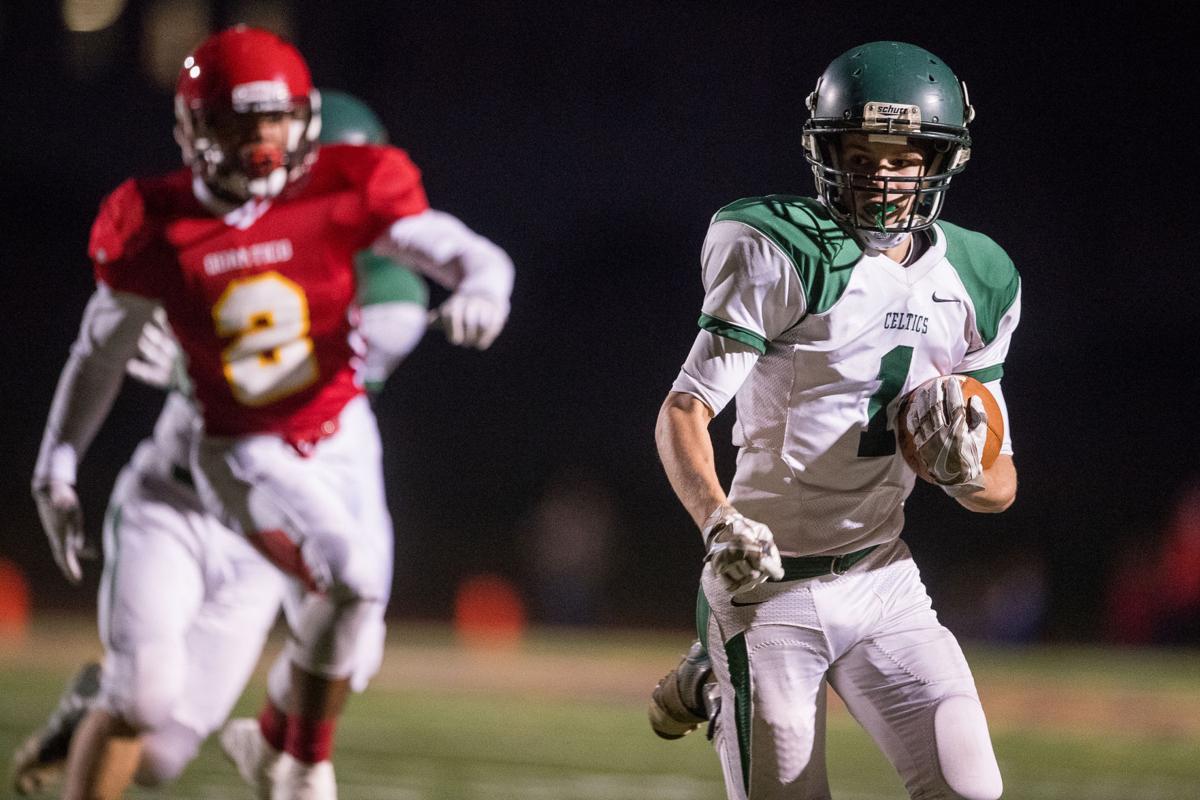 Roanoke Catholic's Chris Pyle races to a touchdown on a reverse on Friday against Quantico. 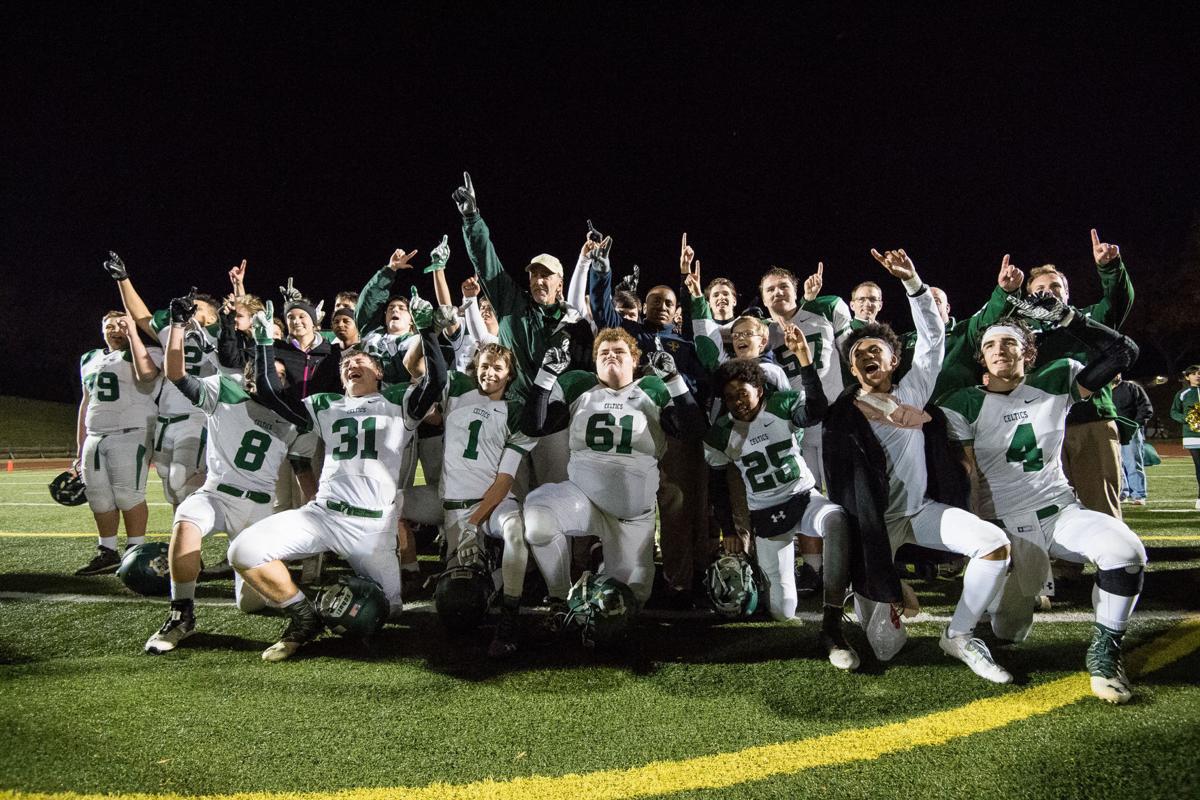 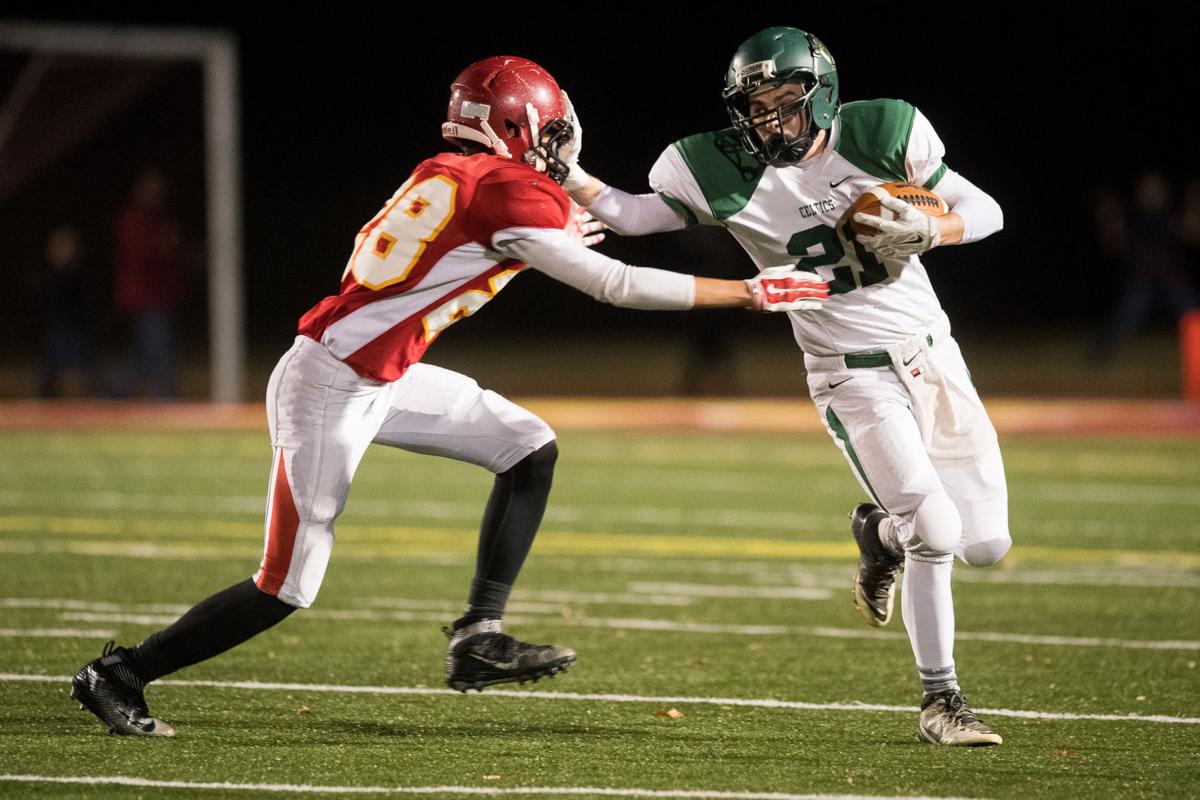 QUANTICO — Facing second-and-goal from the 8-yard line, Jack Kuehler put his knee on the ground.

The Roanoke Catholic quarterback turned around and looked at the scoreboard behind him — 22 seconds remained. That was the last play. The game was over.

Kuehler didn’t know how to react. First, he ran toward midfield. He then took his helmet off. He started to leap around. He screamed to the sky. Then, he fell the turf.

“I laid down and just heard the roar from the crowd come in,” said Kuehler, a senior. “It’s like nothing I’ve ever experienced.”

While Kuehler showed jubilation, Celtics senior Ian McInnis collapsed to the ground after starting to walk toward his team following the final play. He brought his knees to his chest, put his face in his hands and started crying.

“It’s sad it’s over, but it’s one hell of a way to go out,” said McInnis while still wiping away tears with his waist towel. “It’s surreal right now that we won. The team that we played was a great team. It was just phenomenal heart from both teams.”

Roanoke Catholic fullback Mykah English led the team with 187 yards on 31 attempts with three rushing touchdowns. English did that despite injuring his tailbone in the first half, which had him grimacing as he walked around the field after the game.

Celtics coach Bob Price found it hard to reduce English’s carries in the second half after his injury because of a leg injury to running back Jemel Tyree, who had 10 carries for 83 yards and a touchdown with his last carry at 9:20 in the third quarter.

“It’s his best game so far,” Roanoke Catholic receiver/defensive back Chris Pyle said of English. “I knew he had it in him, but I just haven’t seen him need to do it yet. When he needed to, he was clutch, and he did it.”

Pyle, himself, made a play emblematic of the Celtics' desire and preparation to capture Friday’s state title.

Roanoke Catholic took a 22-7 lead late in the second quarter, and Quantico faced third-and-3 on its next drive. Quantico quarterback Max Brown released a deep pass while being hit. The Quantico receiver waited as the pass floated toward him, but Pyle didn’t wait. He instead sprinted from his position behind the receiver to jump in front and intercept the pass.

“Every day in practice, we practice reacting to the ball and bouncing forward and catching it in between the receiver and the quarterback,” Pyle said. “The coaches’ lessons really helped me right there to get my body to react to that instantly.”

That interception allowed Roanoke Catholic to consume the majority of the time remaining in the first half.

Pyle then scored the touchdown on a receiver reverse to end the first drive of the second half to show this Roanoke Catholic team, unlike last year, would not let a halftime lead slip away. His 27-yard run on a fourth-and-8 play set the tone for the second half.

A tone that ended with Kuehler’s knee on the ground.

“We finally did it,” Kuehler said. “We did what we wanted to do all season, what we talked about the whole season. This is probably going to be my last game of football, and I’m glad we went out the way we did. We are No. 1. We are champions.”

Roanoke Catholic's Chris Pyle races to a touchdown on a reverse on Friday against Quantico.