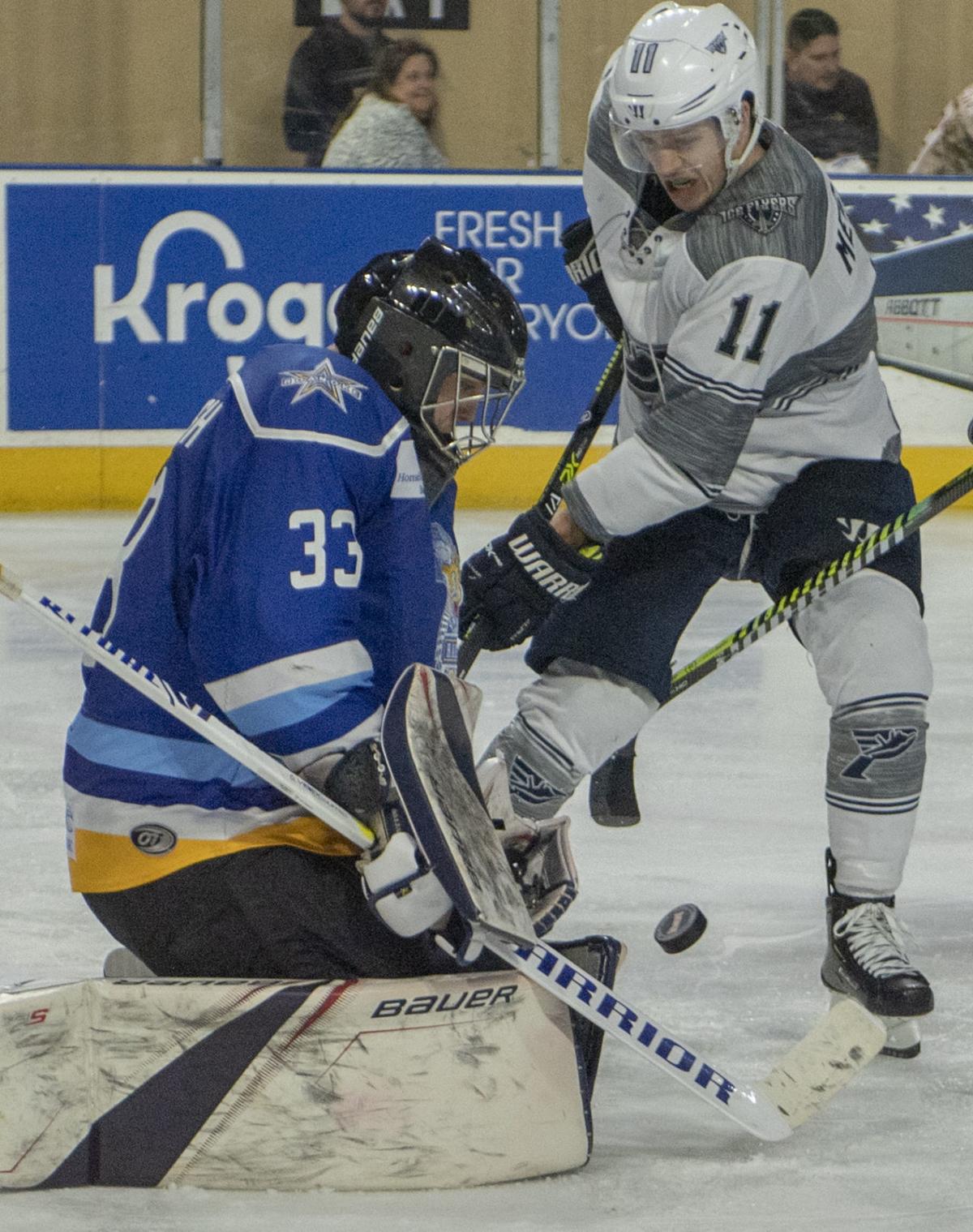 Roanoke Rail Yard Dawgs goalie Austyn Roudebush deflects the puck for a save against the Pensacola Ice Flyers’ Patrick Megannety during a game in January 2020. 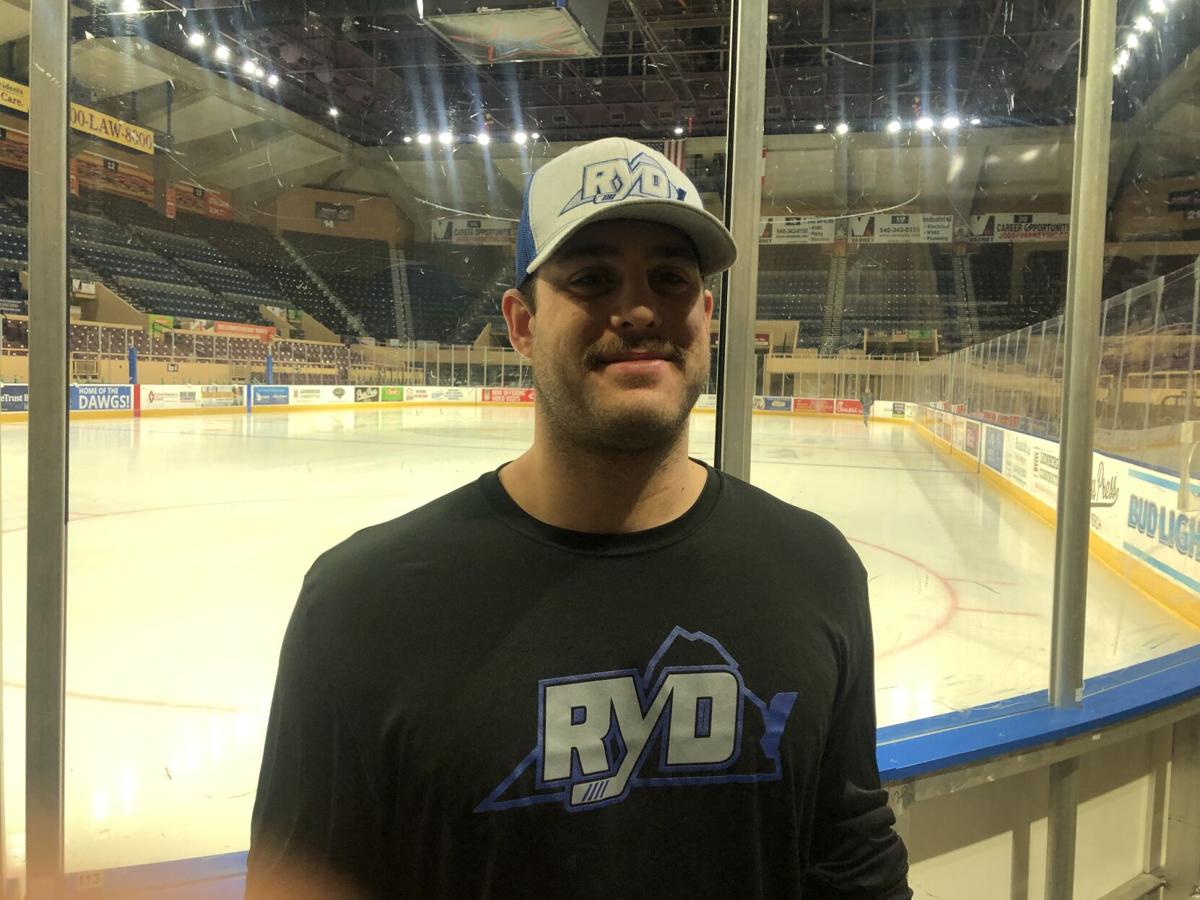 Roanoke Rail Yard Dawgs goalie Austyn Roudebush enters the weekend with a 9-4-4 record as a starter, including two shutouts.

A self-described “lazy kid” growing up in Ohio, Austyn Roudebush particularly dreaded when his father and youth hockey coach would hold conditioning skates for the team. Dennis Roudebush would yell and scream and cajole, trying to get every ounce of sweat he could out of the boys to make them better.

“Him making me skate, I hated it,” Roudebush recalled Wednesday at the Berglund Center. “So I thought, ‘I’ll just play goalie since no one else wants to.’”

His father bought him some goalie pads and let him try the position. Roudebush loved it immediately.

But there was one problem.

“I later found out,” he said with a smile, “that he was still going to make me skate, whether I had pads on or not.”

Bummer. But hey, at least the equipment had been purchased and his destiny set. Roudebush was going to become a goalie — and a fine one.

Years later, nobody would dare call him lazy. A key part of the Roanoke Rail Yard Dawgs’ resurgence this season, Roudebush is one of only three goalies in the Southern Professional Hockey League who’ve played at least 1,000 minutes.

He crossed that threshold last Friday during a performance he’d rather forget — four goals allowed in a loss to Peoria — but such off games have been rare for the 28-year-old Toledo native. Roudebush has gone 9-4-4 as a starter, including a pair of shutouts.

On Dec. 21, Roudebush was named the SPHL co-Player of the Week along with Dawgs teammate Henry Dill after saving all 25 shots he faced in a 4-0 blanking of Evansville. He closed the calendar year by beating Fayetteville and first-place Huntsville on back-to-back nights, conceding just one goal in each game.

“Goalies are in their own world, especially when you’re in the net,” Roudebush said. “It’s just you and the puck. That’s the only thing you think about. It’s all you watch. You don’t really watch the play a whole lot — well, you do anticipate — but yeah, goalies have to be in their own world.”

In October, Roudebush was invited to training camp of the ECHL’s Toledo Walleyes. When his hometown team ultimately didn’t have a spot for him, he returned to Roanoke, which was elated to have him back.

“He really fits what I think my ideal goalie is in our system,” Dawgs coach Dan Bremner said of the 6-foot-3, 220-pound Roudebush. “That’s a big body. He’s athletic. But most importantly, he makes the saves that he should. There’s some goalies out there that are going to make those crazy saves, which Austyn will do every now and then. But I want him to make every save that he should — those straight-on shots where he makes the save with the big blocker.”

Roudebush made the lion’s share of the starts for the Dawgs while Dill was on the injured reserve list for more than 50 days early in the season. The two goaltenders are roommates and close friends, so Roudebush was thrilled when Dill was activated Dec. 10.

Now the Dawgs have the luxury of two healthy goalies they trust. Dill is slated to start Friday’s game at Fayetteville, but Roudebush likely will see action over the weekend when Roanoke hosts Fayetteville twice.

“You come to play,” Roudebush said. “Nobody wants to sit on the bench and watch, but you always hope that the other goalie does really well. It’s part of being a team. Playing a lot of minutes, you’re able to stay tuned in to what’s going on. You’re always on the ice, you’re always in games.”

Roudebush played junior hockey in both Ohio and Canada before logging four seasons at Division I Adrian College. He thought 2019-20 would be his final pro season in the Federal Hockey League before the Dawgs called him up to the SPHL at the end of the year.

When the pandemic canceled Roanoke’s 2020-21 season, he played with league-rival Knoxville, putting up a stellar 1.62 goals against average.

He’s happy to be back in a town where there’s a whole lot of skating and no room for laziness.

“I think the overall vibe in the room is guys want to win, guys want to get better, guys want to go to war for each other,” he said. “That’s what I really enjoy about this team: Everyone’s bought in.”

Nick DeVito scored the game-winning goal with 4:26 remaining, and the Roanoke Rail Yard Dawgs defeated the Fayetteville Marksmen 3-2 on Saturd…

FAYETTEVILLE, N.C. – Matt O’Dea provided a goal and an assist, and Henry Dill registered 26 saves to lead the Roanoke Rail Yard Dawgs to a 4-1…

Dawgs close out 2021 with home cooking

The Roanoke Rail Yard Dawgs look to extend their six-game points streak as they host the Peoria on Friday and Saturday nights.

Goaltender Austyn Roudebush sparkled for the second straight night, and Matt O’Dea scored the go-ahead goal early in the second period to lead…

Jeff Jones scored the go-ahead goal – his 50th for the franchise – late in the second period, and the Roanoke Rail Yard Dawgs defeated the Fay…

Goaltender Austyn Roudebush sparkled for the second straight night, and Matt O’Dea scored the go-ahead goal early in the second period to lead…

Roanoke Rail Yard Dawgs goalie Austyn Roudebush deflects the puck for a save against the Pensacola Ice Flyers’ Patrick Megannety during a game in January 2020.

Roanoke Rail Yard Dawgs goalie Austyn Roudebush enters the weekend with a 9-4-4 record as a starter, including two shutouts.