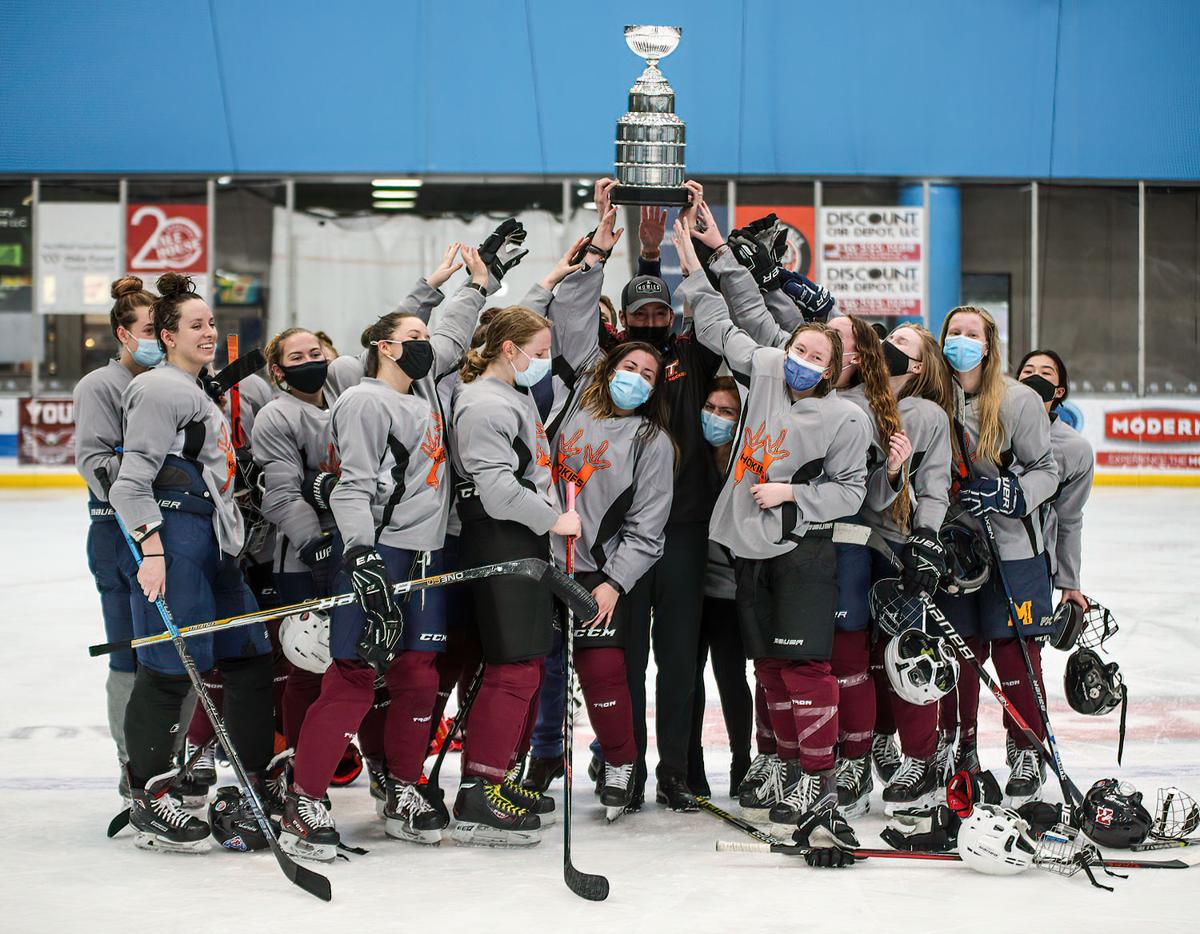 After building the Virginia Tech women’s ice hockey team from the ground up, Lily Espino and Samantha Grey marveled at how far they’d come after its first title. 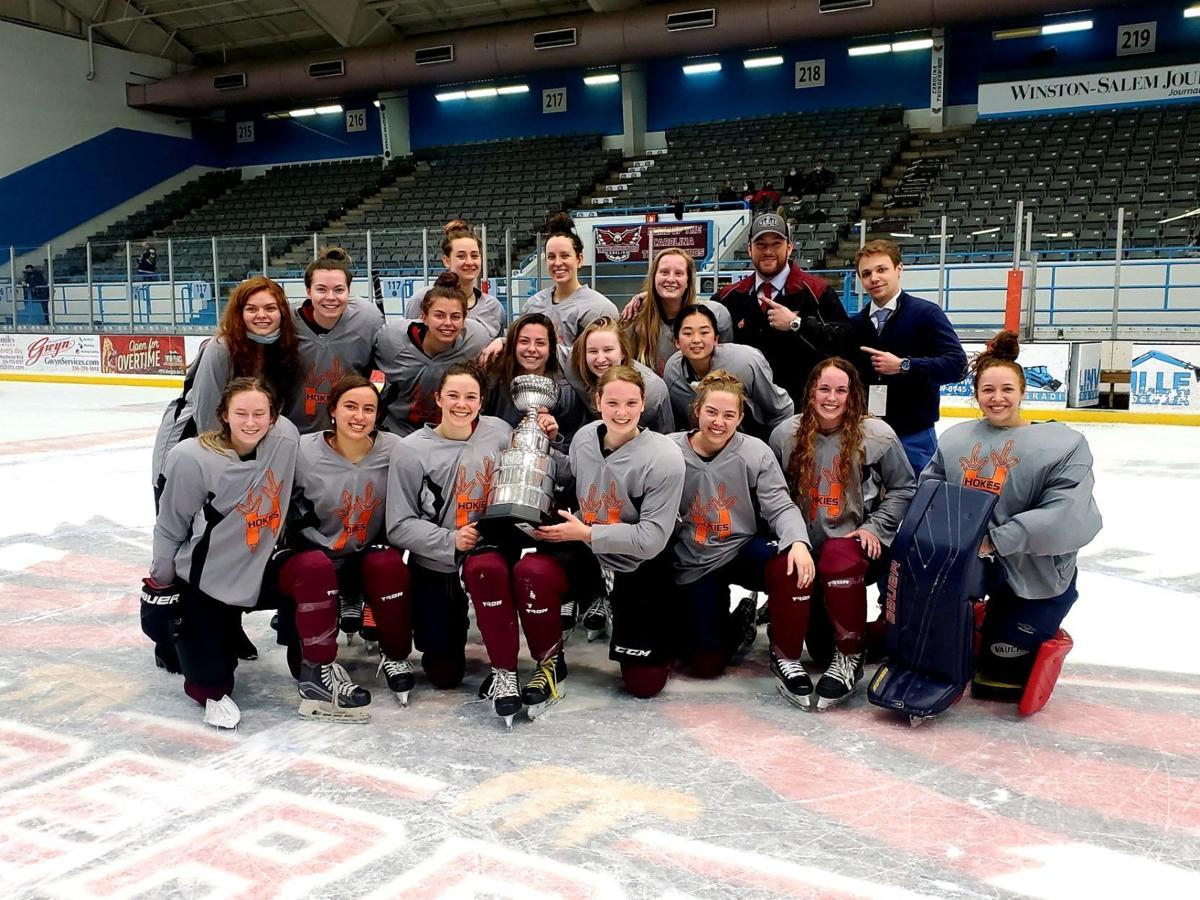 Just a few months ago, Espino was helping teach her inaugural women’s ice hockey team at Virginia Tech how to put on gear. The team has fluctuated from 17 to 19 members, many of whom had never played before this season.

And yet, on March 20, Espino and her Hokies hoisted the Atlantic Coast Collegiate Hockey League championship trophy after beating N.C. State 9-7 in Winston-Salem, N.C., to cap the league’s first season.

Women’s ice hockey is not a Tech varsity sport. Espino and fellow junior architecture major Samantha Grey are the team co-founders, and the ACCHL title culminated two-plus years of arduous work that started with getting the Hokies on the ice.

“I hugged Samantha and my coaches, they’ve given us everything,” Espino said of her emotions upon raising the cup. “I just started laughing because I was in shock a bit. It was a moment to soak it all in, it was very gratifying, it just felt earned.”

The Hokies and Wolfpack were the only women’s teams in the ACCHL able to compete this season because of the pandemic. Georgetown, George Washington, Virginia and West Virginia also have teams, but were sidelined because of COVID-19 restrictions.

N.C. State had beaten Virginia Tech twice in the regular season, 11-0 and 13-1. So the Hokies were big underdogs going into the final.

“Everyone in the building was shocked,” Grey said.

Tech led nearly all of the contest. Sarah LaPorte opened the scoring about six minutes in, assisted by Kat Fichera. Then Lily Harp scored unassisted a few minutes later, and soon netted another goal off assists from LaPorte and Holly Turner to give Tech an early 3-0 cushion.

N.C. State fought back to tie the game 41 seconds into the third period, and took its first lead at 6-5 with 14:55 remaining. But Brenna Neuman tied things up again with her second goal of the match just 54 seconds later. Espino then scored to make it 7-6. Holly Turner netted what turned out to be the game winner with 6:58 left, and Fichera added an empty-netter at the end.

Espino went right for the cup when the final horn sounded.

“The excitement that this group of girls has for each other, how much we enjoy the game, it was incredible, there’s just nothing like it,” Espino said.

In that moment, Grey couldn’t help but think of how far her team had come since its double-digit losses to the Wolfpack.

“It was pretty wild,” she said. “They were expecting to walk away with it, and we just didn’t give them that chance.”

The team also plays a game a week in the Roanoke Developmental Hockey League against local adult teams. The players routinely get up around 4 a.m. during the week to drive to a rink in Roanoke for 6 a.m. practices. When they’re not able to get ice time, they do what drills they can in Blacksburg on land.

Espino said, after the first couple of losses to N.C. State, the mentality of practices intensified.

“There was a lot more chemistry,” Espino said. “We’d just gotten to know each other more, we did team bonding, it’s been difficult because of COVID, I’m sure for everyone, to get to know other people and we just battled through and got to know each other and were together pretty much every single day.”

Grey and Espino said the team has developed a close bond with a “big happy friendly hockey community” in Roanoke. Bruce Abramski runs the RDHL; he’s also been instrumental in the growth of the team, they said, functioning unofficially as a coach.

“They’re so proud and happy that we’re growing and getting better,” Grey said of the Roanoke hockey community. “It’s really comforting and it does strangely feel like a family.”

The Virginia Tech men’s club team has supported them throughout the process of starting the team, Espino and Grey said. But Espino said disparities between the men’s and women’s games are impossible to ignore, particularly coming up through the youth ranks.

“Growing up in the hockey community, at a certain age you start having to use your own locker room,” Espino said. “When you play on a team and you’re the only girl, that’s really isolating. Growing up with that, I just hope it’s not like that for younger girls.”

Younger girls in the Roanoke Valley in grades one through four have come out to the skate with the team before. Grey and Espino said the best thing they can do to help bridge disparities between men’s and women’s sports is to inspire the next generation, to let young girls know they can do anything the men can do.

“Them looking up at us and learning how to skate and play, and just having fun with little kids and letting the game grow I think [is] a big part of that,” Espino said, “helping bridge those disparities in general.”

Espino and Grey will study abroad during their fourth years, and they are working to pass on the leadership mantle.

“It hurts to have to pass it down early,” Grey said. “We’re lucky we have a great team. There’s an incredible culture. I don’t think they’ll have too much of an issue.”

Tech’s architecture program runs for five years. So Espino and Grey hope to have one last run at hoisting another trophy with the team they’ve built from the ground up.

“I’m counting on coming back for my fifth year and raising that cup again,” Espino said with a laugh. “There’s no doubt in my mind that I’ll be back for that.”

The Green Wave has not give up a single point in any of its five games, outscoring the competition 222-0.

After building the Virginia Tech women’s ice hockey team from the ground up, Lily Espino and Samantha Grey marveled at how far they’d come after its first title.