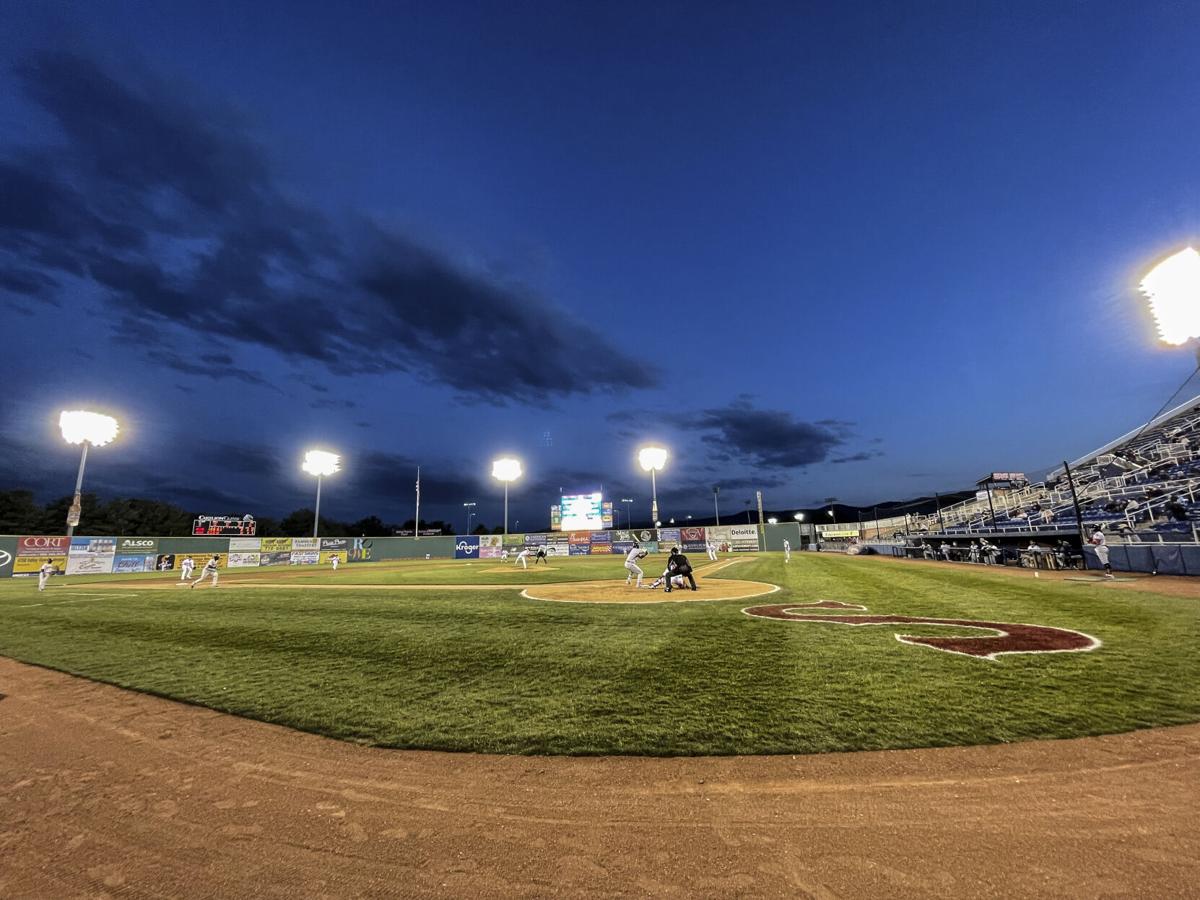 A comfortable spring evening, freshly mown grass, and baseball for the first time in nearly two years made for a good home opener for the Salem Red Sox. 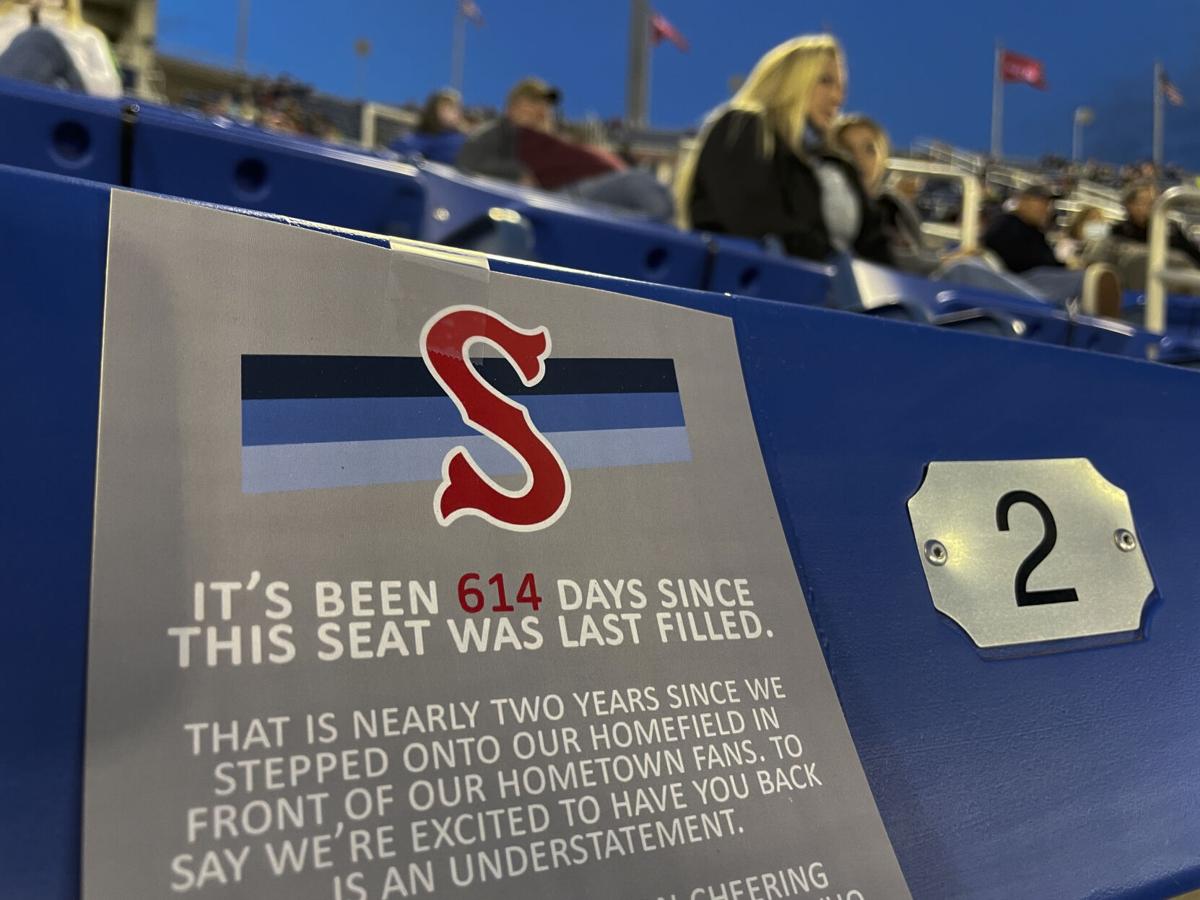 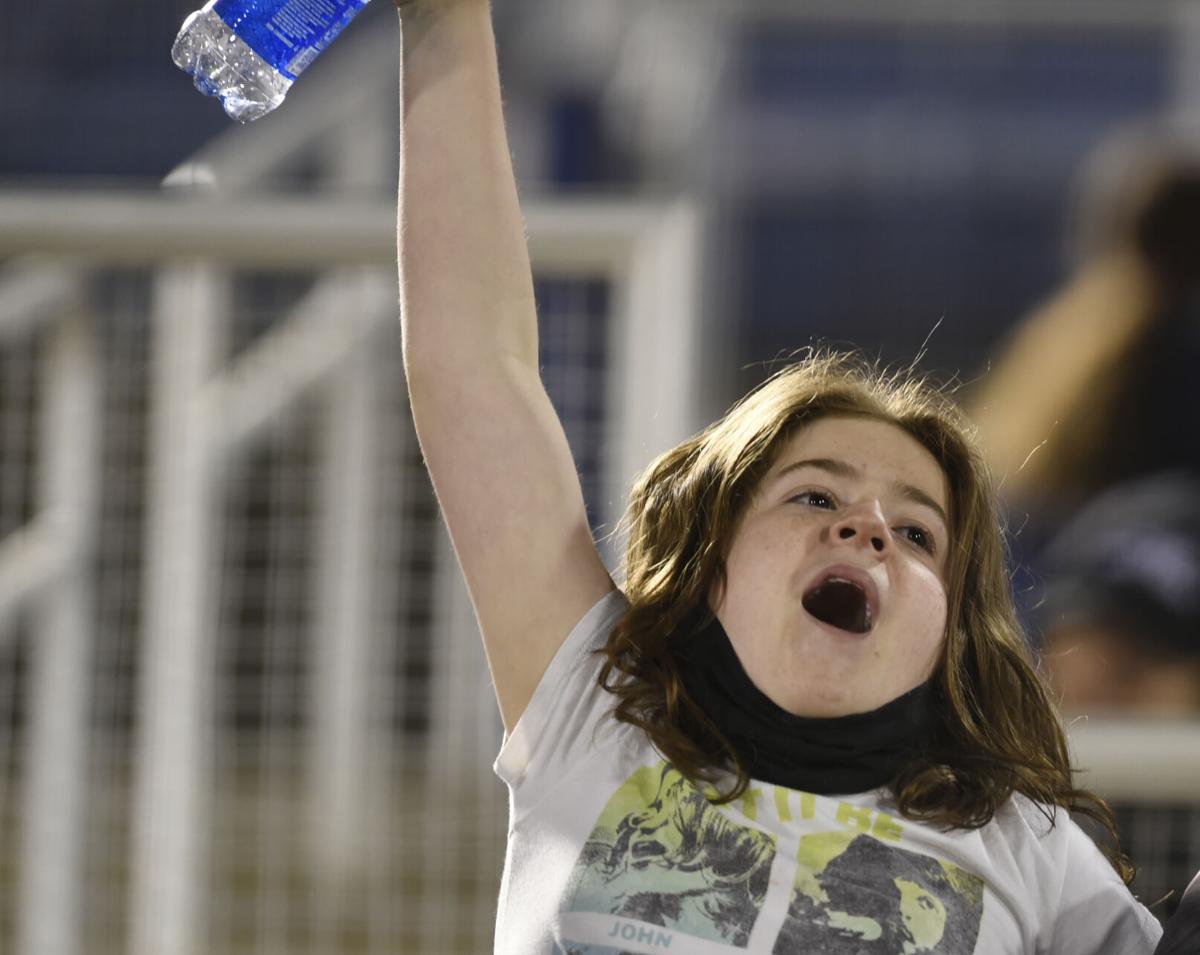 A fan sings along to Neil Diamond’s classic “Sweet Caroline.” 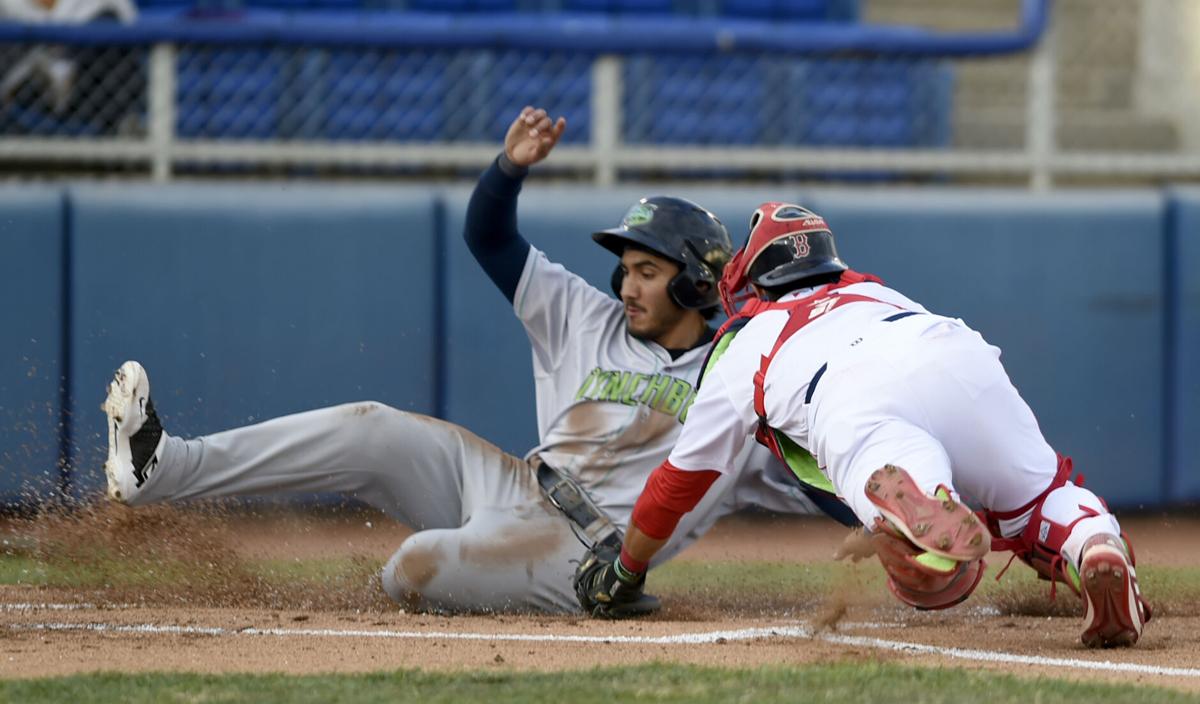 Lynchburg outfielder Julian Escobedo (left) slides into home, avoiding the tag of Salem Red Sox catcher Jaxx Groshans to give the Hillcats a 1-0 lead in the first inning Tuesday night.

The first foul ball of the new season popped off the bat of Lynchburg’s Julian Escobedo, soared over the Salem Red Sox dugout and bounced on the concrete walkway in the left field stands.

Gwendolyn Sisk had it measured. Wearing her Michael Chavis jersey and a pink and white ballcap, the 7-year-old bolted from her seat in section 112 and ran it down.

She proudly held the souvenir aloft to show her parents and her older brother, Parker.

Let’s see a cardboard cutout do that.

Tuesday’s opening night at Haley Toyota Field was a vital step, a beautiful step — and, yes, an imperfect first step — in our return to sports normalcy.

Long lines developed at the concession stands as staffers tried to get back in the groove after 19 months without a game. General manager Allen Lawrence anticipated some issues would arise — they always have on opening night, even before COVID-19 was a thing — but he vowed they’ll learn from them and quickly become more efficient.

The home team didn’t exactly put on a great show. Lynchburg drilled the Sox 10-1 while outhitting the hosts 16-4.

Wilkerson typically attends about five games per year. It was important for him to be at the opener, though, because his 7-year-old son, Jack, had been talking about it all last week.

Father and son stood on the left field concourse together in the early innings, watching the action. Behind them, Wilkerson’s wife, Brittney, held their 1-year-old son, Colt, who was attending his first-ever game.

“It’s been really good,” Brittney Wilkerson said. “We actually rarely get to go out, so when we find the opportunity, we like to take advantage of that.

“It’s really nice seeing the kids’ reactions and just being out in the open and watching the game.”

The weather cooperated. Fans were met with sunny skies and 72-degree temperatures at first pitch.

Up in the top row of the general admission section, Josh Headen of Salem sat on a folding chair a few feet away from his wife, Laura, and 8-year-old son, Kane. The seats right next to his family had been zip-tied — like thousands of other seats in the 6,300-seat venue, to create MLB-mandated social distancing — so an employee had brought him a chair.

“It’s awesome!” Josh said of being back.

“He doesn’t even care that he’s sitting in a folding chair!” Laura said with a laugh.

“Look at me, for God sakes,” Josh said. “I’m so happy to be back at the ballpark. The people that work here are so awesome. I’ve never met anybody that doesn’t love their job here — or at least they act like they love their job.”

The Headens try to get out to as many games as they can from Thursday-Sunday. Josh, 37, has been attending pro baseball games in the city for decades — one of his earliest childhood memories was watching Tim Wakefield pitch for the Salem Buccaneers in 1990 — so it was devastating to have a season with no games to attend.

They tried to quench their baseball thirst last summer by buying the MLB TV package, but it wasn’t the same.

Back down in section 112, where his daughter Gwendolyn had nabbed her prized foul ball, Matt Sisk talked about the “hole in our summer” that was the 2020 canceled season. This is the fifth year they’ve had season tickets.

The seats next to his family were tied down. Masks covered the faces of folks in line for food. But like so many others here, he was simply glad to be where he was at that moment.

“It’s a little different because the crowd is thinner,” he said. “But it’s familiar in a really good way.”

Photos: From the 2021 home opener for the Salem Red Sox

The Red Sox have some of their top young prospects playing in Salem this spring. Here's a quick guide.

A comfortable spring evening, freshly mown grass, and baseball for the first time in nearly two years made for a good home opener for the Salem Red Sox.

A fan sings along to Neil Diamond’s classic “Sweet Caroline.”

Lynchburg outfielder Julian Escobedo (left) slides into home, avoiding the tag of Salem Red Sox catcher Jaxx Groshans to give the Hillcats a 1-0 lead in the first inning Tuesday night.