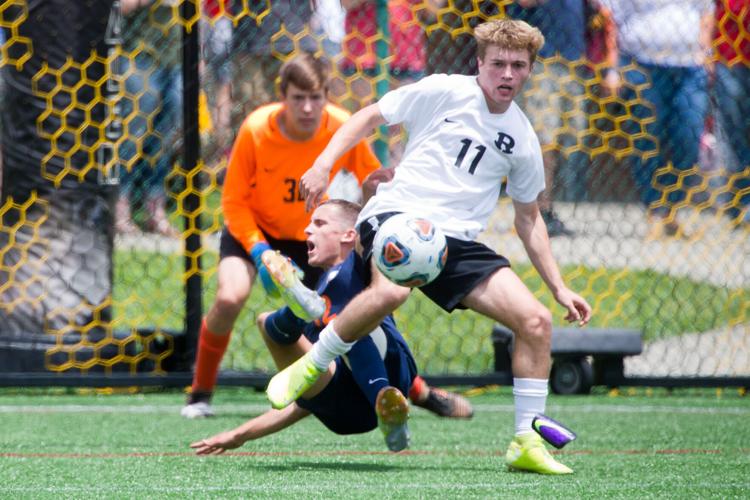 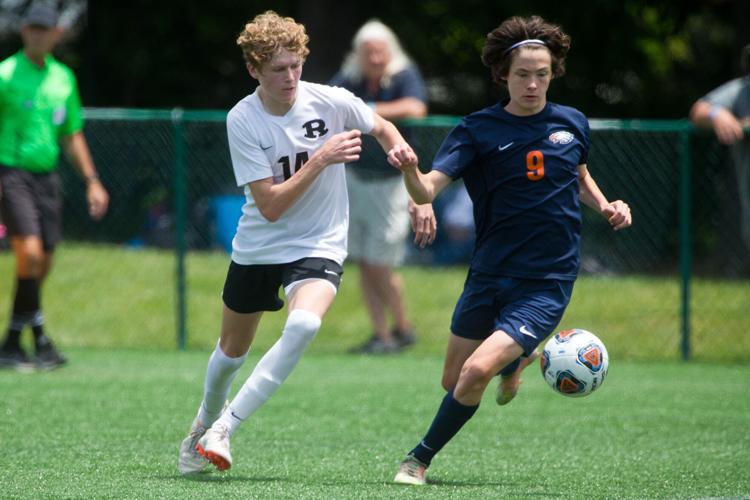 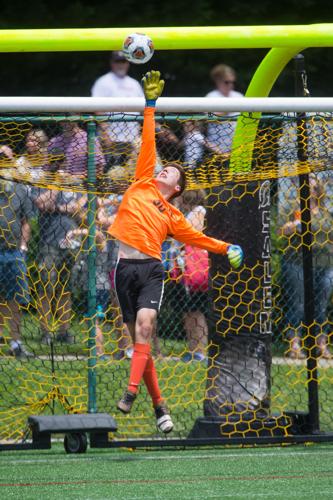 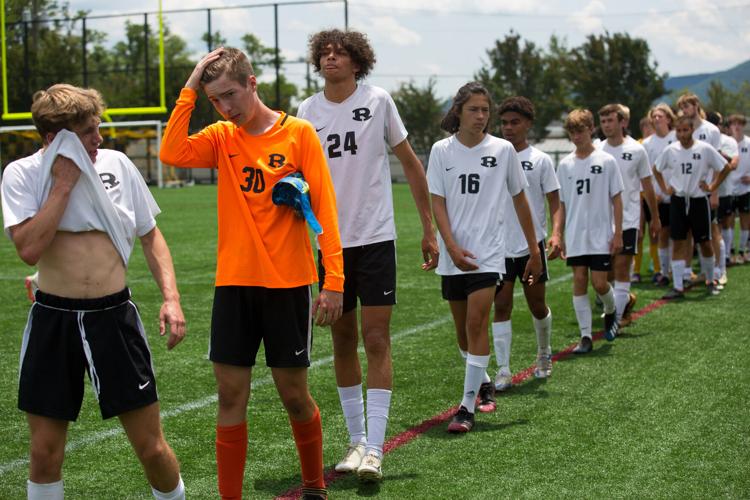 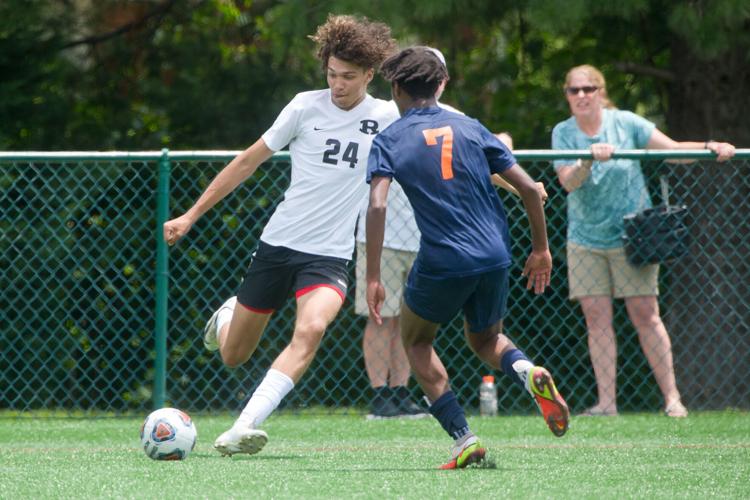 Radford’s Elijah Kelly kicks the ball away from Clarke County’s Menes Ajyeman in the second half Friday in Salem. Clarke County won 3-2.

He spun away from the goal and threw his hands up in disgust. Christopher LeBlanc had just rattled the woodwork on a potential go-ahead goal, and the Clarke County junior was determined not to let it happen again.

The opportunity for redemption came quickly.

Less than two minutes later, LeBlanc scored from a sharp angle for the decisive tally, giving the Eagles a 3-2 victory over Radford in the VHSL Class 2 boys soccer semifinals Friday at Spartan Field.

“It really just got my blood boiling,” LeBlanc said of hitting the right post from close range. “I know I could have finished another one, so I just kept my head up, kept the intensity high. I just kept on going until I could get another chance.”

He got it thanks to an aggressive approach by Radford (16-5-2) that left the back end vulnerable. Caleb Neiman sent a perfect through-ball to LeBlanc, who streaked down the right channel and got one-on-one with the keeper.

“I think they were getting a little greedy with their counterattack, trying to put a lot of people on offense,” LeBlanc said. “After I got to that ball, I knew I was in front of the whole defense. So either they foul me from behind, or I get a finish in. I just kept the pace and put it bottom-left with power.”

Radford coach Clark Ramsey praised the finish but also the technical quality that led to it. The Eagles scored their first goal in a similar fashion on a long pass from the midfield that Oakley Staples controlled and converted.

“We haven’t played a team that is as efficient through the middle, and that creates a swing,” Ramsey said. “We’ve trained a lot on the urgency and the assurance of clearance. We’ve worked a lot, too, with back-post responsibilities.

“But when you just have that many connections to the swing, it just creates a plus-one swing. It caught us three times, and they scored twice from those.”

Radford trailed 2-0 after Leo Morris scored on a nice cross from LeBlanc in the 22nd minute. But the Bobcats got one back six minutes later thanks to a brilliant free kick from Elijah Goff, who sent his curling left-footed strike from about 30 yards into the top-right corner of the net.

“Beautiful finish on the free kick,” LeBlanc said. “We couldn’t do anything about that except keep our heads up.”

Radford tied it in the 58th minute, as Elijah Kelly scored from the center of the box. Still, LeBlanc ensured the game wouldn’t stay level for long.

“I’m proud of them,” Ramsey said of his players. “Every senior, I’m proud of them for what they did. But for every player that’s coming back, I said that there were moments that we can learn from that we didn’t own, and we could have. Even during that last two minutes of play.”

Plus more golf, softball and baseball.

Phillips: Congressional hearing an opportunity for Goodell to distance himself from Snyder

There was never any chance that Washington Commanders owner Dan Snyder would appear before Congress.

Radford’s Elijah Kelly kicks the ball away from Clarke County’s Menes Ajyeman in the second half Friday in Salem. Clarke County won 3-2.