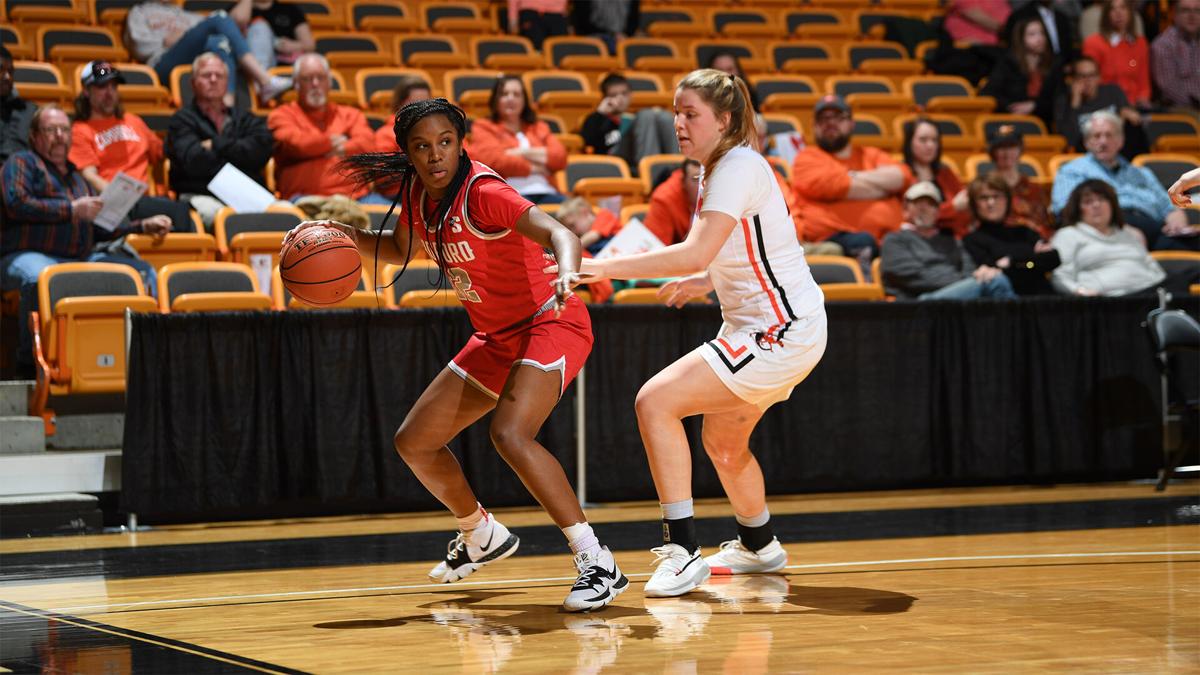 Bryonna McClean (left) and the rest of the Radford women’s basketball team will open the season Wednesday at North Carolina. Radford was picked second in the Big South poll. 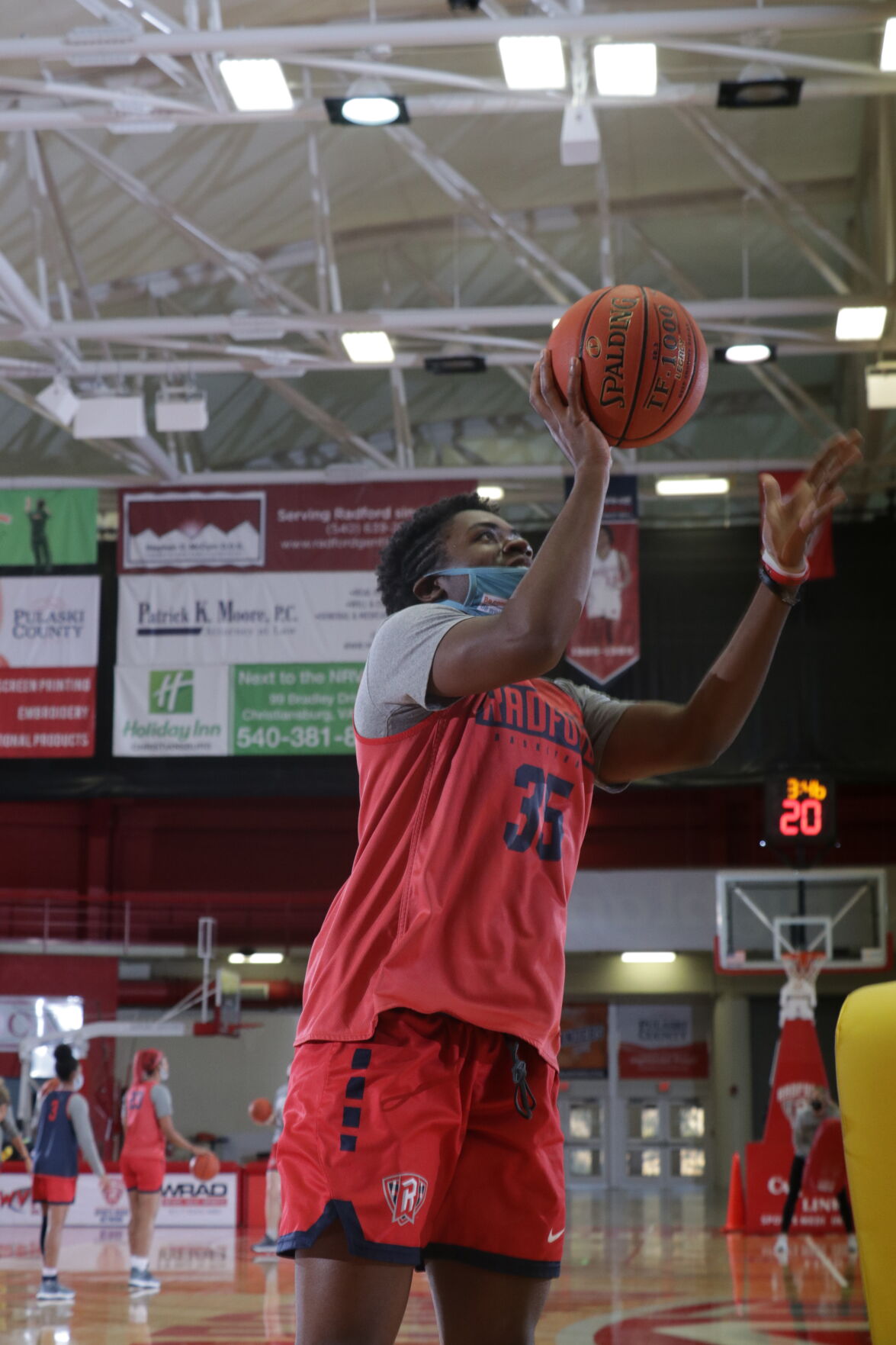 Radford’s Amele Ngwafang, who ranked third in the Big South in rebounding last season, has made the preseason All-Big South second team. 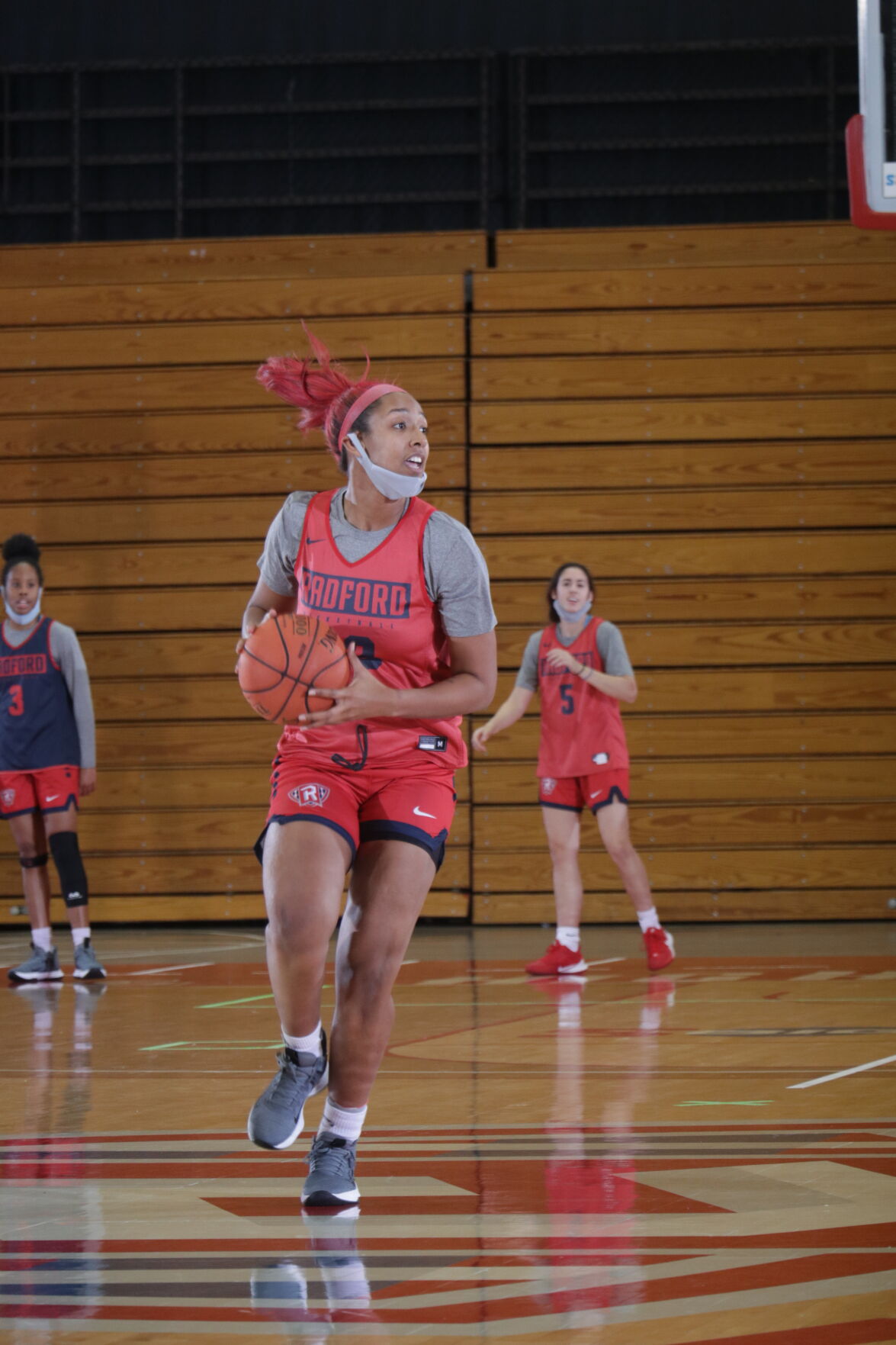 Aiden Rainford, who averaged 6.4 points last year, is one of two returning starters on the Radford women’s basketball team. 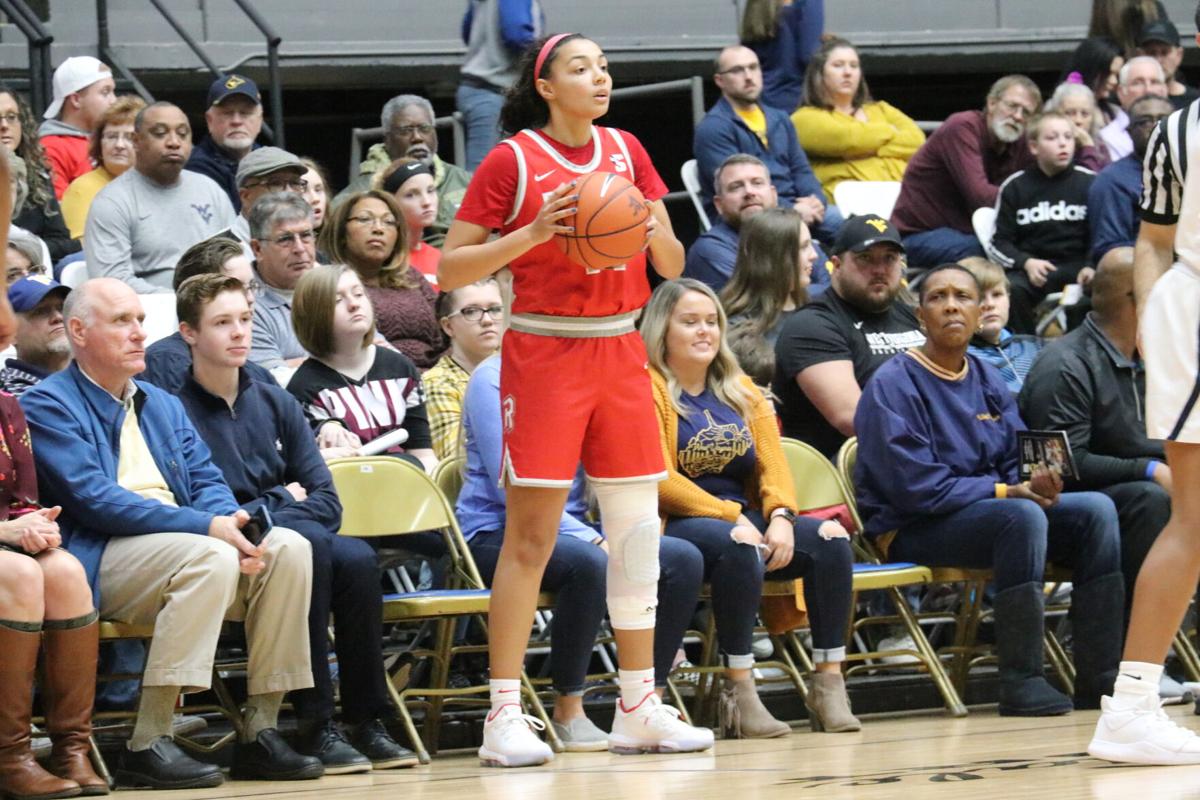 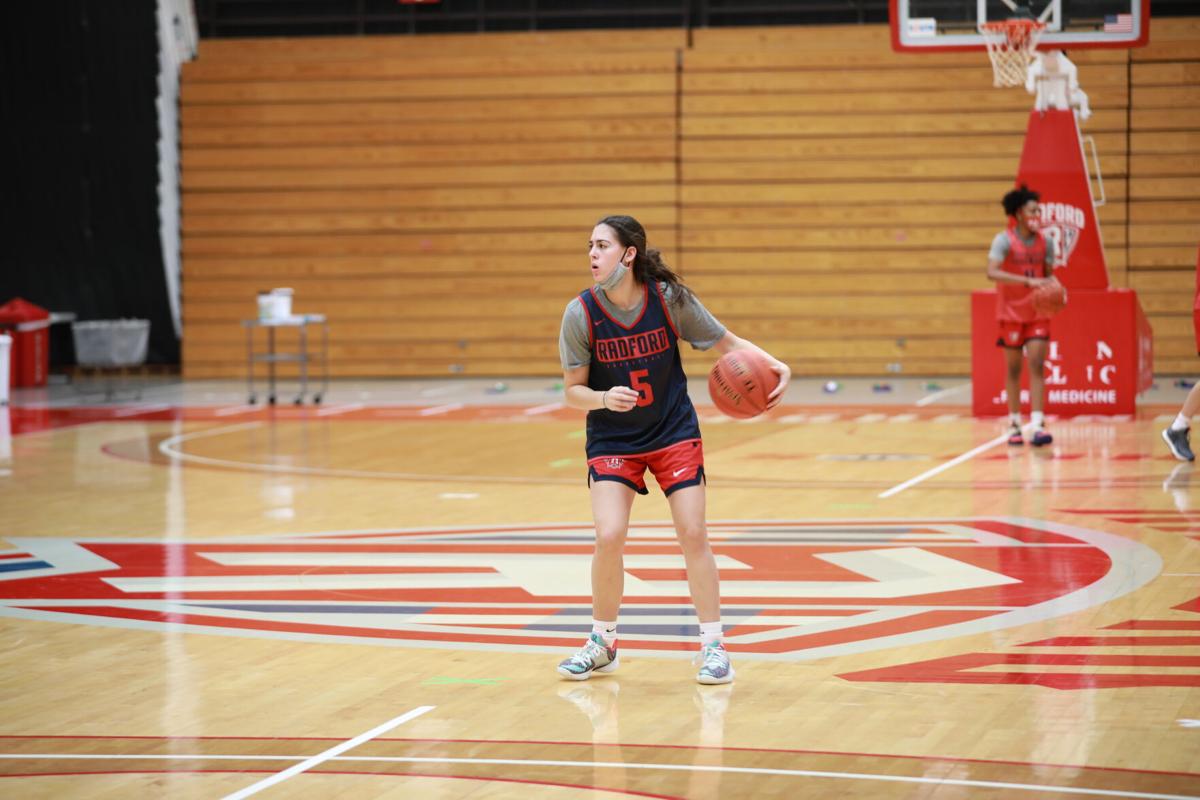 Danielle Montelbano, a freshman from Florida, will likely start at point guard for Radford.

The Radford women’s basketball team plans to attack defenses more from the perimeter than from the paint this year.

The Highlanders have hurt foes inside in recent seasons, thanks to frontcourt players such as Janayla White and Jada Worthy on the 2017 and 2018 WNIT teams and Lydia Rivers and Sydney Nunley on the 2019 NCAA tournament team.

Nunley was again a threat last season, when she made the All-Big South second team as a senior.

“This year’s team is different … because I think we have more guards … who are ready to contribute,” said McGuire, whose team opens the season Wednesday at North Carolina. “We’ll probably look a little bit more smaller on the court.

“We’re not going to be quite as dominant or as strong in the post as we’ve been. We’ve had Janayla White, Jayda Worthy, Lydia Rivers, Sydney Nunley. When push came to shove, we could just throw the ball inside and let them play one-on-one.

“This year’s team will become more perimeter-oriented. … We’ll play with more space — a little more four out, maybe some five out.”

Junior guard Makaila Wilson said the Highlanders are “trying to spread the floor and run a little bit more.”

But the schedule could have an impact on how much Radford runs up the court.

To cut down on travel during the coronavirus pandemic, the Big South has changed its scheduling format for league play.

Radford will play each of its league rivals on back-to-back days at one site, as opposed to playing two different schools over the course of a week.

McGuire’s squad will open Big South play with games at Longwood on Dec. 15-16.

“Playing back-to-back days, … teams are going to get tired,” McGuire said. “Teams who can run a halfcourt game are probably going to have a leg up.”

Radford must replace three starters from last year’s team, which went 17-12 overall for the program’s sixth straight winning season. The Highlanders finished second in the Big South with a 15-5 league mark.

But the Big South tournament, NCAAs and WNIT were canceled because of the pandemic.

“We really did have momentum at the end of the season, and I think we were all really excited to play the [league] tournament,” junior forward Aiden Rainford said. “It’s kind of fuel for this year.

“We didn’t get to finish off what we started.”

Campbell and Radford have been picked first and second, respectively, in the Big South’s preseason coaches poll.

The Highlanders will miss point guard Khiana Johnson, who made the All-Big South first team as a senior. She averaged 12 points and ranked fourth in the league in assists (4.4 apg).

The new floor general will likely be Danielle Montelbano, a freshman from Florida.

Radford will also miss Nunley, who averaged 10.8 points and 7.5 rebounds last year. Defensive-minded guard Jen Falconer is the third starter who must be replaced.

Amele Ngwafang will succeed Nunley in the paint. She averaged 8.5 points off the bench last year, when she ranked third in the league in rebounds (8.1 rpg).

Ngwafang, a junior, has made the preseason All-Big South second team.

“Amele’s going to make another big jump this year with production,” McGuire said.

McGuire is still mulling over the other three starting spots.

Wilson averaged 7.8 points and sank a team-high 58 3-pointers off the bench last year. She has been slowed by a knee injury in practice.

“Getting her healthy … is going to be very, very important because I think she’s a really good player,” McGuire said.

Radford tied for second in the Big South in scoring defense (58.0 ppg) last year, but McGuire said this year’s team is not yet as strong defensively as he would like.

“It’s just [about] learning to play with a level of effort and concentration defensively that you have to play at to be really, really good,” he said.

Radford ranked third in the Big South in rebounding margin last season, but Nunley is no longer at center.

“This team has to really buy into blocking out,” McGuire said. “If we play four-guard lineups maybe, we have to rebound as a unit.”

Five of last year’s top seven scorers are back, although a go-to scorer has not emerged in practice.

“We still have a lot of returners from last year that played a lot of good minutes,” Rainford said. “It might not be just one person [leading the team in] scoring every time. … I think it’s going to be pretty even across the board.”

"It stunk," Mike Young said of coaching in a game with few fans.

A Temple player has tested positive for COVID-19.

"You might not recognize us. We've done a 180," coach Kenny Brooks said.

"Do we have the opportunity to move up the ladder? I think without question," Mike Young said.

"I felt like it was Christmas morning," Tech coach Kenny Brooks said.

VMI basketball moves on without another standout

Greg Parham will succeed SoCon freshman of the year Travis Evee as the starting point guard.

Bryonna McClean (left) and the rest of the Radford women’s basketball team will open the season Wednesday at North Carolina. Radford was picked second in the Big South poll.

Radford’s Amele Ngwafang, who ranked third in the Big South in rebounding last season, has made the preseason All-Big South second team.

Aiden Rainford, who averaged 6.4 points last year, is one of two returning starters on the Radford women’s basketball team.

Danielle Montelbano, a freshman from Florida, will likely start at point guard for Radford.