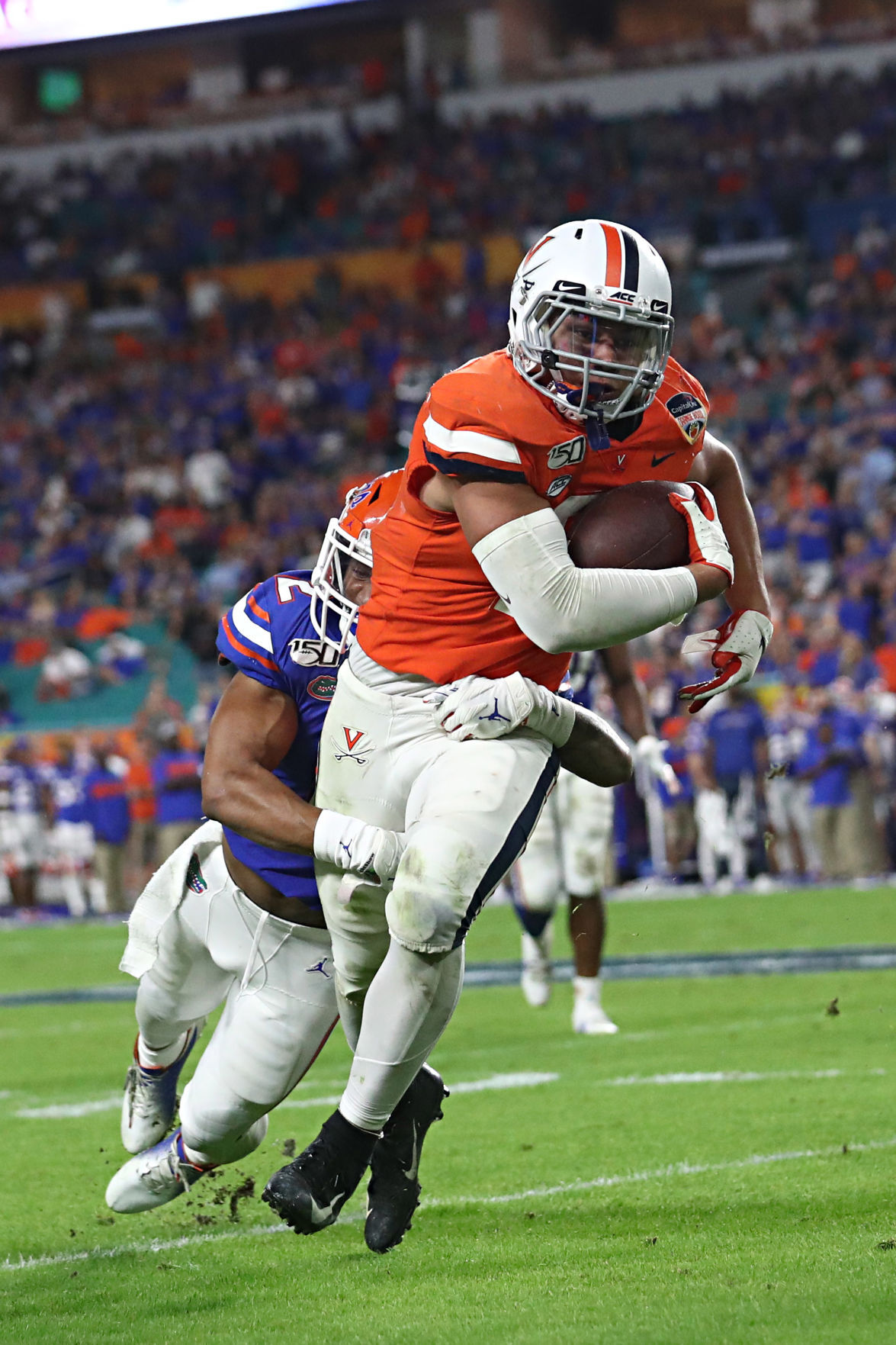 Virginia running back Wayne Taulapapa catches a pass during the Orange Bowl against Florida on Dec. 30 at Hard Rock Stadium. 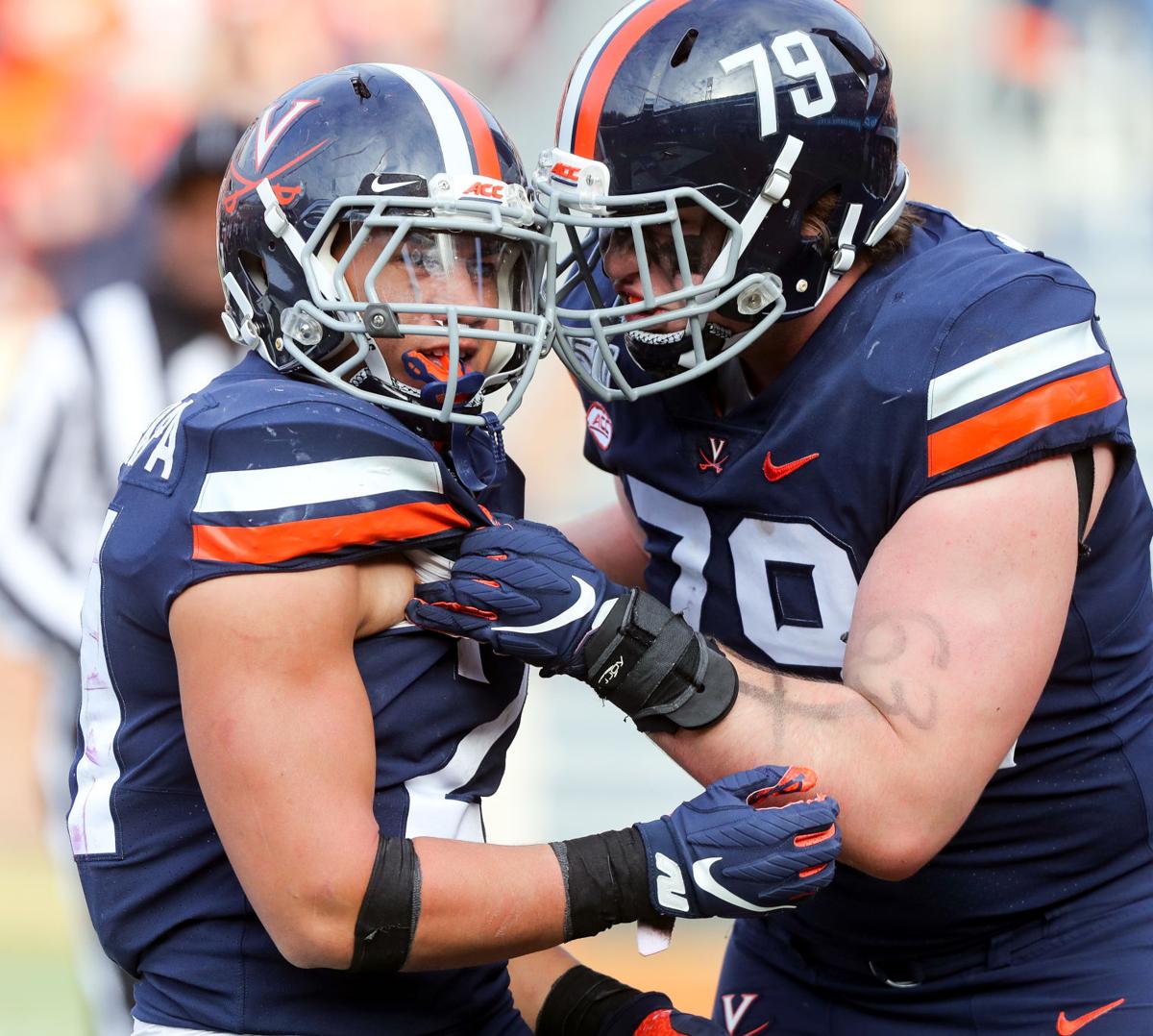 After witnessing the dual threat offered by quarterback Bryce Perkins over the past two seasons, Virginia football fans had to be pleased with successor Brennan Armstrong’s willingness to run the ball Saturday night in a 38-20 victory over Duke.

That didn’t take away from a workmanlike performance by junior running back Wayne Taulapapa, who carried 16 times for 95 yards and two touchdowns.

It was a career high for Taulapapa, whose previous high had come against Duke, when he rushed for 77 yards and two touchdowns in the Cavaliers’ 48-14 win last year.

“As an offensive player, no matter what position you play, you always want to be that guy that people look to,” Taulapapa said Tuesday in a lead-up to Virginia’s meeting with No. 1 ranked Clemson at 8 p.m. Saturday.

“As long as I’m doing my job, doing my part as everyone else is, that’s the best thing that you can do.”

In 2019, Taulapapa was UVa’s second-leading rusher behind quarterback Bryce Perkins, who had a team-leading 227 rushing attempts and rushed for 1,046 yards, not counting 277 yards in losses.

Taulapapa finished with 486 yards and clearly had the edge over two other running backs, PK Kier and Lamont Adkins, upperclassmen who left the team via the graduate transfer route.

Mike Hollins, a freshman in 2019, figured to be Taulapapa’s backup but “opted out,” apparently due to concerns over the coronavirus.

Ronnie Walker, a transfer from Indiana, has not been successful to date in an appeal to play this season.

Simpson had eight carries for 36 yards, including a 12-yarder, and caught two passes.

“Shane’s very talented,” Taulapapa said. “When we came off to the sideline, we talked to each other about what we’d seen.”

At 5 foot 9 and 214 pounds, Taulapapa is more suited for running between the tackles. Simpson, at 5-11 and 200 pounds, is more of an all-purpose threat who can also be a factor in the return game.

“Obviously, the player that produces will continue to work for us,” Taulapapa said. “It’s nice to have all three of us in the room.”

The third running back is sophomore Perris Jones, a 5-8, 175-pound walk-on who also returns kicks. Jones had two carries for 11 yards.

“We’ll continue to do that as long as we produce,” Taulapapa said.

Taulapapa is the most likely to carry the ball up the middle, given his strength training from running the beaches in his native Hawaii.

He originally committed to Brigham Young when Virginia coach Bronco Mendenhall headed that program and Taulapapa subsequently flipped to UVa but not before completing a Mormon mission.

Second in carries behind Taulapapa was the Cavaliers’ first-time starting quarterback, Brennan Armstrong, credited with 10 carries for 56 yards.

“Brennan’s a big guy and he’s not afraid to lower his shoulder,” Taulapapa said. “When we see that, it definitely brings confidence to the offensive line and the receivers who continue to block for him.”

The Rays have made it to the World Series in only the fourth season of Neander's reign.

UVa showed some signs of life on offense, but loses in a South Florida downpour Saturday night.

VMI to kick off football season in February

The Keydets will play an eight-game football season from February to April.

You know about the Hokies and Cavs, but here's a look at this week's other games involving ACC and state teams.

The linebacker/safety and his team will face UVa this week and Virginia Tech next week.

Virginia running back Wayne Taulapapa catches a pass during the Orange Bowl against Florida on Dec. 30 at Hard Rock Stadium.