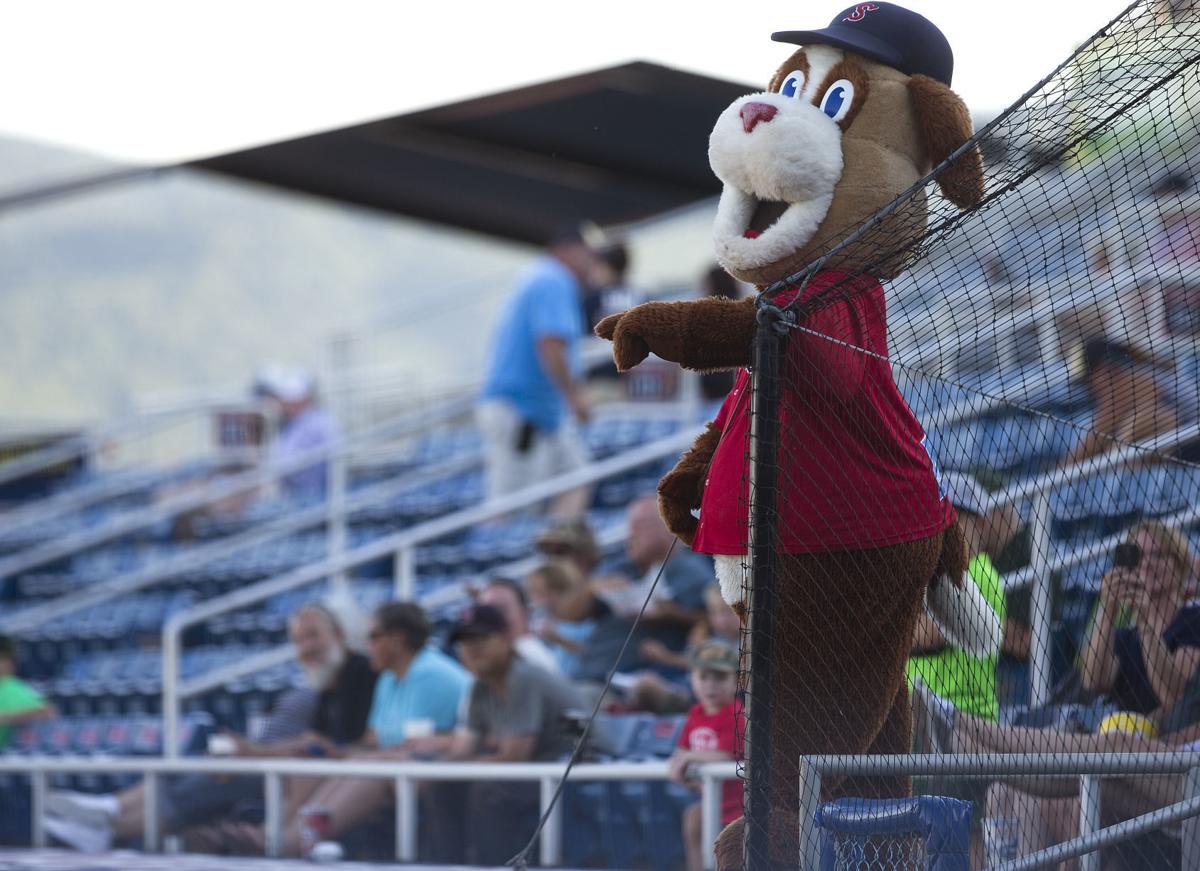 Mugsy, the Salem Red Sox mascot, did not have a baseball team to root on this summer. 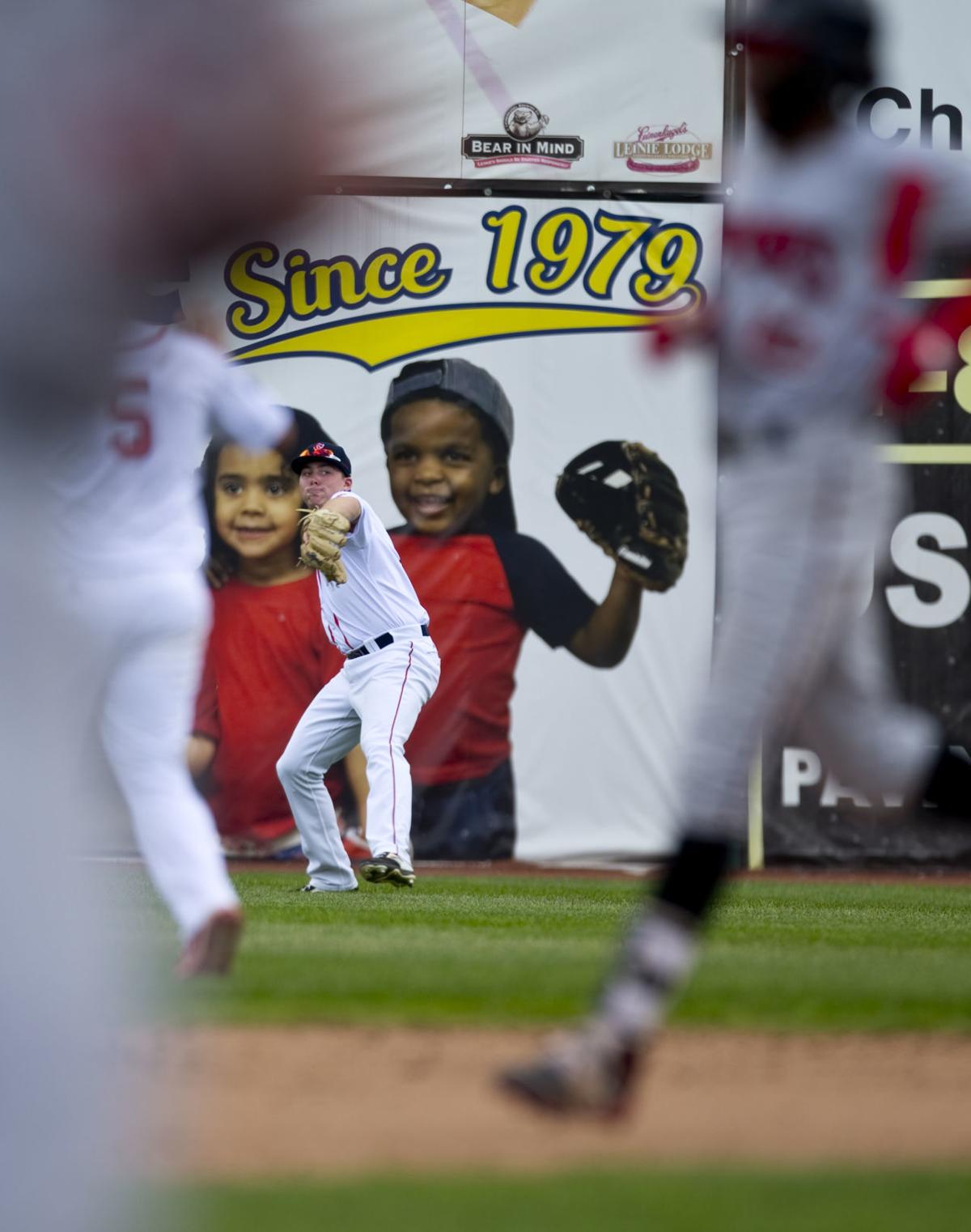 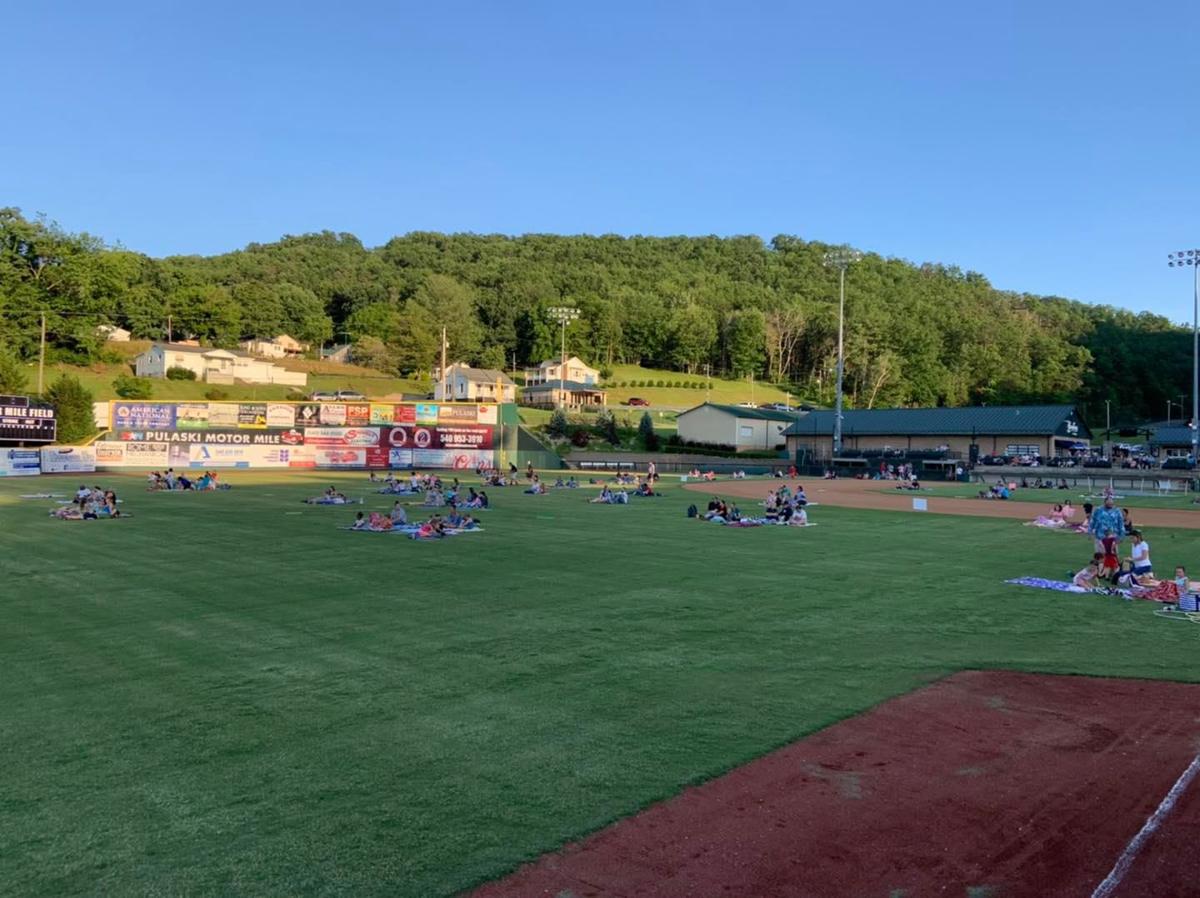 Movie fans spread out in the Calfee Park outfield for a viewing of the Disney movie “Frozen 2” last month. 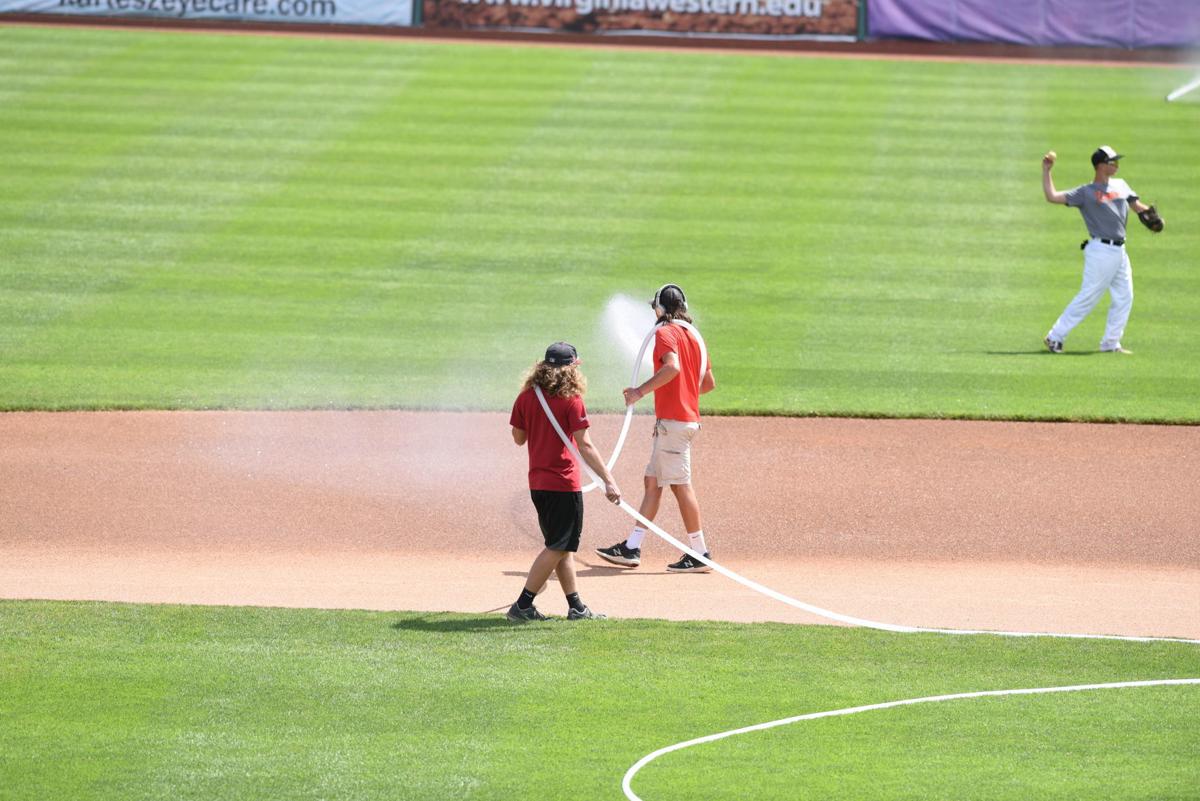 Crew members tend to the Salem Red Sox baseball field in between games at a USSAA youth baseball tournament held last month at the park. 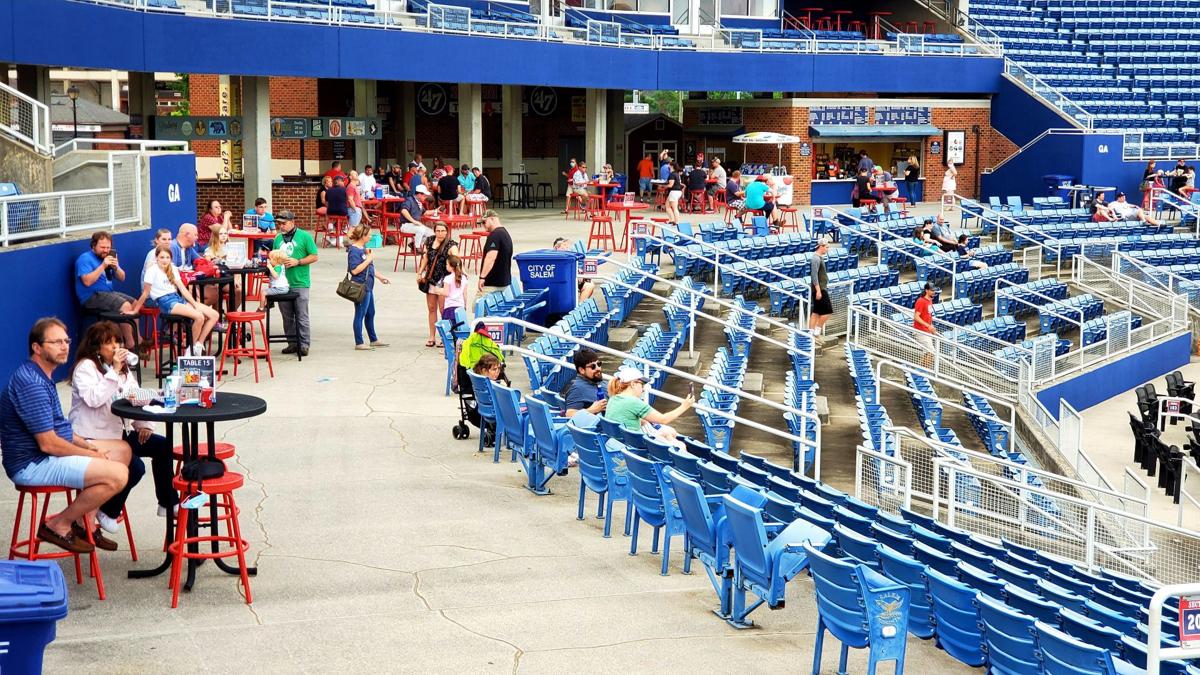 Music fans watch a live video feed from Fenway Park in Boston of the Dropkick Murphys benefit concert, which was held in May.

The announcement that minor league baseball teams have been anticipating — and dreading — finally came on Tuesday: There will be no games in 2020.

But that doesn’t mean the stadiums in Salem and Pulaski will be dark.

The general managers of the Salem Red Sox and Pulaski Yankees saw this possibility coming long ago. They’ve been planning and implementing alternate activities for months.

They’re determined to keep their facilities humming as community hubs throughout the summer.

“I don’t think there’s anybody that is grateful for what’s going on right now,” Salem GM Allen Lawrence said. “But I think what we’ve learned from this is there’s a lot of things that we’re doing this year that we can continue doing in future years.”

The Red Sox have been opening their gates each Thursday through Saturday for food and beverage service at the park since early spring. Beginning this week, they’ll be offering a slightly higher-class dining experience on the infield. They’re also screening a country music concert on Wednesday night.

This comes on the heels of an under-14 baseball tournament that the Sox hosted last weekend that drew roughly 500 spectators.

“It’s not a ton, but it’s certainly better than nothing,” said Lawrence, whose ballpark hosted an under-13 tournament two weeks ago and will be home to some “Salem After Five” events later in the summer. “We did have a few fans and a few season-ticket holders who came out to the ballpark that didn’t know anybody on any of the teams. They just came out and wanted to watch some baseball.”

Similar momentum is building in Pulaski, where about 350 people showed up last Friday night for a screening of the movie Frozen II. That was the first of 24 events the Yankees announced that will run through early October, ranging from concerts to youth tournaments.

The Yankees also announced on Monday the formation of an adult coed softball league that will run for six weeks at Calfee Park beginning July 20.

“We’ve been working on this since really March, I would say, around the same time that spring training got paused and the major league season got delayed,” Pulaski GM Betsy Haugh said. “We had all these gears that were turning, and were working on all these backup plans.

“But at the same time — I’ll be honest with you — back then, we didn’t really think that everything was going to affect us. We thought by June, we’d be OK. As it kept going and we realized we weren’t, we finally just pulled the trigger and said we need to start announcing some of these events, get them rolling, because we could be waiting forever if we don’t.”

Haugh is the only full-time front office employee of the Yankees, and their groundskeeper also remains employed. Lawrence said the Red Sox have been able to retain all their full-time staff members; the interns were let go in mid-April when it became obvious that COVID-19 would — at the very least — cause a lengthy delay to the season.

“It just didn’t make sense to be able to keep them,” Lawrence said of the interns. “But fortunately, we’ve been able to keep all of our full-time staff, which I’m extremely proud of that. We all feel very fortunate that we’re in that situation, because I know from talking to a lot of other teams throughout our league and throughout the industry that we are definitely in the minority when it comes to that.”

MLB’s proposed contraction plan after this season originally included 42 teams and would eliminate the Appalachian League. According to initial reports, Pulaski would survive but move to a different league, but that situation remains fluid.

So in addition to opening the concession stands for all the events at Calfee Park, the club is also opening the retail stand on those days to try to unload as much Pulaski Yankees merchandise as possible.

“We’re in a waiting pattern, like most everyone is, as far as 2021 and the contraction and all that,” Haugh said. “Obviously, those conversations have taken a back seat to everything going on right now with COVID and trying to get the major league season started.

“We’re optimistic that maybe once the major league season gets rolling, they’ll be able to refocus some of the conversation on the future for the minor leagues, and then hopefully soon after that, we’ll find out how we will be affected.”

The Boston Red Sox have committed to paying all their minor league players a $400 weekly stipend through the end of August. Meanwhile, Lawrence and his staff are keeping notes on these non-baseball events for possible implementation in 2021 and beyond.

“There’s no reason that we couldn’t open the ballpark for food service on a Thursday night for happy hour or something like that in future years,” he said. “We’re learning a lot of things that we’ll be able to sustain as we get back to playing baseball, so I guess that’s been the silver lining of it. Hopefully we can get a little creative in future years, too.”

“We actually had that discussion in a meeting with ownership this morning,” she said. “We said, ‘We’ve got the baseball side of this pretty much locked down. We know how to do that. But this is giving us an opportunity to learn much more about the special events side.’

“Next year, we can just marry the two together and have more events like this, now that we’re fine-tuning how to be able to do them. I don’t see why we can’t still host local youth tournaments, have more movie nights, have a softball league, all these things, even if there’s minor league — and hopefully there will be minor league baseball — in the backdrop, too.”

Dale Earnhardt Jr. and Jeff Burton have been impressed by Bubba Wallace.

The most important day in the history of the complex and contentious relationship between NASCAR and Indy wasn’t the day the stock-car boys arrived.

WASHINGTON — The Washington Redskins began a “thorough review” of their name Friday, a significant step toward moving on from what experts and…

The most important day in the history of the complex and contentious relationship between NASCAR and Indy wasn’t the day the stock-car boys arrived.

Mugsy, the Salem Red Sox mascot, did not have a baseball team to root on this summer.

Movie fans spread out in the Calfee Park outfield for a viewing of the Disney movie “Frozen 2” last month.

Crew members tend to the Salem Red Sox baseball field in between games at a USSAA youth baseball tournament held last month at the park.

Music fans watch a live video feed from Fenway Park in Boston of the Dropkick Murphys benefit concert, which was held in May.