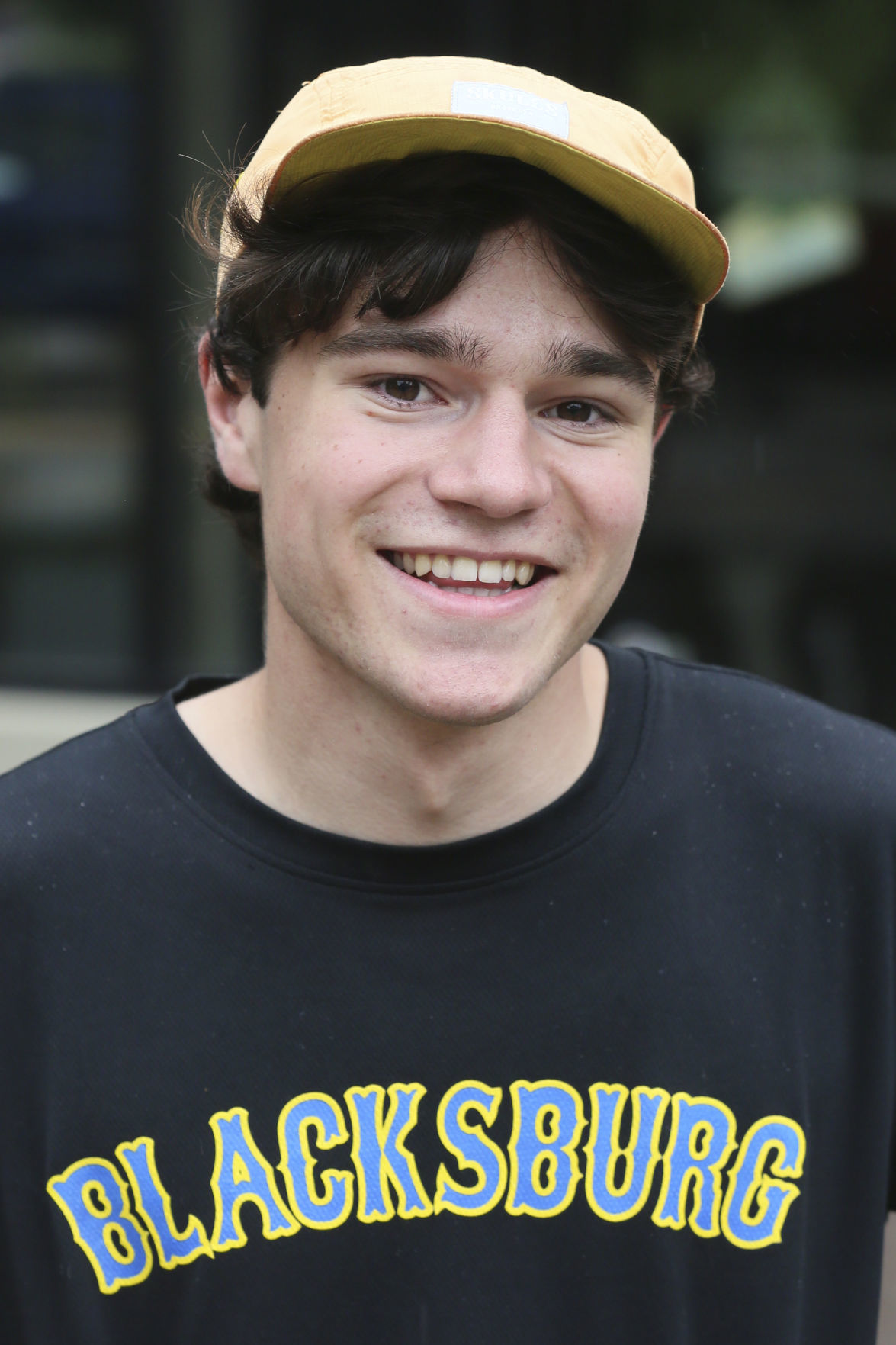 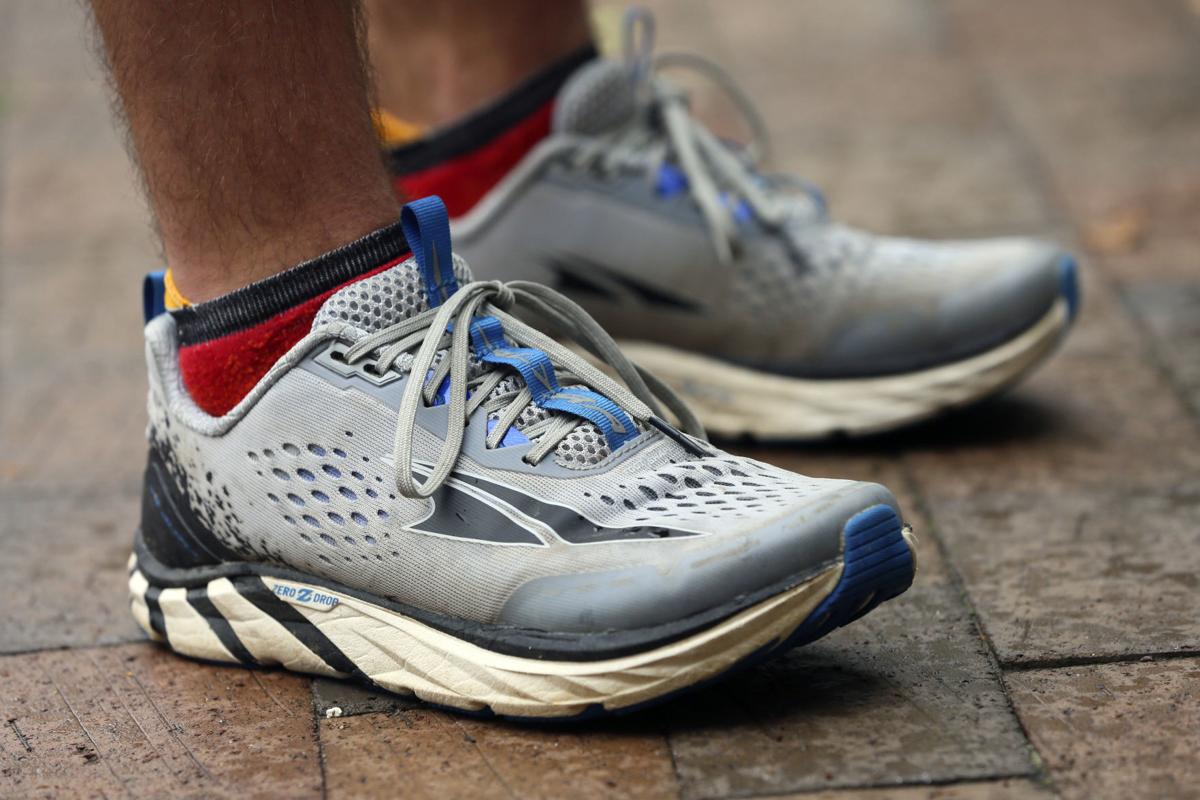 Ty Stephenson used several pairs of Altra running shoes that he got from the local running store RunAbout Sports for his town journey. 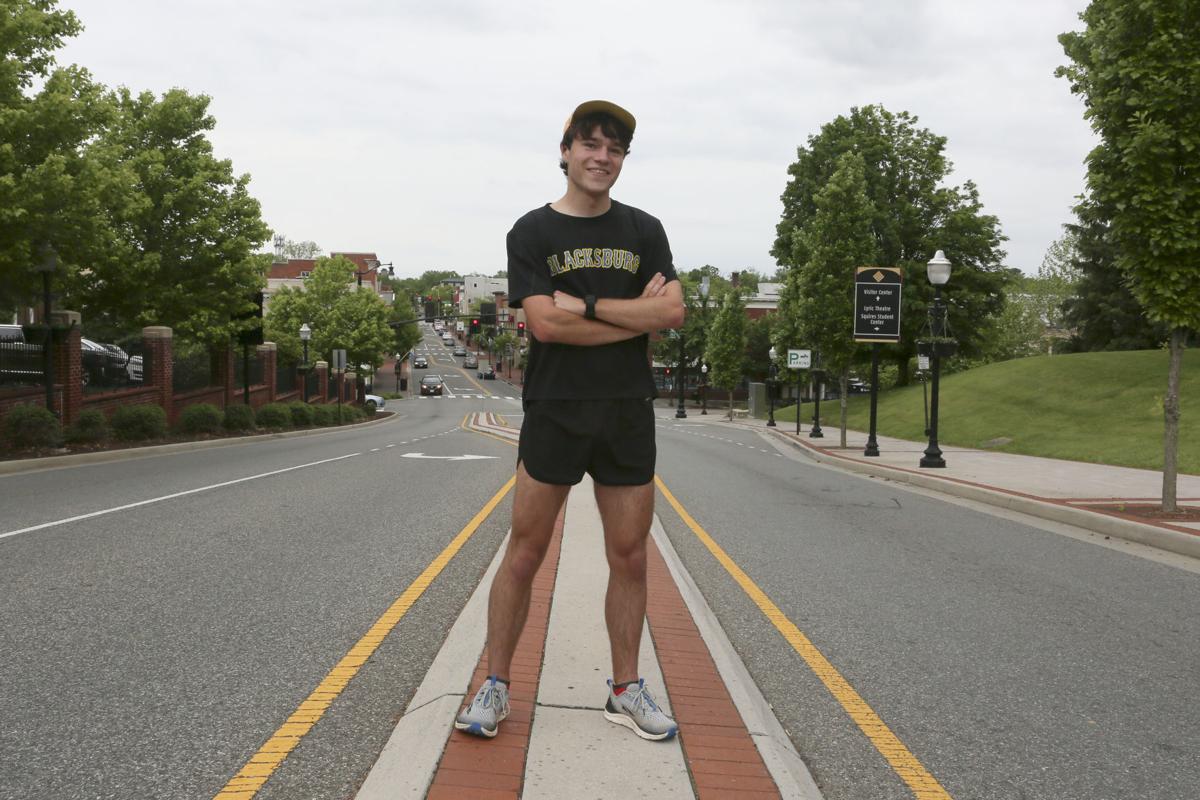 Ty Stephenson, 19, stands on Main Street in downtown Blacksburg. Over the past 10 months, the Blacksburg native and Virginia Tech rising junior has run every street in Blacksburg. 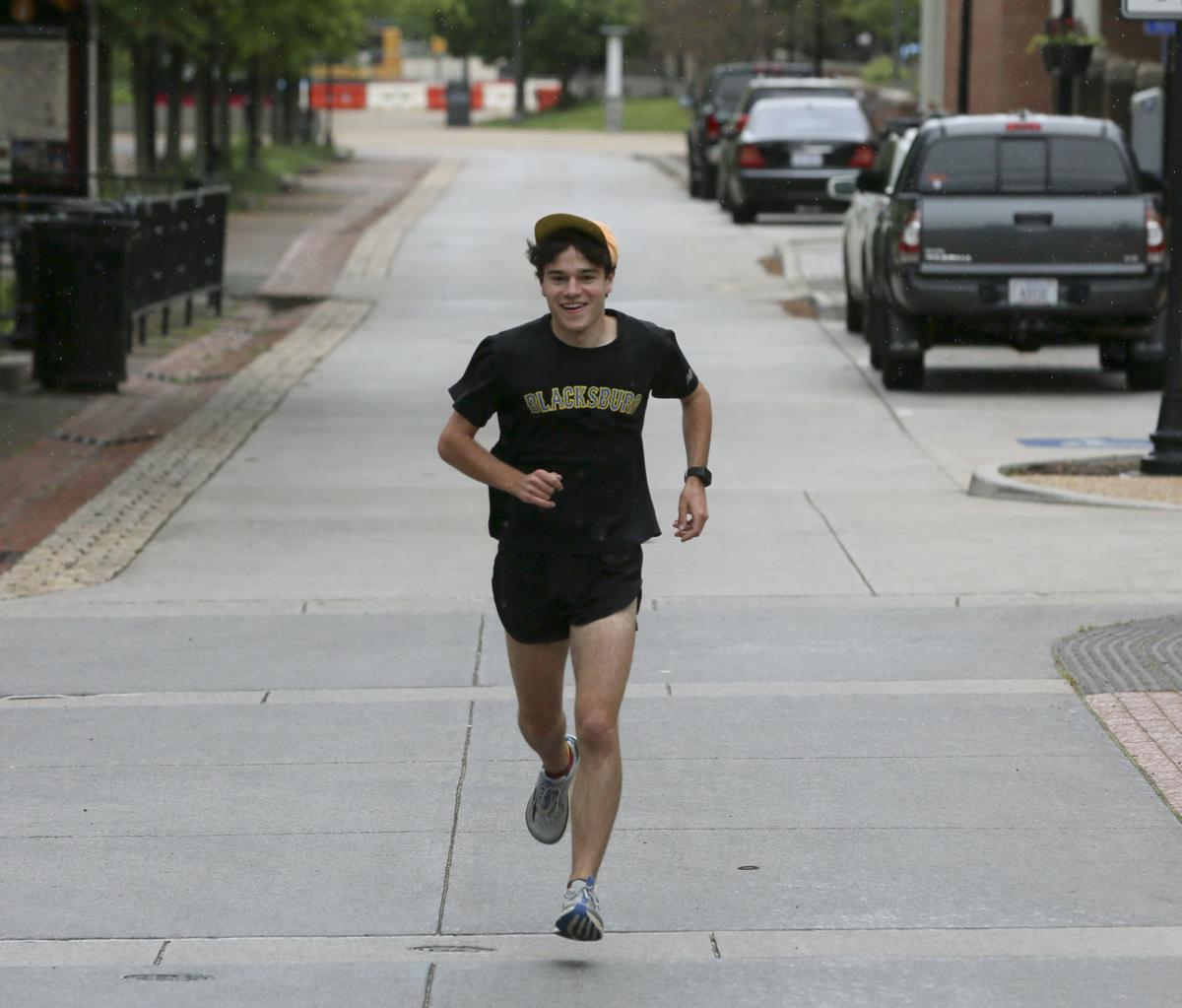 Ty Stephenson, 19, runs on College Avenue, a one-way street in downtown Blacksburg. Over the past 10 months, the Blacksburg native and Virginia Tech rising junior has run every street in Blacksburg.

Ty Stephenson thought he knew his hometown. Something inside him, though, told him that he didn’t. Not well enough.

So it was in that spirit that he walked into the Blacksburg town planning office last July and asked if he could purchase a map. The employee that day was kind. He not only gave Ty a free map, but it was a magnificent one — 3 feet by 3 feet, featuring every public street within the Blacksburg municipal limits.

Ty had decided to run them all.

Why? Well, a bit of inspiration came from a feature story Ty had read in Outside magazine on ultrarunner Rickey Gates. After jogging across the entire country in 2017, Gates ran every public street in San Francisco.

But most of it was personal. A Blacksburg native, Ty always has loved exploration and outdoor recreation. He spent much of his childhood trapping minnows and catching crawdads at Stroubles Creek and Toms Creek. He became a cross country runner at Blacksburg High School, then joined a running club in college. He’d done plenty of runs at Pandapas Pond, on the Appalachian Trail and on streets around Virginia Tech’s campus and his home.

But as he was about to enter his sophomore year at Tech last summer, having transferred back home after a year at the University of Mary Washington, he realized something.

“My eyes were opened to how my time was limited,” said Ty, who will turn 20 next month. “I didn’t have a ton of time left in Blacksburg, and I really love the area. I didn’t want to leave not feeling like I had fully explored it and really knew it or knew what I was talking about when I say that I’m from Blacksburg.

“So I just decided to make the commitment to run every single street within the town limits and see everything that there is to see — at least from the streets — in Blacksburg.”

To those who know him, this was just typical Ty.

“Ty has a very adventurous personality,” said Simonne Guenette, a close friend and former BHS cross country teammate. “He likes to create new and fun activities to keep him busy, and I think this was a great example of that. He’s always looking for something to do.

“I think we were all curious to see how long it would take, because obviously, there are a lot of roads.”

Four hundred ninety-two, to be exact. But Ty was in no hurry. He doesn’t consider himself a particularly fast runner, nor is he an ultracompetitive person.

He started in late summer of 2019 running the streets near his parents’ home on Northview Drive. Once school started, he began attacking the streets around his college apartment off Airport Road.

After every run, which he logged on an app, Ty would pull out a yellow highlighter. He’d trace the street on his giant map and mark it off the list at the bottom.

“If someone sees it in my house, it’s probably a little sketchy,” he said of the map, laughing. “They don’t know what’s going on, like I’m just plotting out things.”

What he was actually doing, though, was finding them.

Once averse to running the hills in his hometown, Ty suddenly was required to climb them all. He remembers happening upon The Meadow at Nellies Cave Park and marveling at the seclusion. He was rapt by the view from Highland Circle, which has a trail at the base that leads to the Hokie Stone quarry.

“There are so many beautiful views in Blacksburg,” Ty said. “It almost feels like a bowl, with the Drillfield being the bottom of the bowl. Every time you go up a hill, you have a really pretty view of the town and the mountains surrounding it. There’s just little parks and trails and stuff that I’d heard about but had never found, and they just popped up. So that was cool.”

He ran in all types of weather, often with friends. During the school year, he typically ran at night. Whenever he felt his motivation wane a bit, the unfinished map was there to remind him to get back out there.

Finally, on May 17, Ty traversed his final streets. He drove out near Warm Hearth Village and ran 7 miles on a route that ended on Royal Lane.

“Every house on that road looks like a big house you’d see in some old sea town,” Ty said. “It had weird fencing and shutters, and they’re painted kind of pastel colors. I felt like each little neighborhood — even each street — had its own little personality. I just feel like there’s so much to explore. This is just a few miles from my house, and I’d never seen the road.”

In all, Ty’s quest featured 60 runs totaling 314 miles. He admits the mileage is a tad inflated, as he often hit dead ends and had to backtrack. No-trespassing signs sometimes would divert him, as well.

He’s glad he did it, and he would recommend something similar to anyone looking for a low-cost adventure.

“There are just so many new places that we have right around our home that we never know about unless we go out of the way to seek them out, I guess,” he said. “We always think of our vacation time or our trips as times that we have to explore, and that’s how I used to think of it, too. But really, any time you can, go explore a new place.”

“Every run I went on, I had something cool or exciting or a new thing that I learned about Blacksburg, a new place that I could show other people or a new story to tell. I just think life’s too short to wait for those places that are exotic or something when we have so many cool places so close to us.”

Ty Stephenson used several pairs of Altra running shoes that he got from the local running store RunAbout Sports for his town journey.

Ty Stephenson, 19, stands on Main Street in downtown Blacksburg. Over the past 10 months, the Blacksburg native and Virginia Tech rising junior has run every street in Blacksburg.

Ty Stephenson, 19, runs on College Avenue, a one-way street in downtown Blacksburg. Over the past 10 months, the Blacksburg native and Virginia Tech rising junior has run every street in Blacksburg.