Washington quarterback Taylor Heinicke (left) is chased and sacked by Eagles linebacker Genard Avery during the second half Sunday. 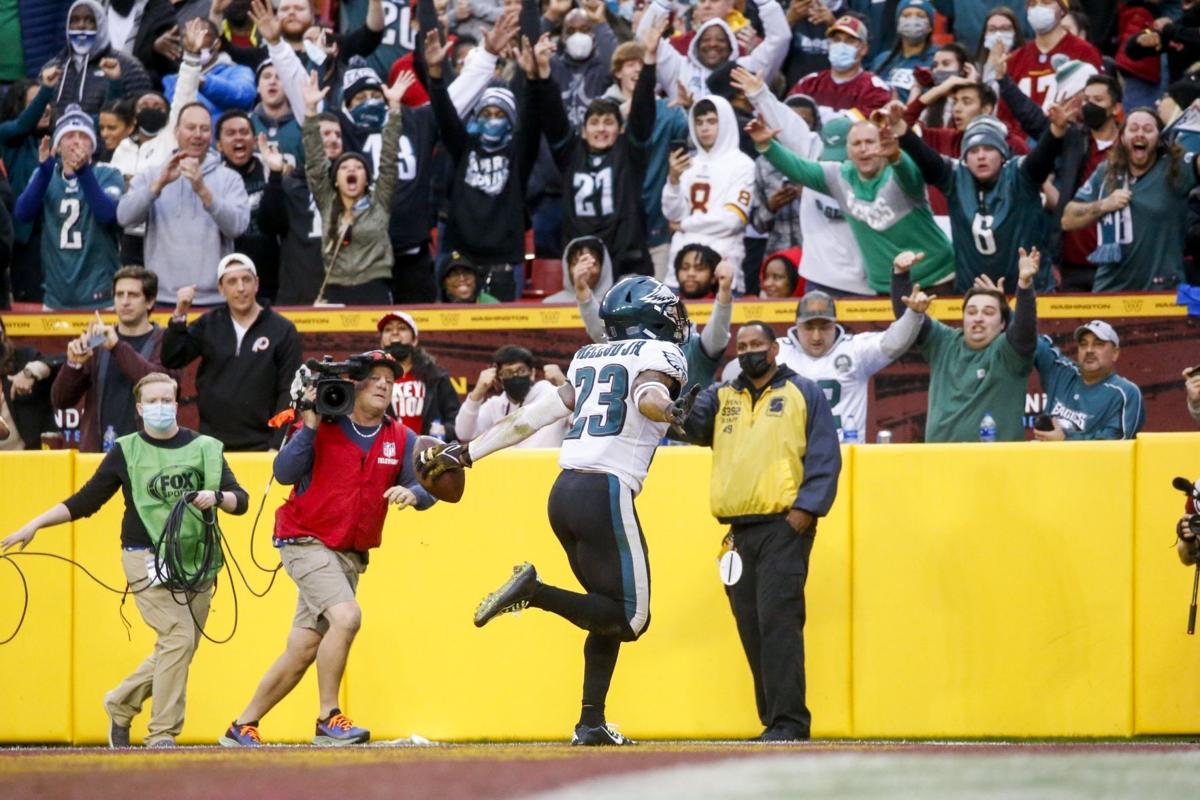 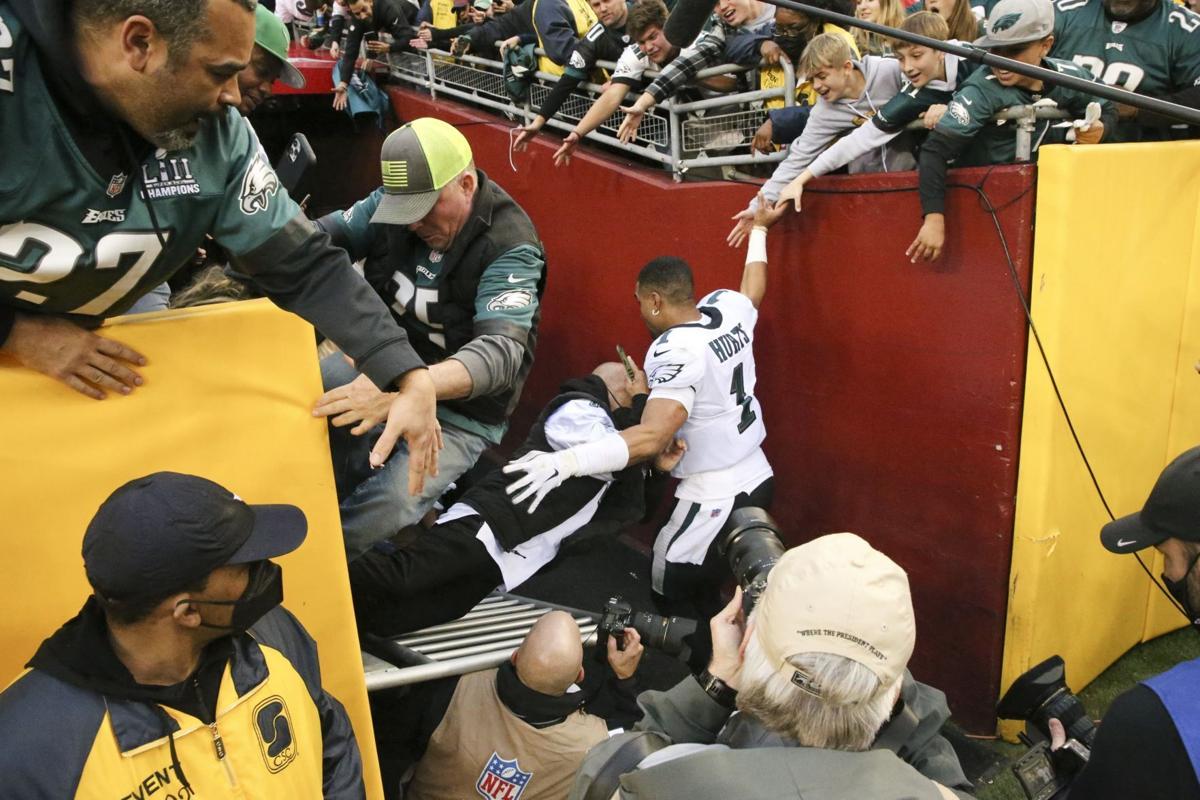 The Football Team era has ended at FedEx Field.

Washington will unveil a new name and logo in the coming months, but attempts to send fans out on a positive note were unsuccessful on Sunday, as the team lost 20-16 to the Philadelphia Eagles.

The Football Team was foiled by a UVa tandem in the Philadelphia secondary that logged the game-ending interception with 24 seconds remaining.

Anthony Harris ran with Washington tight end John Bates. A throw from Taylor Heinicke appeared to be a touch high, and Bates tripped as Harris reached in to deflect the pass.

It sailed over their heads into the diving arms of Rodney McLeod, who came down with the football, and the victory.

“Honestly my guy Anthony had great coverage, and I was able to capitalize on that,” McLeod said.

McLeod was voted a team captain this preseason despite missing the entire offseason with an ACL tear. He’s now rounding into form at a key moment for Philadelphia, which at 9-7 is either one win, or some other losses, away from a playoff berth.

On the Washington sideline, coach Ron Rivera was angry that the play wasn’t ruled a penalty. He said he felt Harris tripped up Bates.

“I thought the guy undercut him a little too early,” Rivera said.

Rivera complimented Heinicke as having played a “solid, sound” game. The quarterback finished 27 of 36 for 247 yards, with no touchdowns and one interception.

At times he showed the grit and resolve that has made fans love his underdog story, extending plays and keeping drives alive, but at key moments, including a fourth-and-5 at midfield in the second half where he threw short of the sticks, he showed why Washington will likely be in the market for a quarterback as soon as the season ends.

Heinicke and the offense came out blazing early.

Washington sprinted to a 10-0 lead, then a 16-7 halftime margin, but in the second half the offense sputtered to a stop, and the Eagles were able to grind out just enough offense to claim the victory.

“The guys played hard and they gave themselves a chance at the end,” Rivera said. “That’s all you can ask for.”

Both of Philadelphia’s touchdowns came on fourth-and-goal conversions.

Washington (6-10) is officially eliminated from playoff contention, though the team’s hopes were already slim entering the game, and Washington was without running back Antonio Gibson because of COVID.

The Football Team also lost tight end Ricky Seals-Jones to a scary neck injury. He collided with a cameraman on the sideline, then fell and hit his head on the solid portion of the sideline, behind the grass.

Rivera said the decision to cart Seals-Jones off was “precautionary,” and that he was walking around in the locker room at halftime, and the early prognosis is that he will be OK.

Washington running back Wendell Smallwood gave the day its lasting visual, when he was hit and the numbers flew off his helmet. Smallwood was one of the replacement players signed by the team after its COVID difficulties.

Those helmets will soon look different anyway, as Washington has one more game, in New York, next week before beginning the offseason, and adopting a new name and logo.

Plumbing leaks, malfunctioning smoke machines and now a faulty railing. It’s been a long season at Washington’s FedEx Field, which is only 25 years old.

After Washington’s loss to Philadelphia in Sunday’s home finale, Eagles quarterback Jalen Hurts was leaving the field when a group of fans lunging to high-five him caused a railing to give way.

The fans fell about 6 feet to the field. Most popped up immediately — one Associated Press worker was injured in the collapse; his condition was not immediately available.

Hurts had not yet reached the tunnel, so he was not hit. He greeted the fans, then was escorted to the locker room by security.

“I’m just happy everybody’s safe from it,” the quarterback said. “It’s crazy. it’s crazy stuff right there. That was a real dangerous situation. I’m just so happy everybody bounced back from it — it seemed like it. Passionate Eagles fans. I love it.”

The team released the following statement: “The Washington Football Team is aware of an incident in the North Field Tunnel following today’s game. To our knowledge, everyone involved was offered on-site medical evaluation and left the stadium of their own accord. We’re very glad no one appears to have been seriously injured. The safety of our fans and guests is of the utmost importance and we are looking into what occurred.”

The collapse happened in an area that is supposed to be reserved for ADA compliance. It was not immediately clear why so many Eagles fans were allowed in the area.

Washington has been open about its desire to build a new stadium to replace FedEx Field when the lease ends in 2027, but team president Jason Wright has also said the team will work to improve the fan experience at FedEx, and the team has added art installations and renovated a large swath of seats, as well as improving the club-level experience.

There have been a number of setbacks this year, though. A water pipe burst, drenching fans. A fire sprinkler went off in a suite, creating a similar situation. And the smoke machine the team brought in to introduce the players produced too much smoke at the beginning of the year, blinding the players as they attempted to run onto the field.

She finished the race in 2:19.12, 24 seconds faster than the previous record set by Deena Kastor at the 2006 London Marathon.

Washington quarterback Taylor Heinicke (left) is chased and sacked by Eagles linebacker Genard Avery during the second half Sunday.