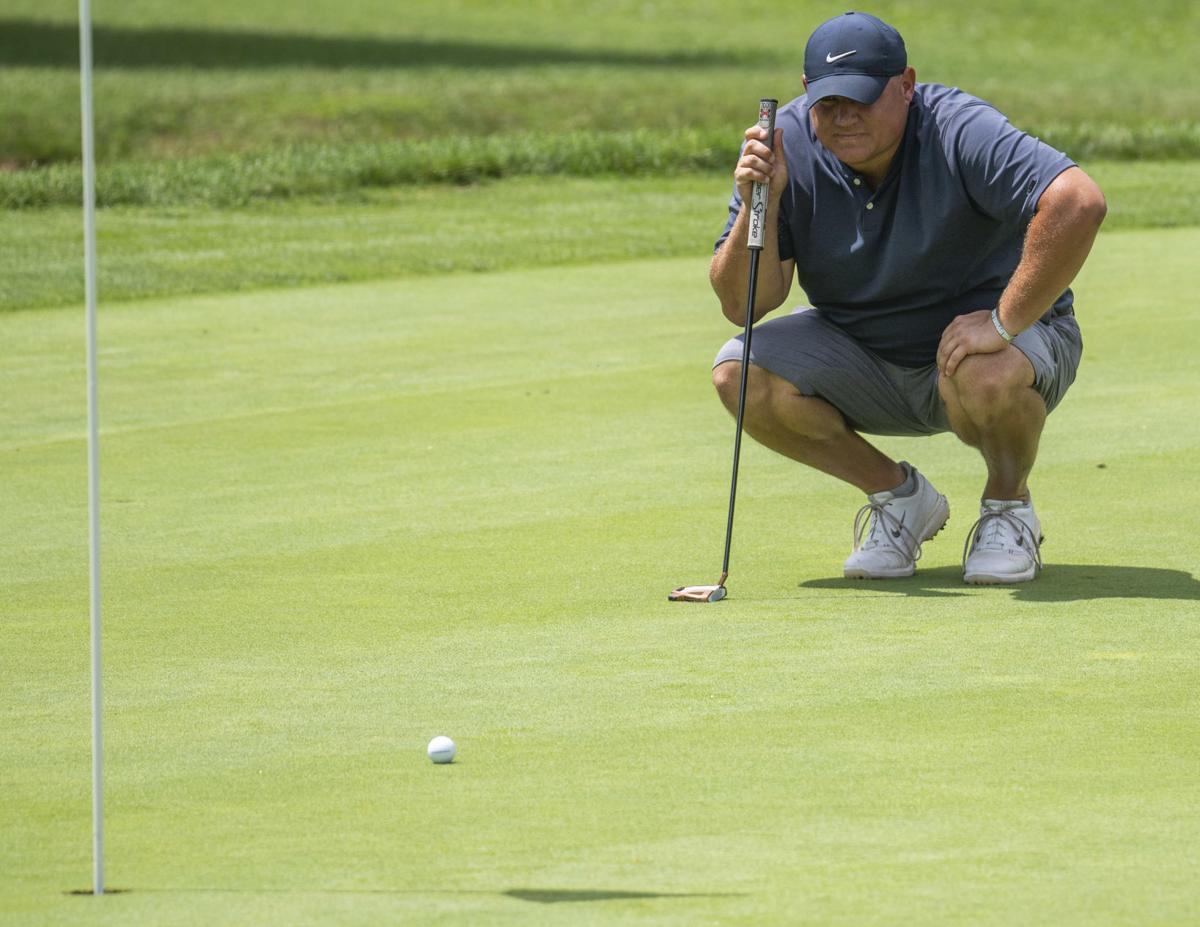 Chase Bailey lines up a putt during qualifying at the Roanoke Valley Match Play Golf Championship at Blue Hills Golf Club on Friday. 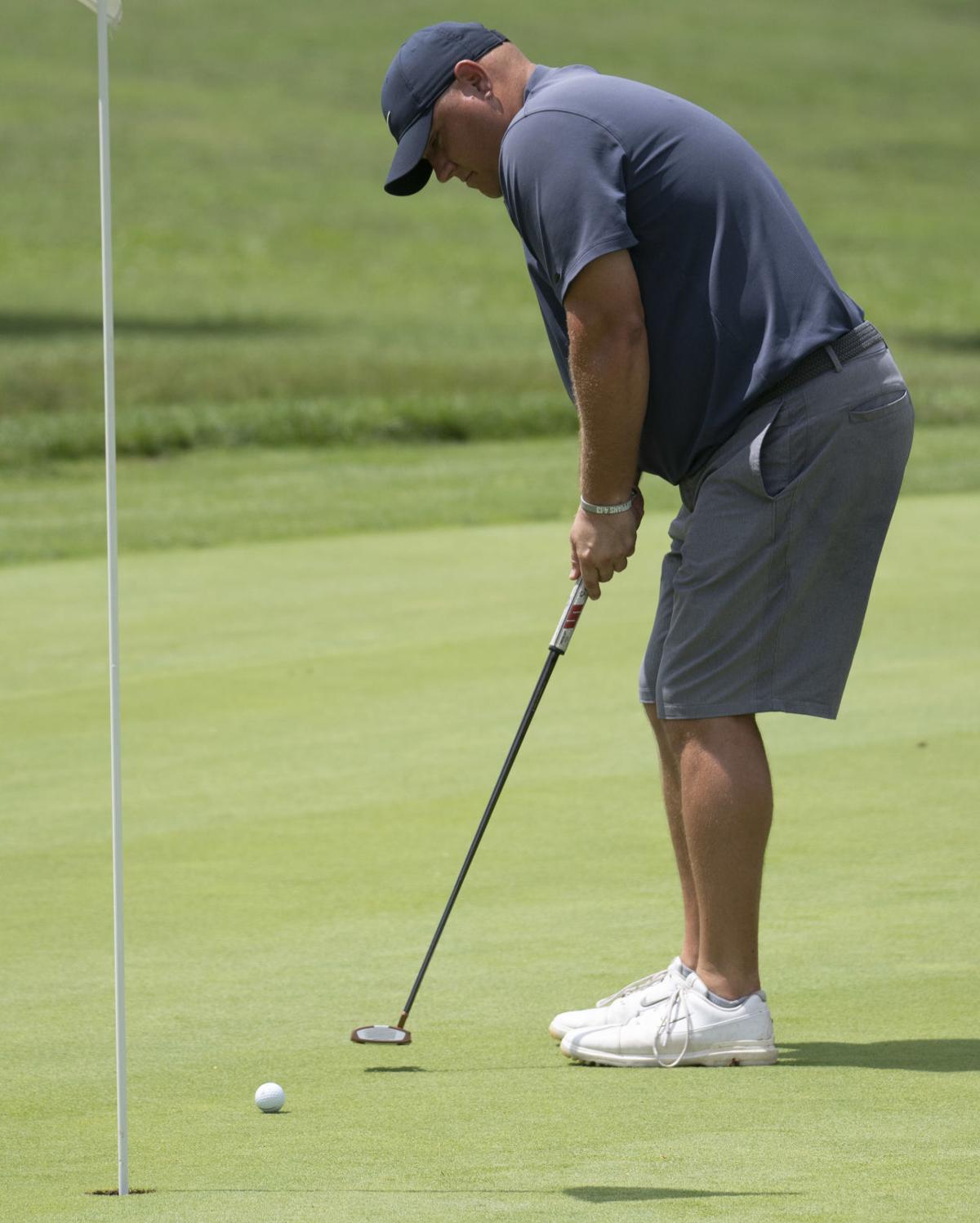 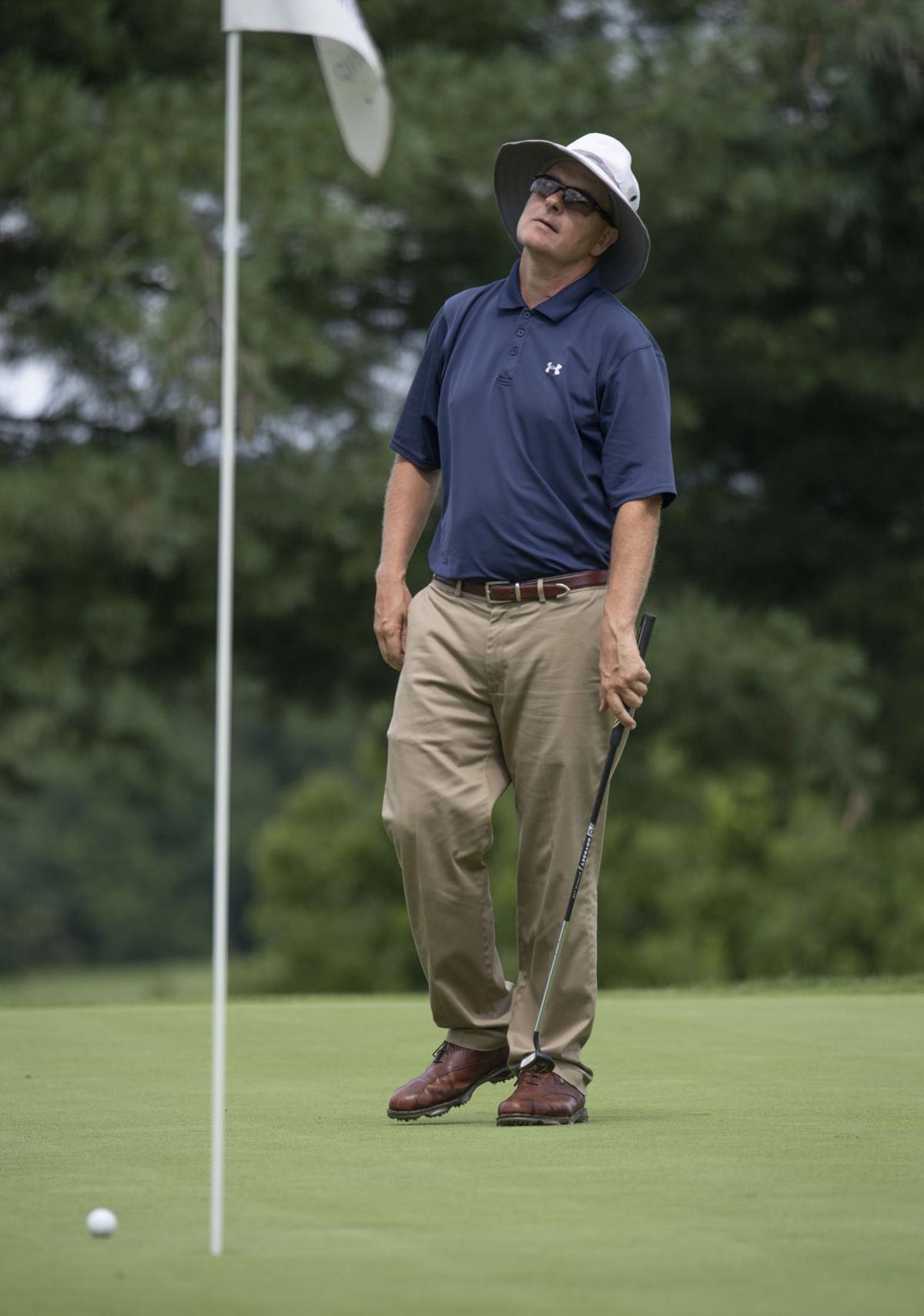 Darrell Craft reacts after missing a putt at the Roanoke Valley Match Play Golf Championship at the Blue Hills Golf Club on Friday. 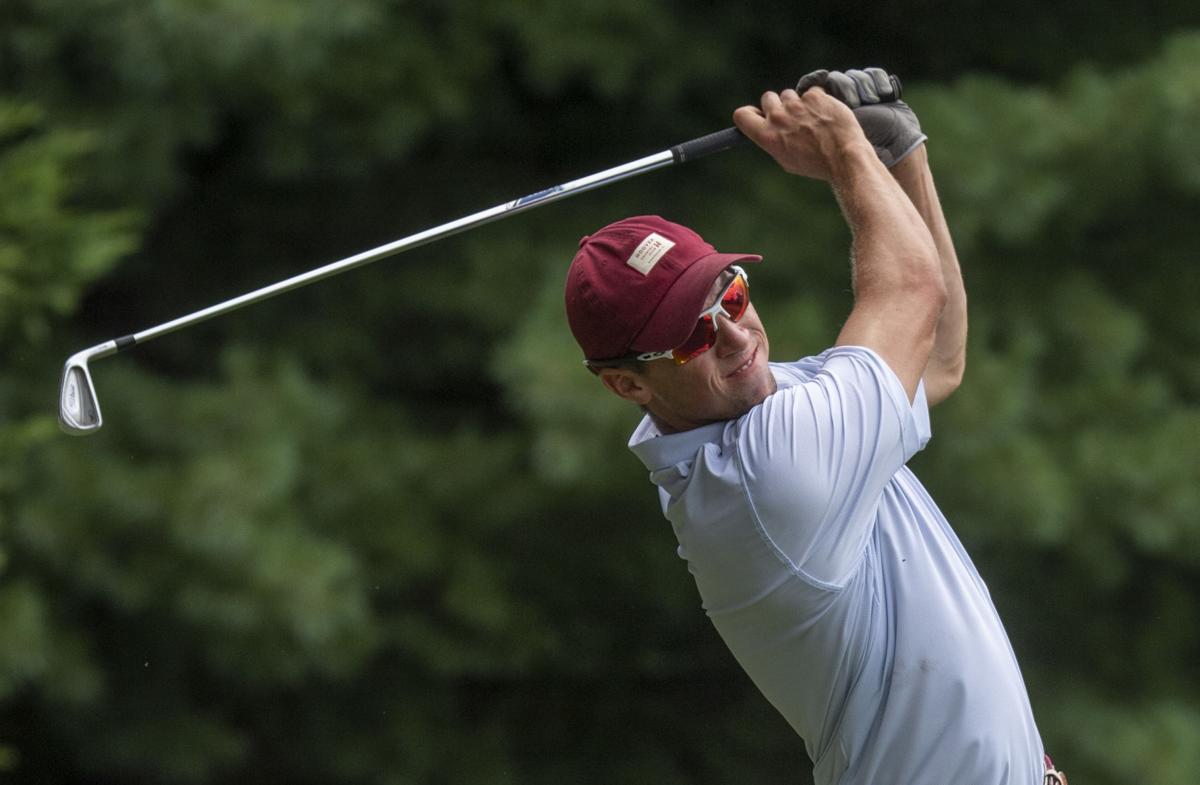 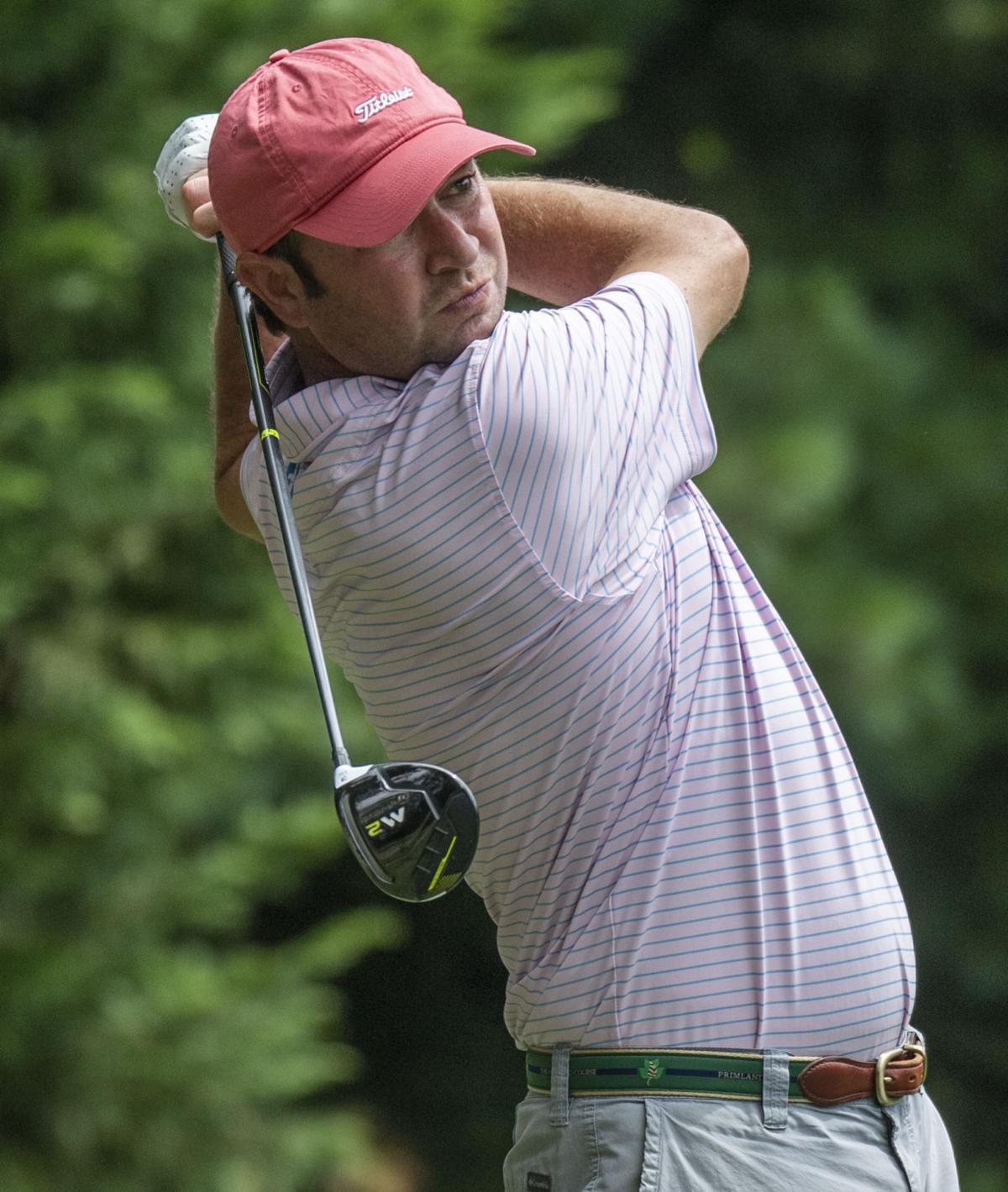 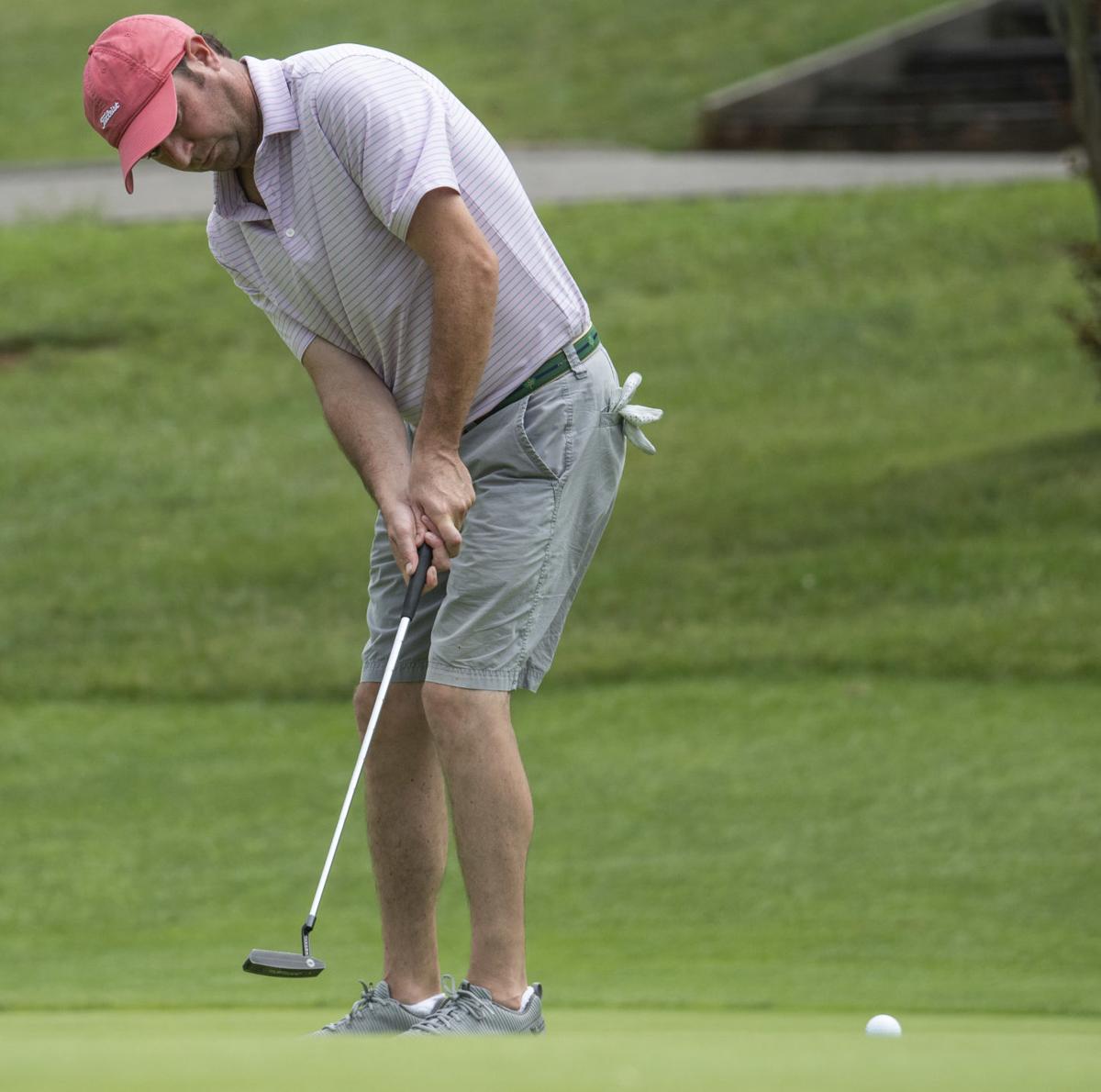 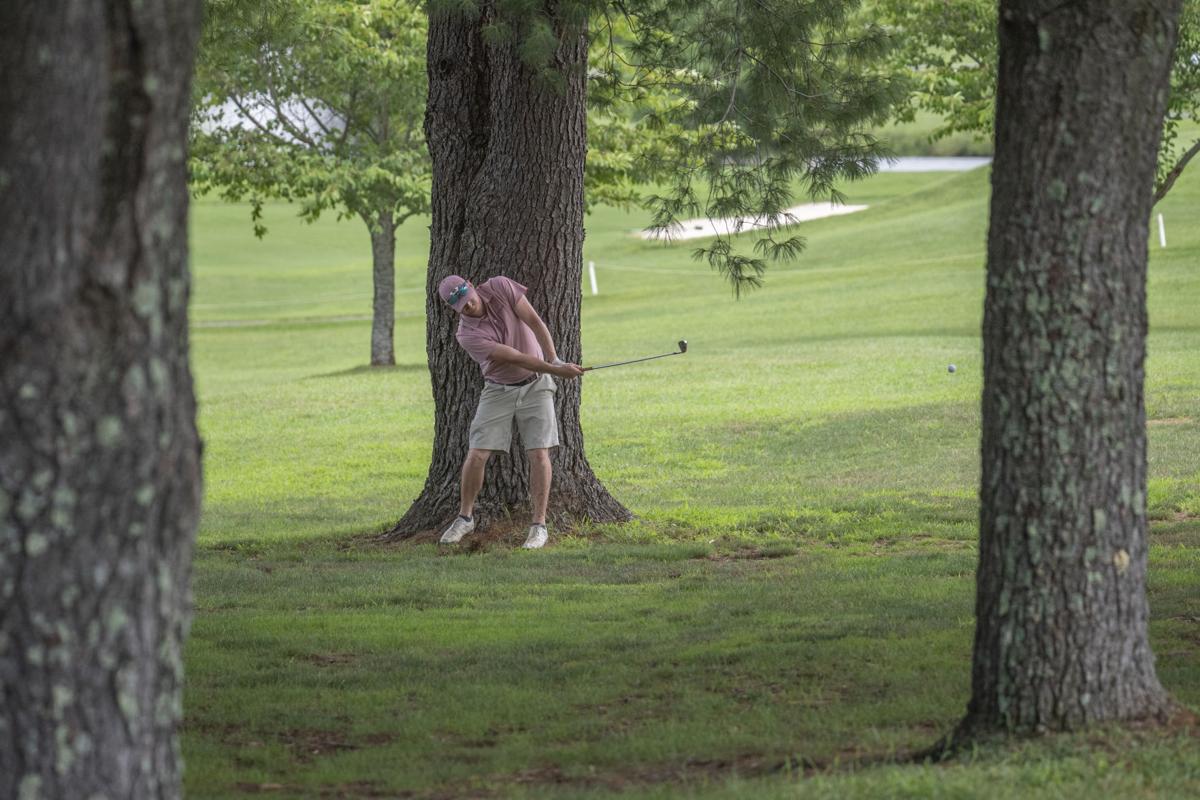 Christopher Davis watches his shot through the trees to the fairway during the qualifying round of the Roanoke Valley Match Play Golf Championship at Blue Hills Golf Club on Friday. 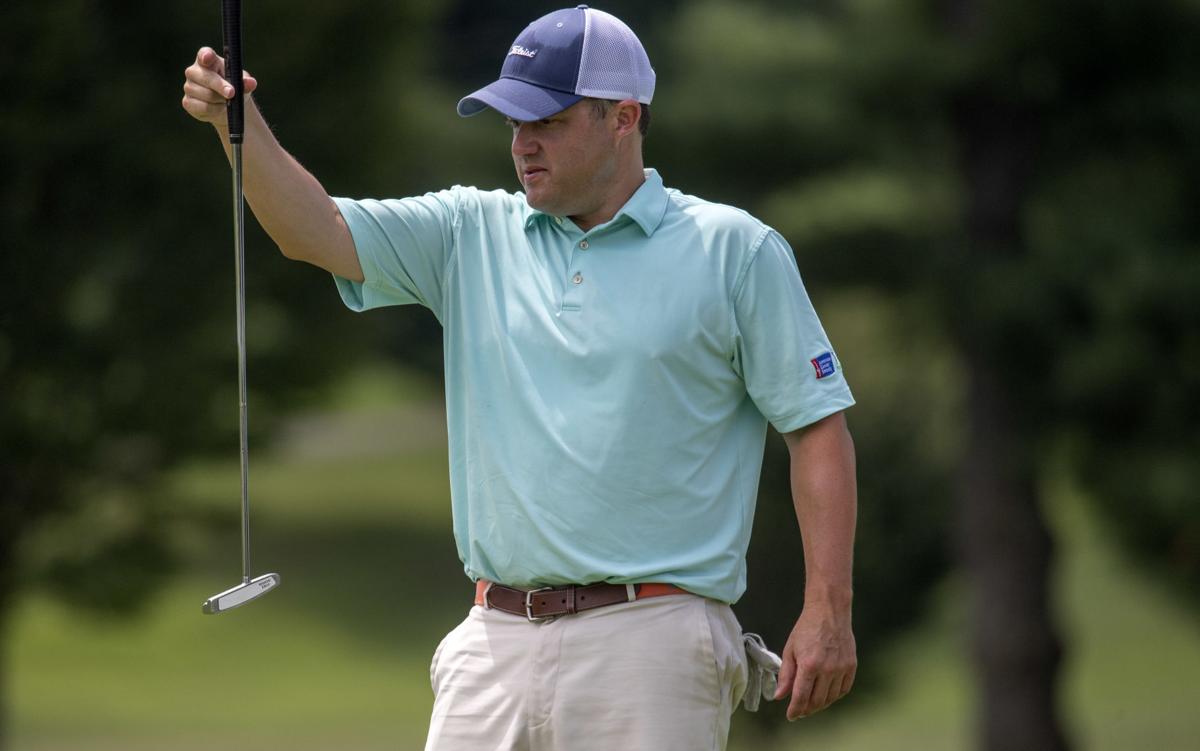 Brandon LaCroix lines up a putt at the Roanoke Valley Match Play Golf Championship at the Blue Hills Golf Club on Friday.

By Randy King Special to The Roanoke Times

Eight weeks after being diagnosed with COVID-19 after playing in a celebrity captain’s choice golf tournament in South Carolina, Roanoker Chase Bailey proved Friday that he’s a tough cat to take down.

Showing little signs of distress in Friday’s Amateur Division qualifying for the 2020 Roanoke Valley Match Play at Blue Hills Golf Club, Bailey fired a 3-under-par 68 at Blue Hills to earn medalist honors and the No. 1 seed heading into Saturday’s start of match play in the three-day event.

“When I got back from [South Carolina,] I got a call from a guy and he told me to go get tested because he had tested positive … somebody who was in my group,” Bailey said.

“So I went and got tested here in Roanoke, and they recommended that I go into quarantine right away. So I called Hall of Fame head man Darrell Craft that night and said I’ve got to drop out because if I give it to somebody I would feel terrible.

“Just two weeks of just misery, just feeling like a prisoner because you’ve got to quarantine and stay away from people … the only thing you can do is just talk to them on the phone.”

There were no phone calls this day as the ox-strong Bailey was busy parlaying five birdies with a pair of bogeys to post a 3-under-par 68 and take low honors in Amateur Division qualifying.

“I can’t play more than two days in a row and this is my fifth day this week. I was exhausted out there.”

Bailey will face No. 16 seed Bryce Tackett of Roanoke in Saturday’s first round of match play.

Multi-time Roanoke Valley major champion Matt Chandler struggled while posting a 72 to earn the sixth seed in the match play bracket. Chandler will face No. 11 seed Keith Marks of Midlothian.

“Match play, you know, is a whole different game,” Chandler said. “You would like to have a higher seed, but getting a round over this course maybe you can play a little better [Saturday]. Who knows?

“It’s not that tough out there, it’s easy really. Nothing is working real good. I missed a couple of short ones, I could have shot 4 of 5 under on the front easily, but I didn’t do it. I could on the back nine I just got scared. Coming down I just felt like I was going to lose the club on every shot … just slapping it around and you can’t play golf like that.

“I drove it pitiful on the back nine. I had wetness in my hands … I just whiffed a drive on 18, did that like three times on the back nine. The rain didn’t help. If I didn’t have to play, I wouldn’t,” said Chandler, who recently recorded a 61 at Franklin County’s Willow Creek Golf Club.

John Hatcher Ferguson, who won the Hall of Fame men’s title last month, struggled somewhat but still is a force to reckon with. Ferguson will meet No. 10 Luke Hoffman of Roanoke on Saturday.

Powell, who just turned 50, carded a 69 to win the top seed in match play by a shot over former division winner Tim Moore of Morristown, Tennessee.

“I didn’t play my best golf today, but I played smart and I actually learned quite a bit from playing some practice rounds with some guys like Darrell Craft and Mark Funderburke and not going at every pin,” said Powell, who finished fourth in the HOF Senior.

“Today I struck the ball pretty decent and I got myself out of position and was able to get out of it,” Powell said. “I worked out here about 15 years ago mowing greens, so I know them quite well.”

The Danville native has made the best of what could have been a bad situation, Powell said.

“I got into the wrong kind of stuff so I came here homeless,” he said. “Now I work at the [Veterans Affairs Medical Center] in Salem. I work in the homeless clinic, and vets are struggling finding housing and employment.

“The real story is this community became my second family. They showed me the type of love that normally family does.”

Roanoke’s Carl Leonard, who recently won the HOF Super Senior crown, led Super Senior play with a 69 that was matched by Blue Hills member Van McCarter. Troutville’s Chips Wooddy was third with a 70. Salem’s Jack Allara was fourth with a 72.

Results of the qualifying round of the Roanoke Valley Match Play golf tournament, played at Blue Hills Golf Club:

Stephen Barber Jr. scored 30 points, including 13-of-17 from the free-throw line as Glenvar used a big fourth-quarter run Friday night to pull…

Senior defensive back and running back Matt Strong has accepted a preferred walkon offer from Virginia Tech, which has been the Hidden Valley star’s dream destination.

Chase Bailey lines up a putt during qualifying at the Roanoke Valley Match Play Golf Championship at Blue Hills Golf Club on Friday.

Darrell Craft reacts after missing a putt at the Roanoke Valley Match Play Golf Championship at the Blue Hills Golf Club on Friday.

Christopher Davis watches his shot through the trees to the fairway during the qualifying round of the Roanoke Valley Match Play Golf Championship at Blue Hills Golf Club on Friday.

Brandon LaCroix lines up a putt at the Roanoke Valley Match Play Golf Championship at the Blue Hills Golf Club on Friday.