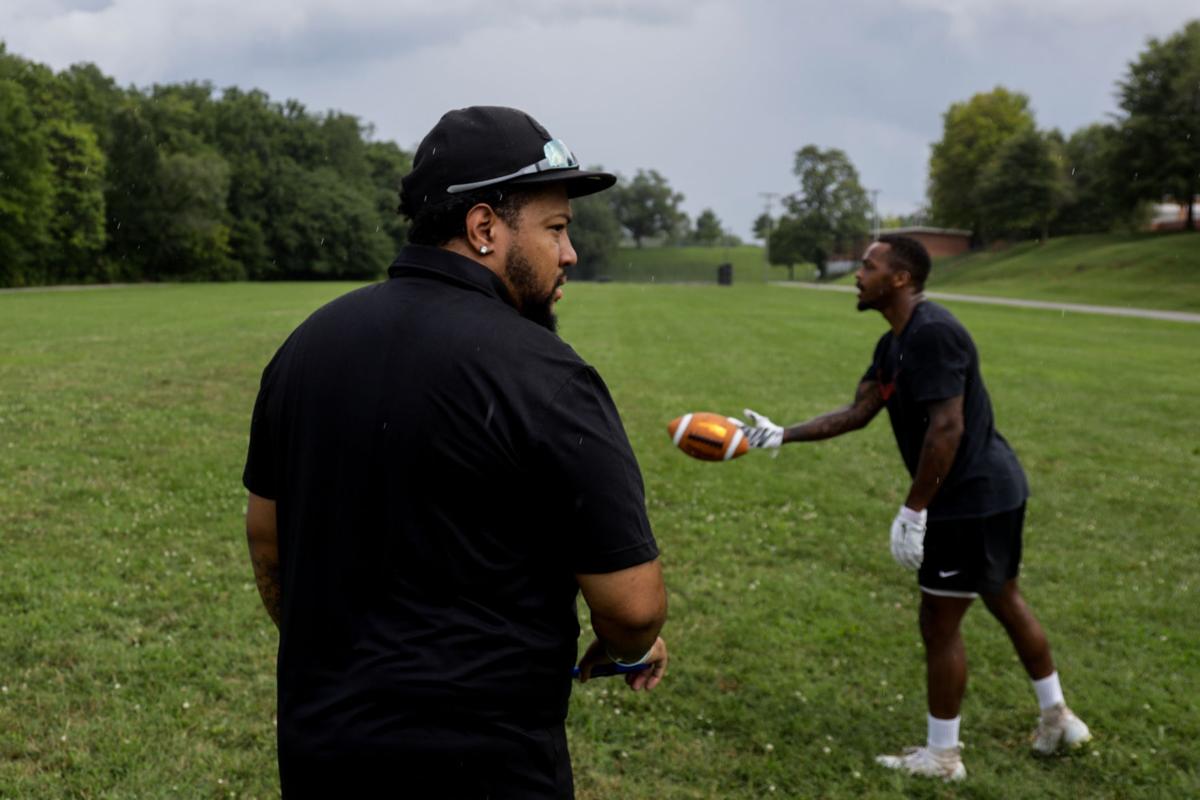 Coach Pope Mitchell looks on as his team warms up during the Roanoke Rush’s semipro football practice on Saturday at Lucy Addison Middle School in Roanoke. Mitchell, who is a first-time head coach at the semipro level, is also the team’s owner and general manager. 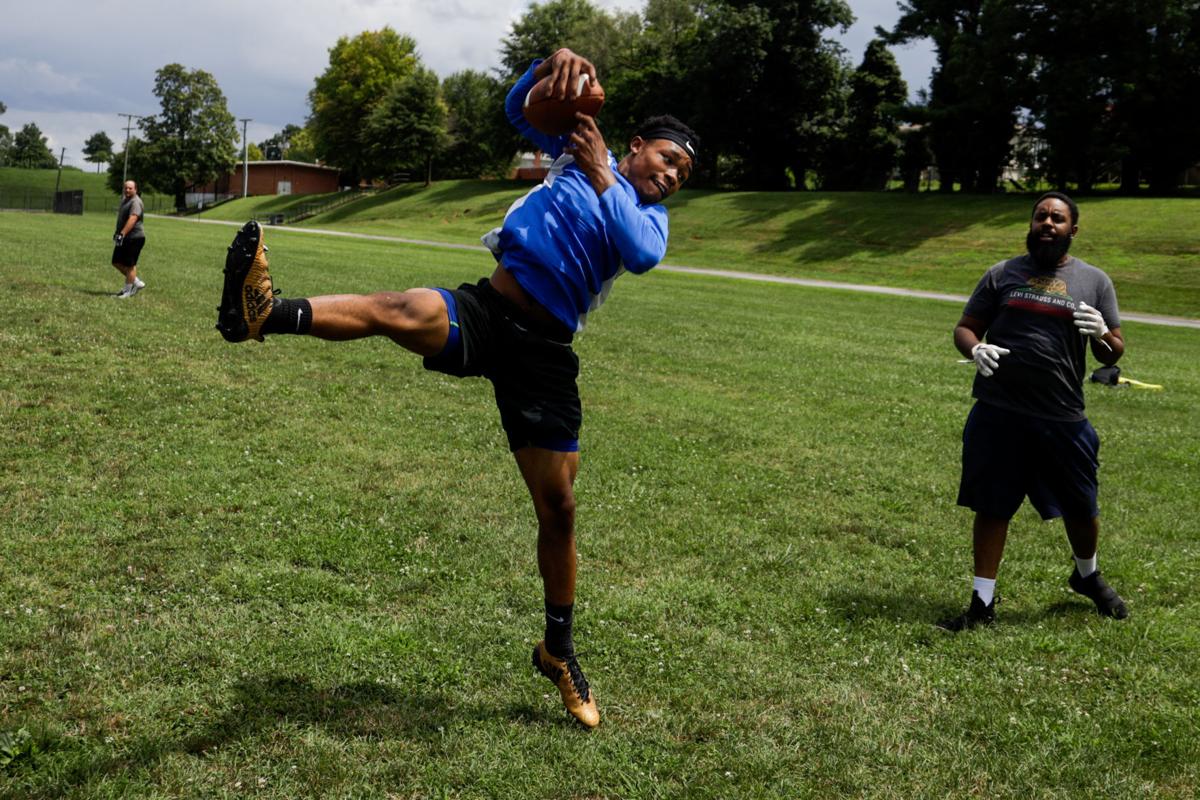 Lawon Jones (left), 19, hauls in a pass as his teammate, Bryant Mack of Vinton, looks on during a Roanoke Rush semipro football practice on Saturday at Lucy Addison Middle School. Jones is a William Fleming High School graduate. 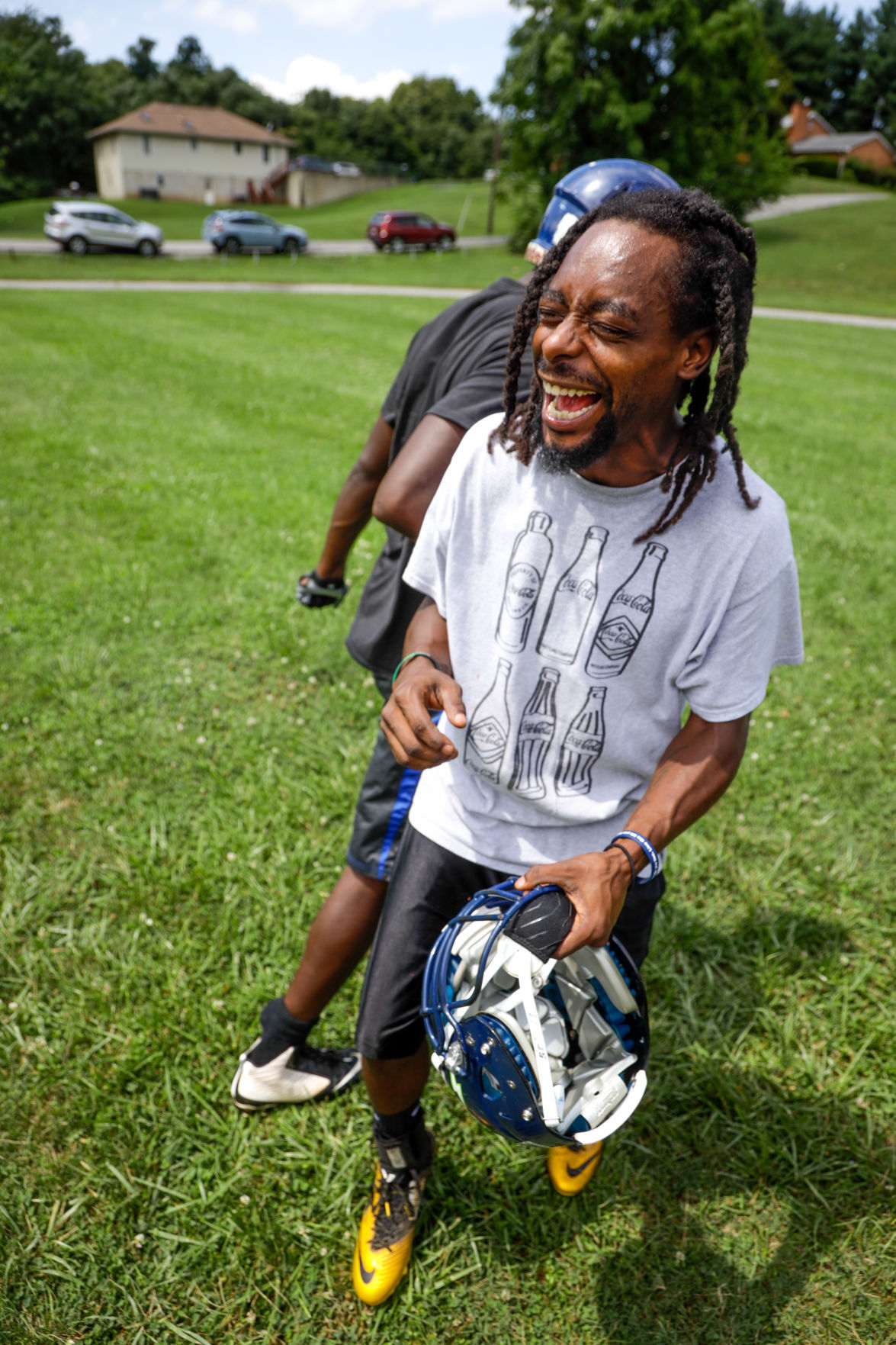 Carlos Taylor, a 30-year-old defensive back, laughs with a teammate during a Roanoke Rush semipro football practice on Saturday at Lucy Addison Middle School in Roanoke. 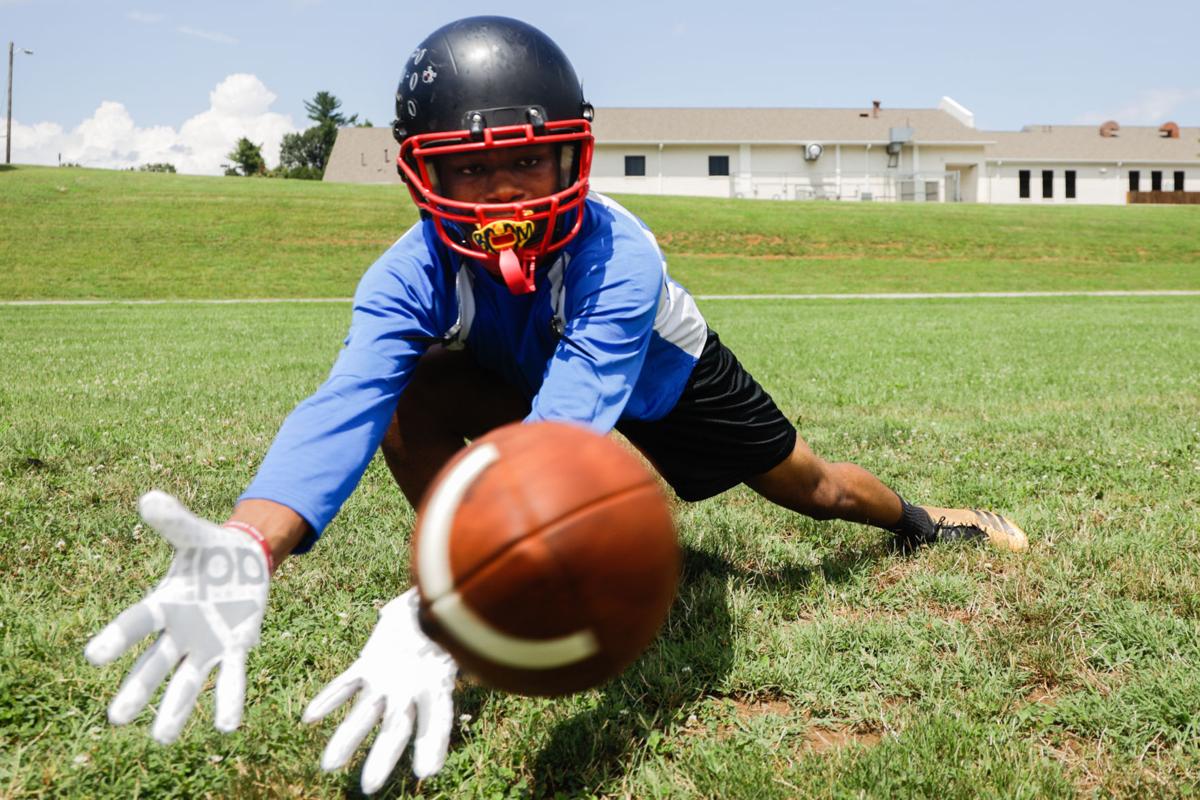 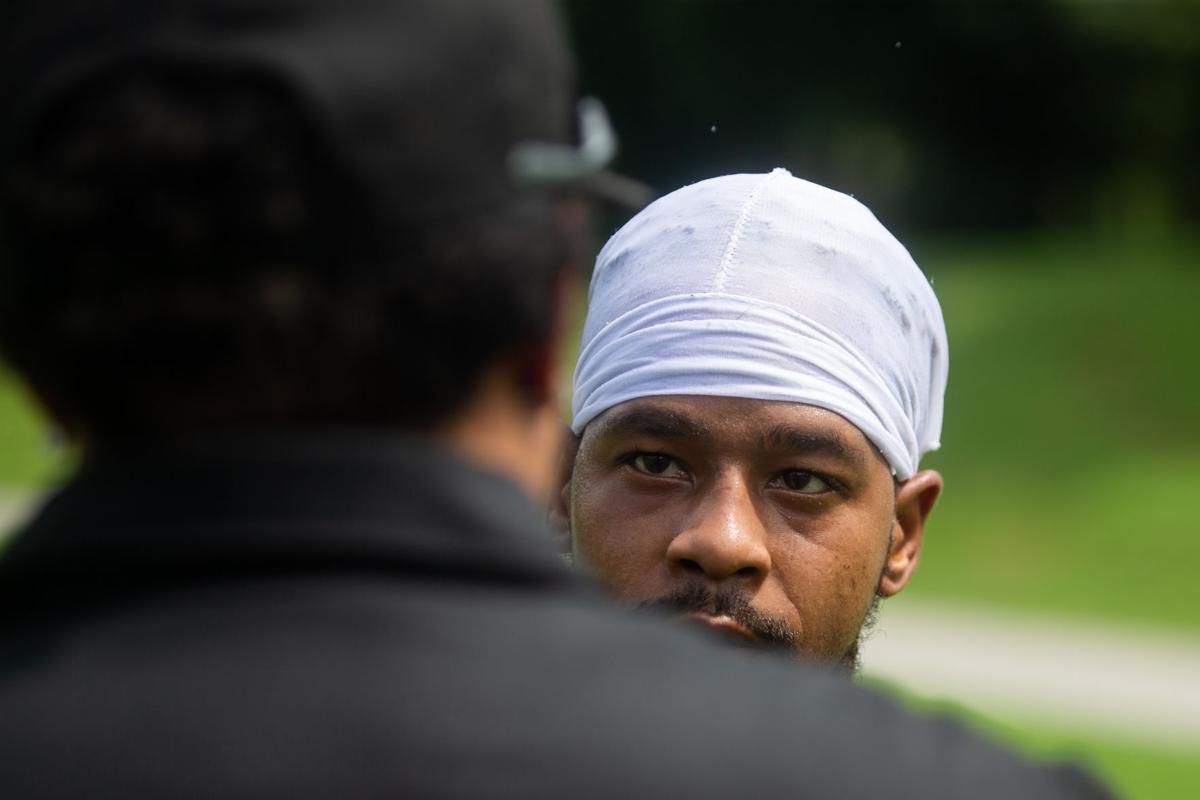 By Ray Cox Special To The Roanoke Times

Motivation varies for members of the adult workforce who play football without benefit of pay.

The first counts those still chasing a pot of coin at the end of the gridiron rainbow. The second includes those who never lost their taste for laying out somebody.

As for that second group, playing a collision sport for free is not only an end in itself, but the athletes are willing to pay for the privilege.

Both types may be found in the Atlantic Coast Football Alliance. Its newest member is a local squad dubbed with the nostalgic revival name Roanoke Rush.

If the name sounds familiar to longtime observers of the local sporting scene, it is. The first outfit so named debuted at now-demolished Victory Stadium on Aug. 12, 1995.

Shawn “Pope” Mitchell, whose three hats for the new Rush are owner, general manager and head coach, was aware of the history. Before the first snap, he secured the name revival OK of former impresario, now Del. Nick Rush, R-Christiansburg.

“I can remember my father taking me to some of their games at Victory Stadium,” said Mitchell, a 2006 Glenvar High graduate. “I loved the tradition and the name.”

The Roanoke ballclub opens its inaugural campaign Sept. 12 on the road at a neutral site against an opponent to be named. The Rush, who play the level of football for grown-ups known as semipro, will know who is on their nine-game slate when the league — “The Alliance” — releases its schedule later this month.

The three-round playoffs conclude Dec. 5 with the championship.

Roanoke has a 33-man roster of athletes mostly culled from home-grown sources available for duty when the season opens.

The age range involves recent high school graduates and first-year semipros such as Lawon Jones of the William Fleming class of 2019 to 30-year-old Carlos Taylor, who will be playing his fifth season of football at this level.

Taylor, a father of two who works for Coca-Cola, never played football but ran track at Fleming. Starting by playing no-pads tackle ball in weekly games with friends at Oakey Field in Salem, he joined the now-defunct Star City Rebels when he strapped on the equipment for the first time.

“I didn’t know anything, even what position I should play,” he said. “I told the coach to put me wherever he thought I should be.”

The Rebels were a start-up that lasted three seasons before folding.

Taylor had a great experience, though, and was delighted to join forces with another fledgling organization.

Rookie though he may be, Jones is already talking like a veteran.

“Some of us have already been playing flag football together,” he said. “We have chemistry.”

Jones and Taylor could be thought of as being at opposite ends of the motivation spectrum of playing ball at this level. Jones, who works for a screen printing business, wouldn’t mind seeing where football takes him.

The team has been practicing since November, weekly since February. They meet Saturdays at the Lucy Addison track.

The Association has both fall and spring seasons. The 2019 fall season included eight teams divided by the old Mason-Dixon line. The National Alliance included York, Pa.; Washington; Baltimore; and Harrisburg, Pa. The American Alliance included Richmond along with Raleigh, Fayetteville, and Jacksonville in North Carolina.

Appropriate coronavirus pandemic safety measures will be in place this season, Mitchell said. Guidance is being sought from protocols of recent summer league participants in the Coastal Football Alliance, he said.

Cost to participants include a $125 player fee paid to the league in addition to out-of-pocket expenses such as equipment and travel. The Association provides insurance that partially offsets loss of work and medical expenses resulting from injuries, Mitchell said.

Although crowds are typically modest for games at this level, scouts from various pro leagues attend Association games. Both Mitchell and veteran semipro Taylor are aware of players who have parlayed semipro experiences into a pro contact.

“We want to build something people can be proud of that will be here for a long time.”

Stephen Barber Jr. scored 30 points, including 13-of-17 from the free-throw line as Glenvar used a big fourth-quarter run Friday night to pull…

Senior defensive back and running back Matt Strong has accepted a preferred walkon offer from Virginia Tech, which has been the Hidden Valley star’s dream destination.

Coach Pope Mitchell looks on as his team warms up during the Roanoke Rush’s semipro football practice on Saturday at Lucy Addison Middle School in Roanoke. Mitchell, who is a first-time head coach at the semipro level, is also the team’s owner and general manager.

Lawon Jones (left), 19, hauls in a pass as his teammate, Bryant Mack of Vinton, looks on during a Roanoke Rush semipro football practice on Saturday at Lucy Addison Middle School. Jones is a William Fleming High School graduate.

Carlos Taylor, a 30-year-old defensive back, laughs with a teammate during a Roanoke Rush semipro football practice on Saturday at Lucy Addison Middle School in Roanoke.