Thank you for reading!

Get Started
You have permission to edit this article.
Edit 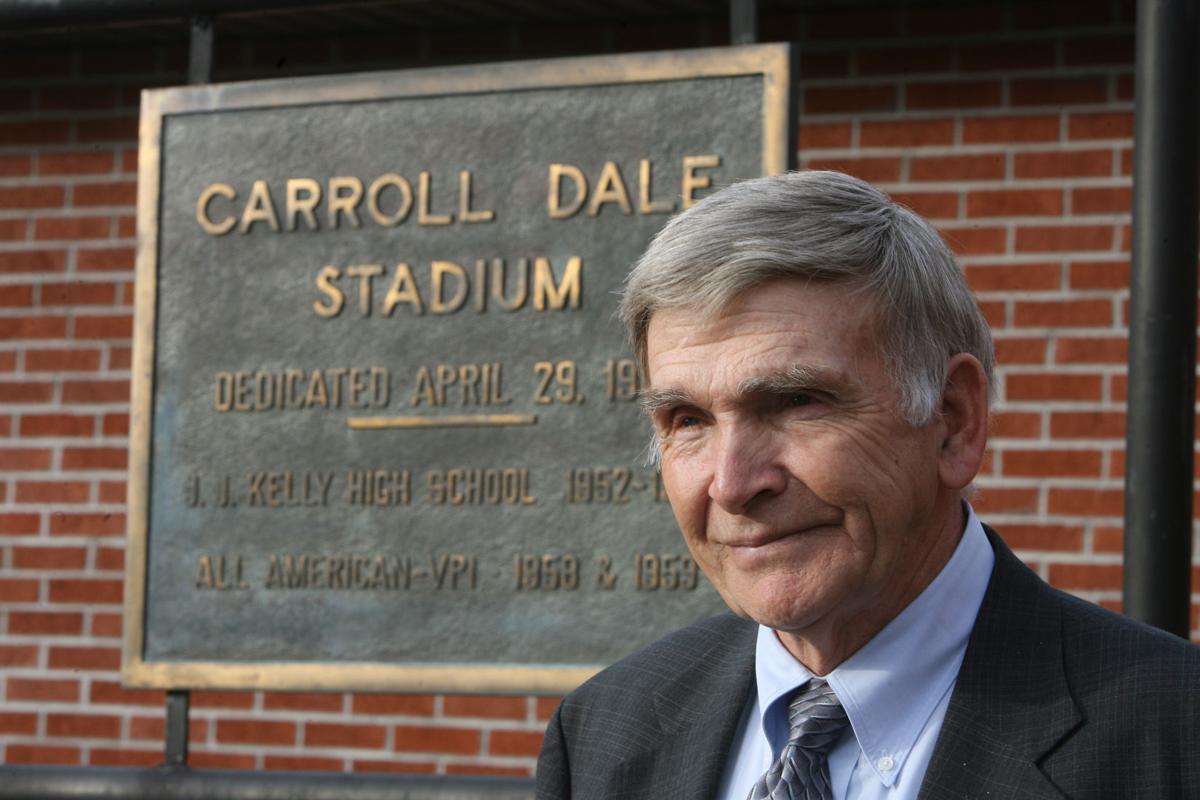 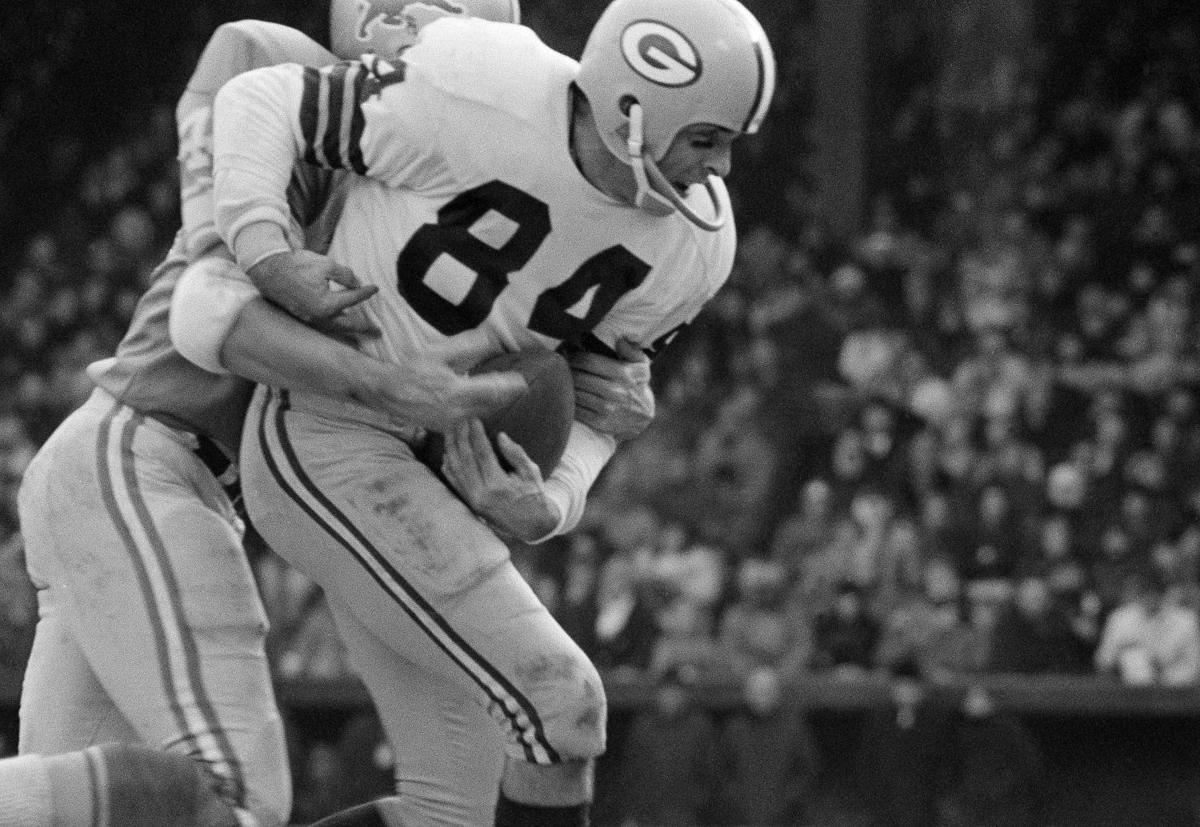 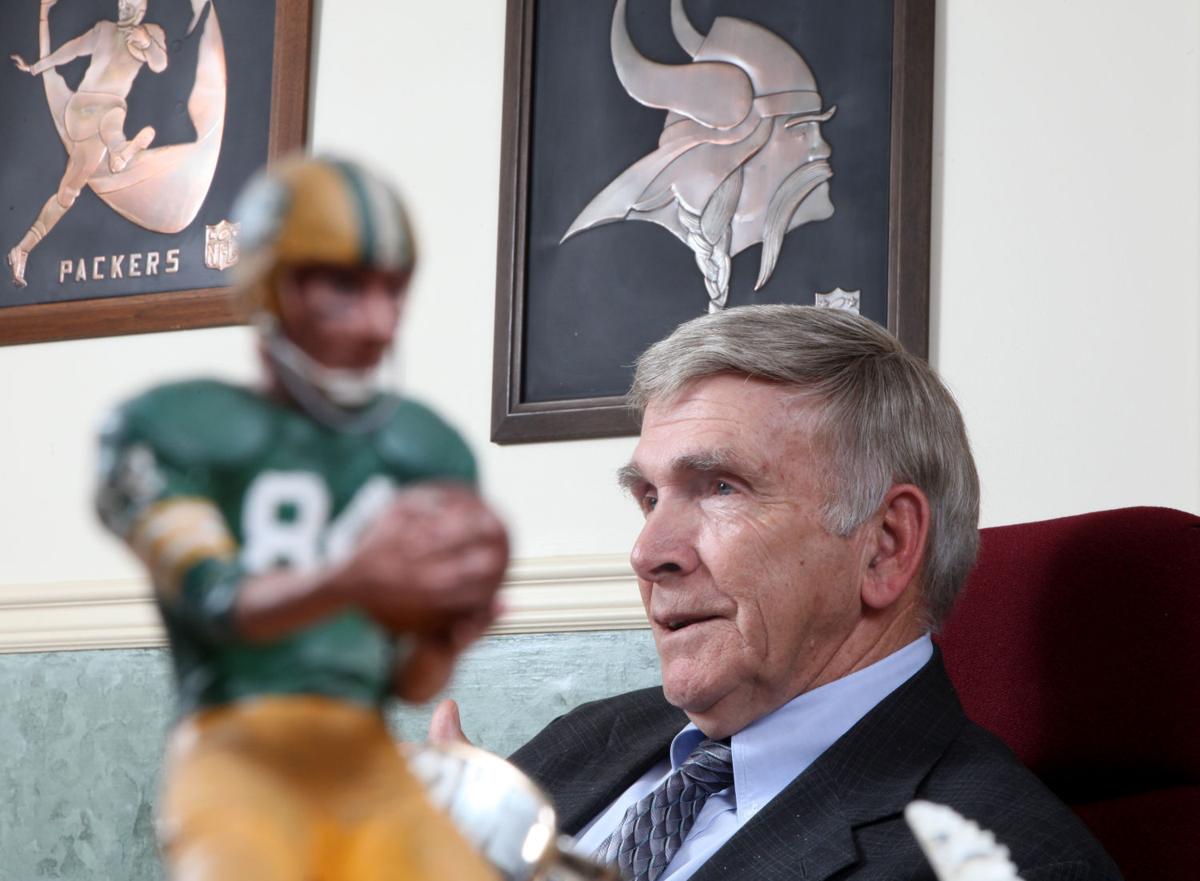 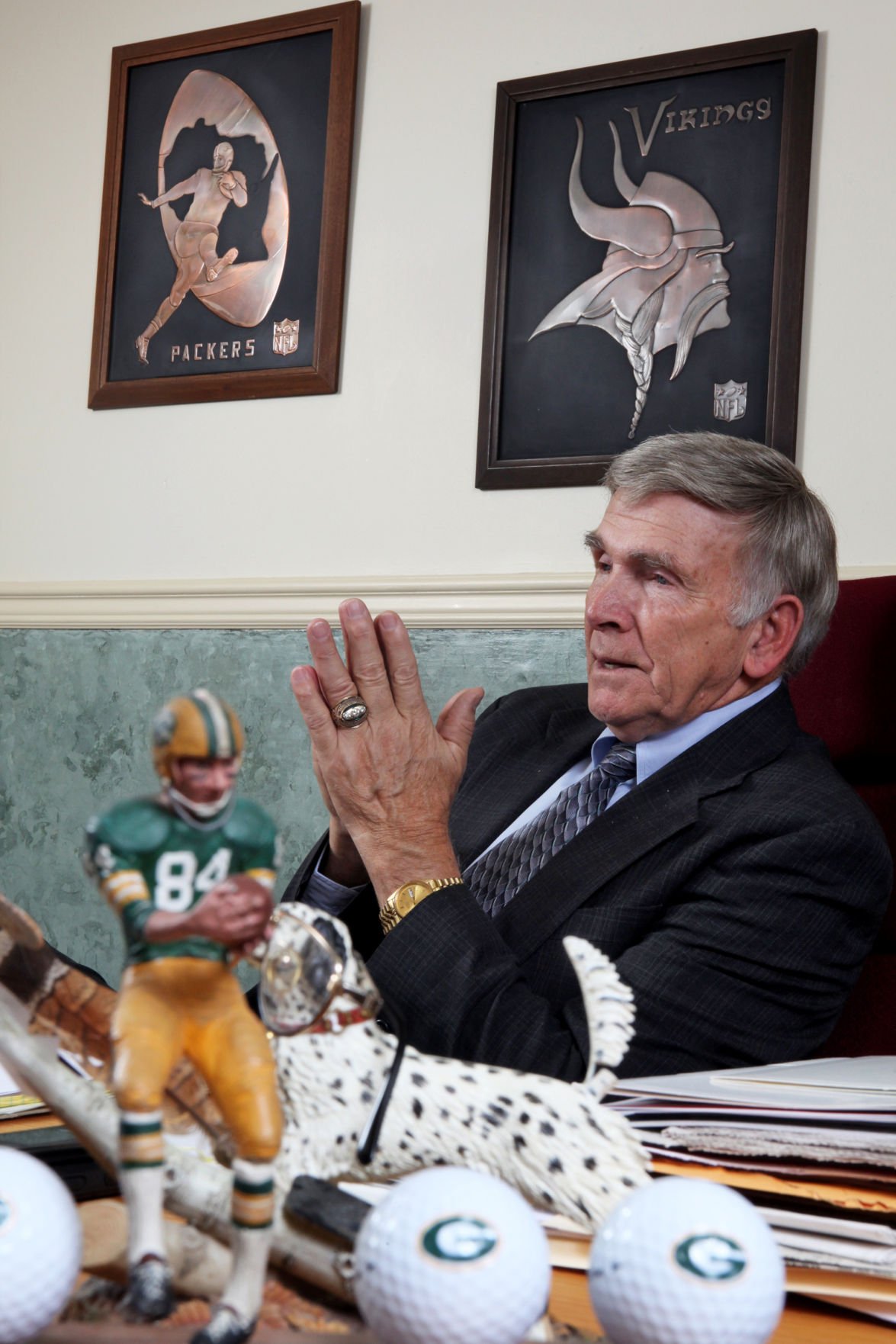 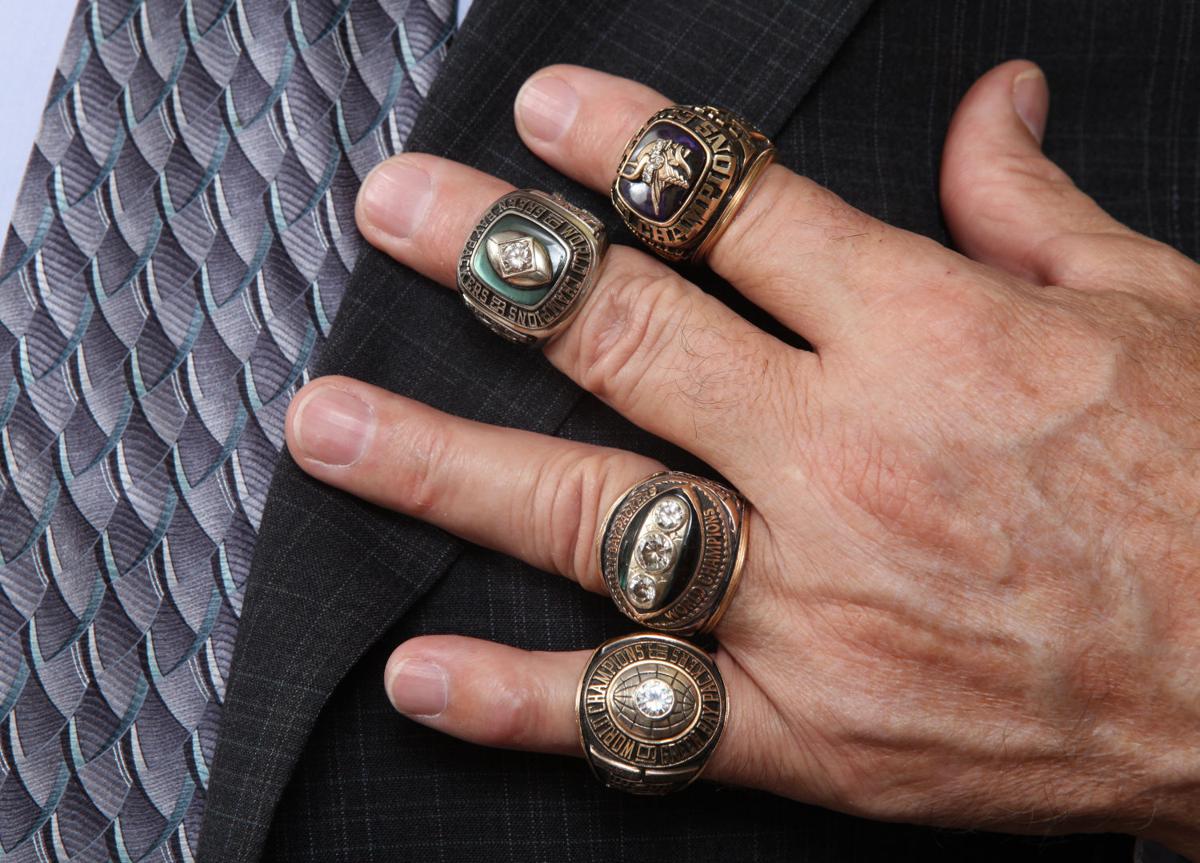 WISE — Carroll Dale likes to joke that, at 72, he hasn’t retired because his office here is the only place big enough to hold his trophies.

From one wall, the 22 players of the 1967 Super Bowl-winning Green Bay Packers look down from a photograph. Against another sits a row of one-bar face mask helmets. On a third wall hangs a picture of Dale, wearing a green-and-gold jersey as he beams and cradles the pigskin.

And so on. There’s no bare space.

“What else am I going to do with all this stuff?” Dale asked with a shrug.

During the snowy winters of Western Virginia’s Appalachia, the favored passion is football, and, in this town, the favored player is Dale.

As in: Carroll Dale, the homegrown wide receiver who played for Virginia Tech and got the collegiate All-America title in 1958; Carroll Dale, who started for the Green Bay Packers when they won the first and second Super Bowls in 1967 and 1968.

These days, Dale raises money for athletics at the public liberal arts college here, the University of Virginia’s College at Wise.

His old team is back in the Super Bowl today, so he drove his SUV down the mountains to Abingdon last week. He spoke at the Rotary Club. He spoke to a local radio station. Tonight, he’ll talk to the Baptist and Wesleyan student associations here, quoting the Bible and the fabled Packers coach Vince Lombardi. He predicted the Packers will win tonight’s game, 14-10.

Dale is a legend that people look to for inspiration, but still lives up the road with his wife and two dogs. Two Super Bowl champion rings will give any man stature. Dale uses his to win support for his town — and to build up the athletic department here.

“Carroll could work at bigger places. You know that, and I know that,” said Winston Ely, senior fundraising advise r of the College at Wise. “I’m sure Virginia Tech would be glad to have him.”

The population in Wise, nestled in coal country between Kentucky and Tennessee, held at about 3,200 from 2000 to 2010, according to the census. Most jobs within an hour’s travel are in mines or related services that are declining. The biggest growth has been at the college, founded in 1954 to offer higher education for people who didn’t want to leave the region. It now enrolls about 2,000 students, 40 percent of them from elsewhere.

When the college was considering a football program in the late-1980s, Dale was called for the feasibility study. Since he retired from professional sports in 1974, he and his wife, Pat, had been living in Bristol, Tenn., where they ran a mining company that strip-mined land next to the house in Wise where he grew up.

By January 1991, the college hired its first football coach. By June, Dale had been hired as athletics director. And by September, the Highland Cavaliers began their eight-game season, playing home games at local high school stadiums.

Near their practice field, they built a locker room without clearance from administration at the University of Virginia using galvanized pipes for clothes hooks, Dale said.

“We had nothing,” he said. “We barely had time to get ready.”

Dale isn’t the only son of Southwest Virginia to bring home gridiron victory. Heath Miller, a tight end from Honaker High School in Russell County, will start for the Steelers tonight and played for Pittsburgh during Super Bowl wins in 2006 and 2009.

Mike Compton, a guard from Richlands High School in Tazewell County, played for West Virginia University and started for the New England Patriots in the Super Bowl in 2002. He now coaches at Patrick Henry High School in Washington County.

Bill “Bullet Bill” Dudley, a halfback from Bluefield, was the first All-American player at the University of Virginia who, when he joined the Pittsburgh Steelers in 1942, led the   National Football League in rushing yards. He was inducted into the Pro Football Hall of Fame in 1966. Beattie “Big Chief” Feathers, from Virginia High School in Bristol, punted for the Chicago Bears from 1934 to 1940.

Dale played for the Los Angeles Rams until 1965, when he was traded to the Packers, a once-moribund team that Vince Lombardi turned into the dynasty of the 1960s.

Super Bowl XLV will be drastically different for Packers quarterback Aaron Rodgers   and for players’ paychecks, which are several folds bigger. But the quality of the game will likely be about the same, Dale said.

Unlike Starr, today’s quarterbacks wear a headset inside their helmets and can hear instructions from their coaches. Starr and Rodgers are both students of their opponents’ defensive line and natural leaders, Dale said.

“Now, Rodgers has a script to follow. It has probably taken some pressure off of him,” Dale said.

Rodgers made $8.6 million this season, according to USA Today. Dale won’t say how much he and his teammates got, but he put it this way: In his 14-season career, he made as much as Rodgers was paid for one game this year — about $573,000. “That part has changed greatly,” Dale said. “Don’t blame the players. There are no regrets. … Of course, they do help our pensions.”

“We had some big guys, but there were few,” said Dale, who is 6 feet 2 inches tall and tipped the scale at 205 pounds. “There’s just more of them now.”

The football stadium at Dale’s alma mater, J.J. Kelly High School, here was named after him in 1967. A local coal company, Clinchfield Coal Corp., brought him in a helicopter that landed on the field while students waited in the stands. The usually understated Dale got out, said a few words and left for another engagement.

He said he’s been speaking to young people since he was in college, where he joined the Intervarsity Christian Fellowship. Most of the time, his message centers on setting priorities in life. For him, the priority has been his Christian faith.

When he was a teenager, he found a verse he said he’s been following since — Matthew 6:33.

It says: “But seek ye first the kingdom of God, and his righteousness; and all these things shall be added unto you.”

Translation: “I didn’t think being a Christian would make me a successful football player, but having this first helped everything else fall into place,” Dale said.

The other gospel he preaches is that of his coach Vince Lombardi. Dale carries in his wallet a card with Lombardi maxims such as “It’s not whether you get knocked down; it’s whether you get up,” and, “Winning is not everything — but making the effort to win is.”

One he sometimes quotes in conversation is this: “The harder you work, the luckier you get.”

“I respect him 100 percent, not only as a football player, but as a person,” Ferguson said. “He is still today very admired.”

Just the other day, a Lombardi line snuck its way into the high school’s weight room, between the 100-pound dumbbells and the laundry room. The varsity team has started weight training for the fall season, and one of the players wrote on a dry eraser board on the wall: “The harder I work, the luckier I get.”

Corrected Feb. 7: The location of Honaker High School and the name of the company that airlifted Dale in 1967 were incorrectly reported in the original version of this article. It has been corrected.