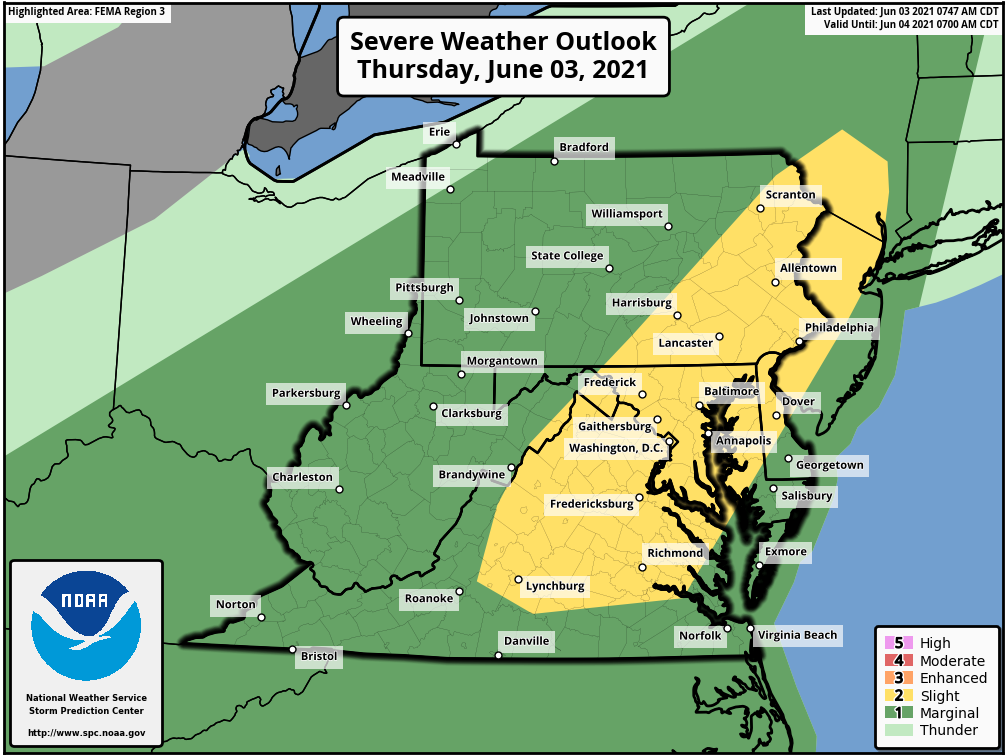 Weekend rains weren't enough to lift our region out of its "abnormally dry" status -- as was discussed in the latest Weather Journal column. In fact, many areas from Roanoke eastward have been upgraded to "moderate" drought in the latest U.S. Drought Monitor issued on this Thursday.

The region is due for some more help for the dryness from showers and thunderstorms this afternoon and evening. This could be similar to Friday, with streaky amounts. Most (though possibly not all) locations will get some rain, and a few spots will get heavy totals exceeding an inch. Most will end up somewhere in between, with 0.25-0.75 common. That will not be enough of a widespread soaker to wash the yellow and beige colors off the Drought Monitor map.

There is also the potential for some strong to severe storms this afternoon and evening, especially east and northeast of Roanoke. A trough of low pressure and weakening cold front will be approaching from the west, with moisture lifting northward in front of the trough. There may be enough instability with peekaboo sunshine warming low levels of the atmosphere and enough wind energy aloft for some stronger thunderstorms to develop this afternoon and early evening. Localized damaging wind will be the main threat, though an isolated tornado can't be ruled out.

The drought monitor upgrade may be a bit of surprise, especially if your location got ample rain this past weekend, but those rains were a bit streaky around the region rather than general coverage, especially east of the Blue Ridge that largely missed the bulk of weekend rains. Also, stream flows are a factor in the Drought Monitor mapping, and the amount of rain we had this past weekend was largely absorbed by spring plants and trees and didn't run off as much into streams as more widespread, heavier rain would have.

As the trough and cold front move closer and sort of wash out over us on Friday, there may be additional showers and storms, probably with less coverage than on this Thursday. Warm, dry weather -- 80s highs, 60s lows -- takes over for the weekend with little or no chance of rain. Scattered afternoon showers and storms popping up in the afternoon heat may pick up some in the early to middle part of the coming week as moisture rebuilds somewhat.

The general theme for the next several days will be that overall widespread dryness will not be totally relieved though may receive some help from occasional showers and storms, and fairly typical to slightly warmer than normal late spring/early summer sets in for an extended period over the weekend into next week.

Temps across Va. are at a six-year low so far in 2021, but still warmer than most of the 20th century

Judging by recent years, it could seem like Virginia has experienced more in the way of cool and dry conditions in 2021.

Ask the Weather Guys: Is the air really 'heavy' on a humid summer day?

As it turns out, the exact opposite is actually true.

Weather Journal: Pacific Northwest heat more extreme than any Roanoke area has had

Typically cool, damp Seattle has recorded a higher temperature than the Star City has ever had in 109 years of weather records.