Last week's downpours were too much of a good thing, but at least the excess rain stopped a drought from expanding into central Virginia.

The spring moisture deficits are still a problem for some parts of the region.

That's a major decline from June 8, when it sprawled across nearly 35% of the state between Roanoke and Louisa, Harrisonburg and Danville.

About half of the commonwealth is still in a less-serious "abnormally dry" category, mostly through the same parts of the western Piedmont and southwestern mountains. That zone also shrank considerably from the week before, so metro Richmond is no longer considered dry.

If the seasonal trends bear out, we will see more help for the remaining dry spots in our region but perhaps more concern for floods.

In an outlook released June 17, the National Oceanic and Atmospheric Administration expects drought removal in Virginia and some other scattered dry areas elsewhere along the Eastern Seaboard.

An already-vast drought across the western and northern portions of the Lower 48 is expected to persist and even expand.

NOAA's three-month outlook for July, August and September favors above normal rainfall across Virginia and elsewhere throughout the East and South. Below-normal rainfall is projected for much of the Rockies and Pacific Northwest.

With few exceptions, the wet states look to stay wet while the dry ones remain dry for now. The seasonal monsoon pattern could offer relief in the Southwest later in the summer, but conditions are already in place for an active and early wildfire season from California to Montana.

Despite the diverging precipitation themes, both the West Coast and East Coast are most likely to experience above normal mean temperatures in the coming months.

Data via the National Weather Service, as of June 17.

(Only stations with mostly complete data are considered when looking for the lowest totals in the state.)

• Metro Richmond: Totals generally ranged from 4 to 7 inches. Spots between Richmond and Mechanicsville exceeded 8 inches, while some in eastern Henrico county had less than 3. So for most local backyards, there's now a short-term surplus following early June's storms.

• Statewide: The eastern and northern areas were generally wetter and the southern and western parts drier, though there are localized exceptions across Virginia due to the spotty coverage of downpours. Much of Halifax County has less than 50% of normal moisture. On the other extreme, more than 300% of normal moisture fell in portions of the Northern Neck and also the Piedmont region east of Shenandoah National Park.

Past 90 days (since mid-March)

• Statewide: The lack of rain really stands out in the western Piedmont. Halifax County missed about 6 inches of the usual rainfall, so that area is less than 50% of normal. But there were also spring deficits in the Shenandoah Valley, Eastern Shore and far southwest.

• Metro Richmond: As we approach the halfway point of the year, the local precipitation totals are close to 21 inches, plus or minus 3 (that's rain and the liquid equivalent of snow and ice). For the long-term, we're either in a surplus or near normal.

• Statewide: Observed precipitation was mostly on the order of 15 to 25 inches. Some areas in the western Piedmont came in lower, with less than 75% of normal so far in 2021. Meanwhile, pockets near Covington, Strasburg, Colonial Beach and Smithfield exceeded that range and were closer to 150% of normal.

Water raced over roads in Cedar City, Utah, as heavy rains fell on the area triggering flash flooding on July 25.

People from all over the country are going to Death Valley, California, to experience the heat. 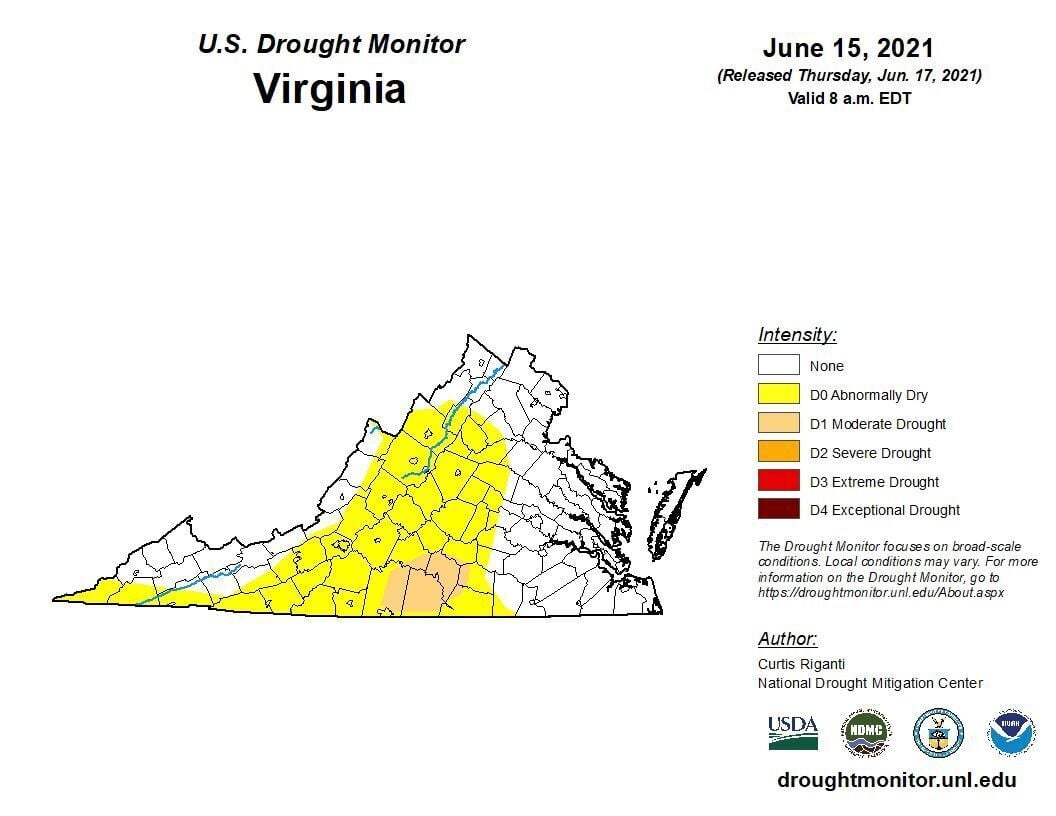 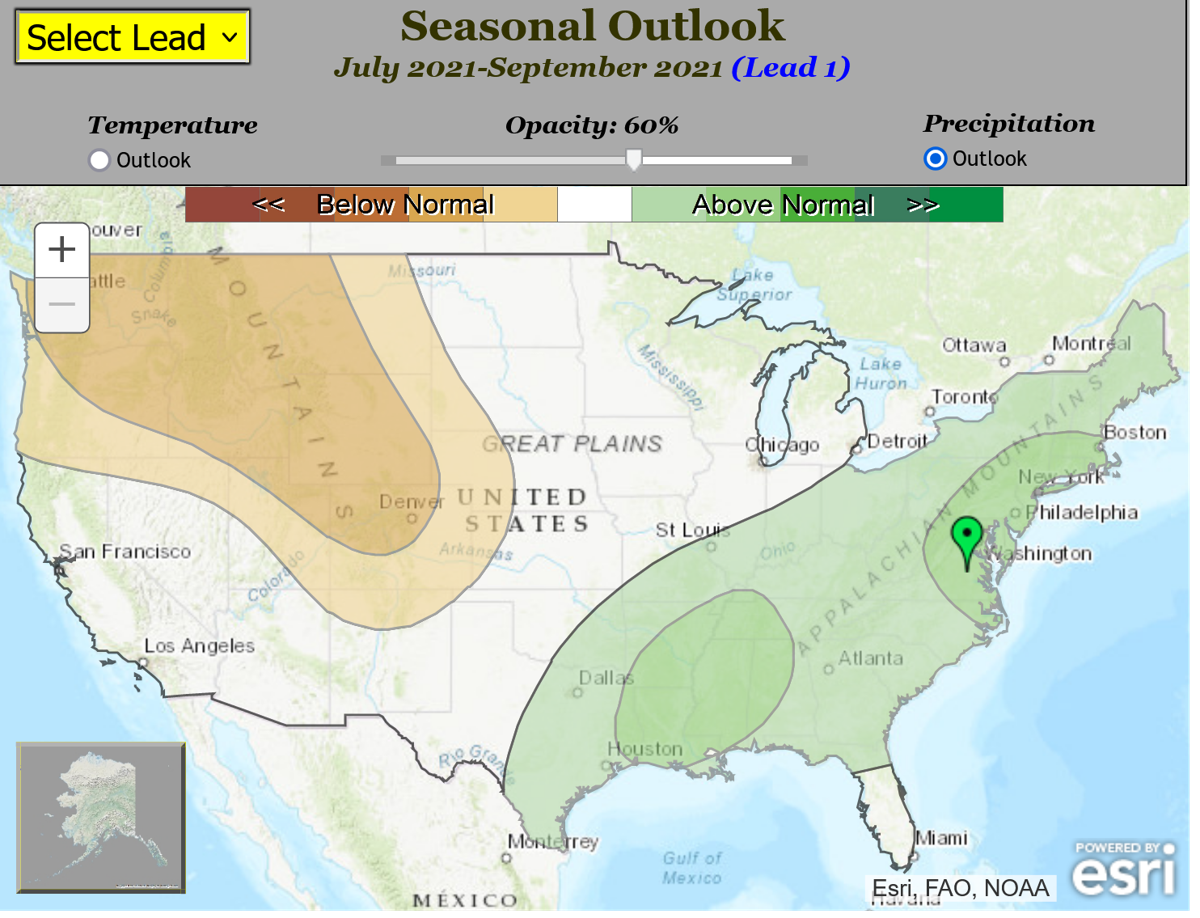 July-September precipitation outlook as of June 17, 2021. Green colors show where above-normal rainfall is favored across Virginia, while areas in brown are expected to have below-normal summer moisture. 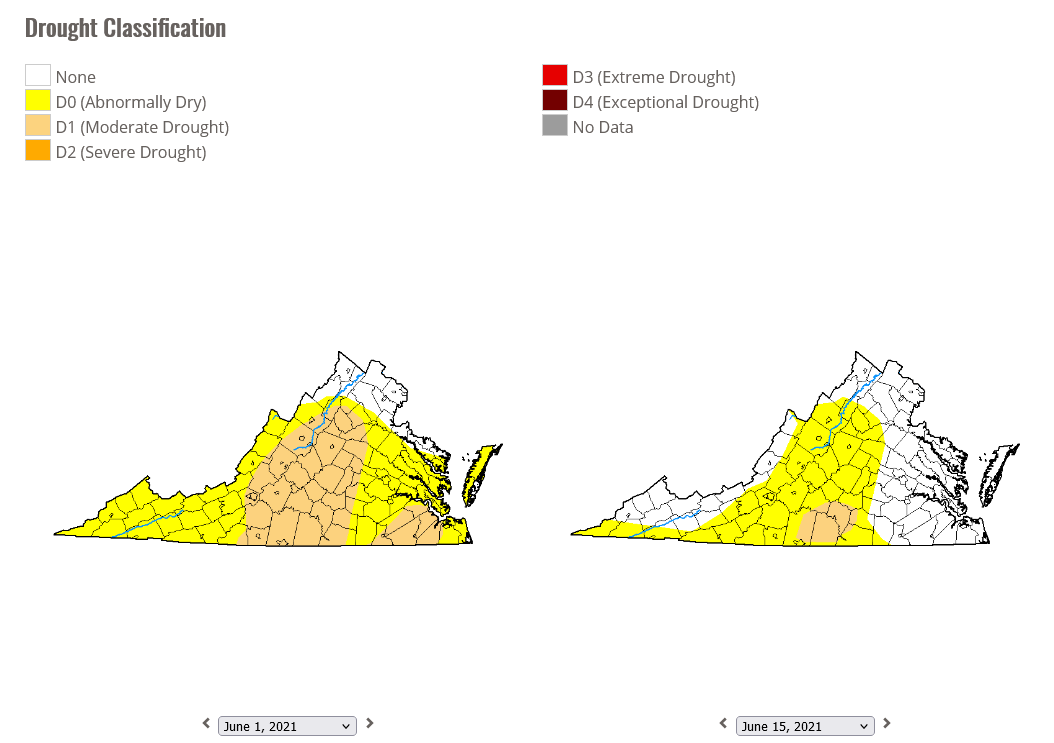