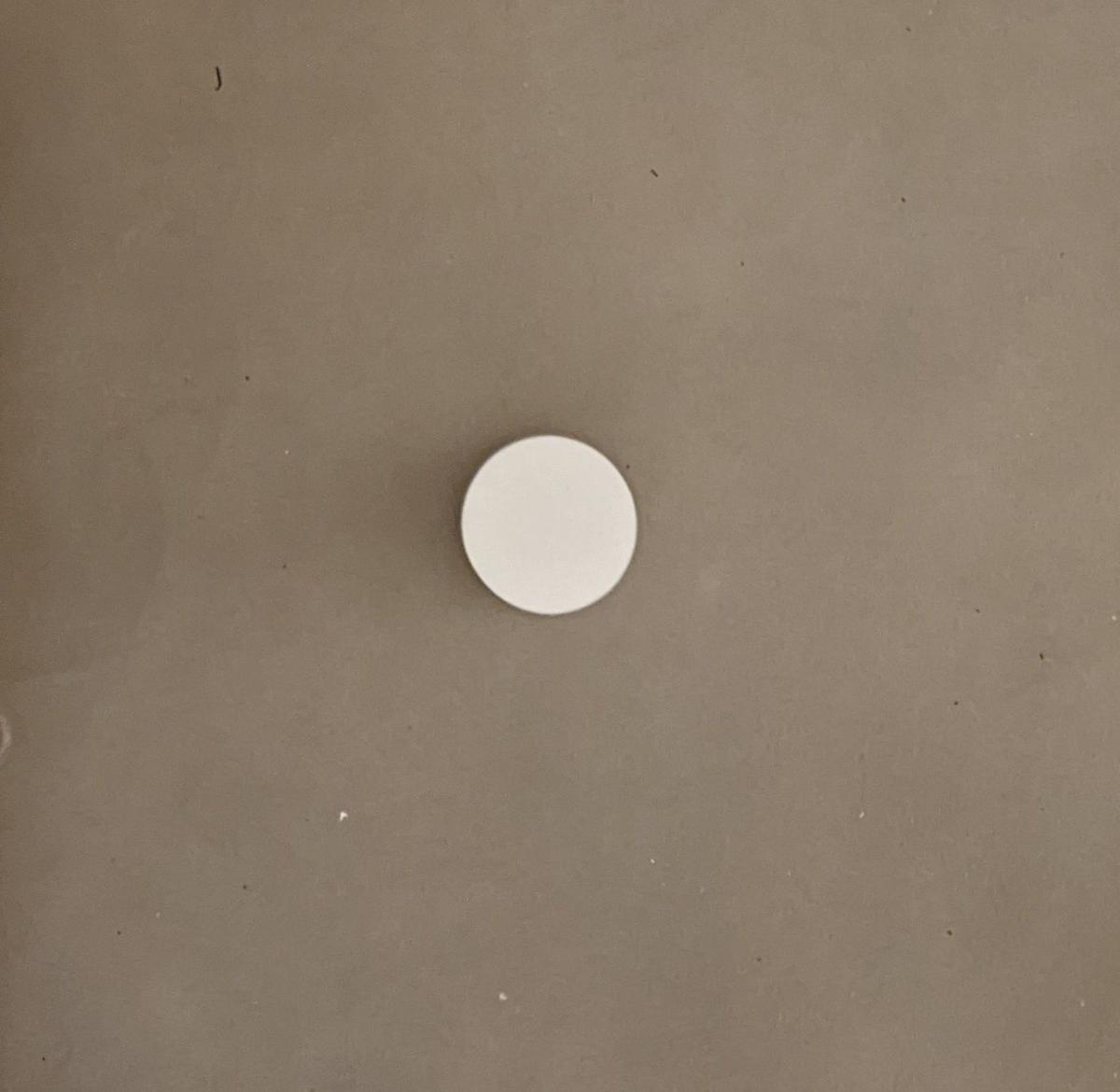 Richmond Times-Dispatch staff photo of the sun turned pink-tinged and hazy by forest fires in Canada on Sept. 25, 1950 (originally in black and white, however). 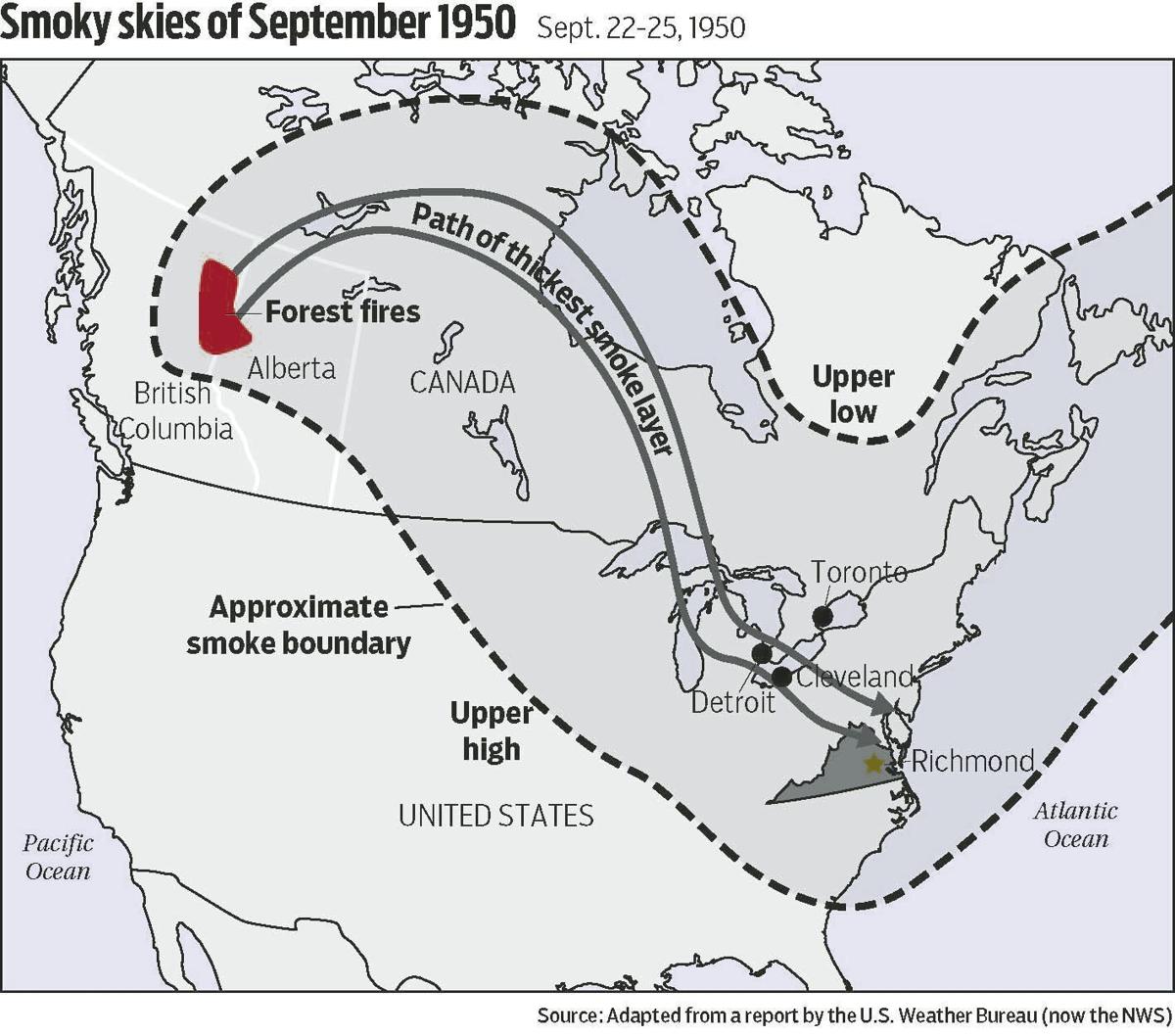 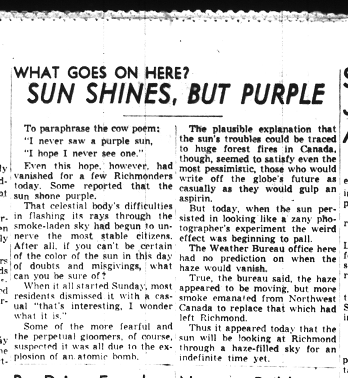 Seventy years ago, the sky from the Great Lakes to Virginia transformed without warning.

The strange pall invaded with no sound, no smell, no precipitation.

Just to our north, the light of that Sunday afternoon was snuffed entirely as if a solar eclipse came unannounced, similar to recent scenes from the West Coast.

Millions from Michigan to Ontario to New York flicked on car headlights, streetlamps and radios. Birds in Pennsylvania were tricked into roosting and livestock prematurely sought their barns.

Unbothered, afternoon ballgames carried on under stadium lights. Others were unnerved by fears of an atomic attack, a secret government test gone wrong or the end of the world itself.

But the phenomenon had nothing to do with Soviets or flying saucers.

Using the recently unlocked knowledge of upper air currents, meteorologists quickly traced the eerie disruption of the sun on the Eastern Seaboard to smoke from a vast wildfire in western Canada.

That sun-blotting smoke layer might have thrust Richmond into an unnatural night, too, had it moved a little faster or a little farther south before going out to sea. But a smoky veil still hovered over the Eastern Seaboard for the better part of the next week.

From the Richmond News Leader, Sept. 27, 1950: “That celestial body’s difficulties in flashing its rays through the smoke-laden sky had begun to unnerve the most stable citizens. After all, if you can’t be certain of the color of the sun in this day of doubts and misgivings, what can you be sure of?”

This fading chapter of weather history has been reconstructed based on dozens of archived reports from the U.S. Weather Bureau (now, National Weather Service), the Richmond Times-Dispatch and the Richmond News Leader.

Its anniversary comes at a relevant time.

During the middle of this month, smoke from the massive wildfires burning in the western U.S. sprawled coast-to-coast and tarnished the sunlight from Virginia to New England. But the hazy afternoons and discolored sunsets we witnessed on Sept. 15 and 16 were superficial effects compared with the days of dangerous air quality plaguing the West Coast fire zones.

In 1950, as now, an amplified weather pattern was at work across North America, bringing excess heat across parts of the west and more of a chill to the east. But the atmosphere in 2020 is altered by decades of greenhouse gas emissions, one critical factor now making the West Coast hotter, drier and increasingly prone to extreme fire behavior.

Throughout the summer of 1950, drought, winds and above-normal temperatures over western Canada set the stage for the largest reported fire in North American history. Canadian researchers now estimate the Chinchaga Fire consumed at least 4 million acres in remote sections of Alberta and British Columbia.

After a major flareup vaulted its smoke high in the troposphere on Sept. 22, the wind patterns carried the thickest plume eastward toward Hudson Bay, then abruptly southward over the Great Lakes.

It essentially funneled between a large upper low spinning counter-clockwise over Quebec and a ridge over the central U.S. It came on the heels of a cold snap that brought early frosts and freezes to Virginia.

What should have been a sunny week here thanks to high pressure was instead sapped of its brightness.

The pall blocked enough sunlight to limit Richmond’s highs to the 50s and 60s, much cooler than it otherwise would have been.

The thickness and altitude of the smoke layer varied both by location and by day, which likely accounts for the range of effects described by witnesses.

Even during the initial “blackout” of Sept. 24, it hovered 9,000 to 25,000 feet high, according to pilots flying through it. Harmful air and odors never reached the ground.

The strange light effects happened due to things taking place on the molecular level, high above. Light from the sun contains a mix of all colors, with blue having the shortest wavelengths and red the longest. Lots of tiny particles in the air, like soot, can selectively scatter some wavelengths more than others. In this case, green hues were effectively squelched.

The pall continued across Newfoundland and eventually reached Europe, where the sight of a blue-colored sun caused a stir in the United Kingdom and Denmark.

Richmond was again greeted by a purple sunrise on Sept. 29, but a changing weather pattern brought clouds, showers and a smoke-free southwesterly flow to Virginia by October.

In more recent decades, fires in the Great Dismal Swamp and Appalachian Mountains sent noticeable smoke across Virginia. Those plumes moved closer to the ground, so they came with a noticeable smell or decline in air quality.

A distant fire in Quebec even sent unhealthy air southward through the Mid-Atlantic and Virginia in the summer of 2002.

But the event of 1950 was quite unusual in its reach and magnitude.

Perhaps the biggest mystery of 1950 is how such a dramatic, widely witnessed weather anomaly over the Eastern Seaboard faded into relative obscurity.

States with the most extreme weather

States with the most extreme weather

Richmond Times-Dispatch staff photo of the sun turned pink-tinged and hazy by forest fires in Canada on Sept. 25, 1950 (originally in black and white, however).