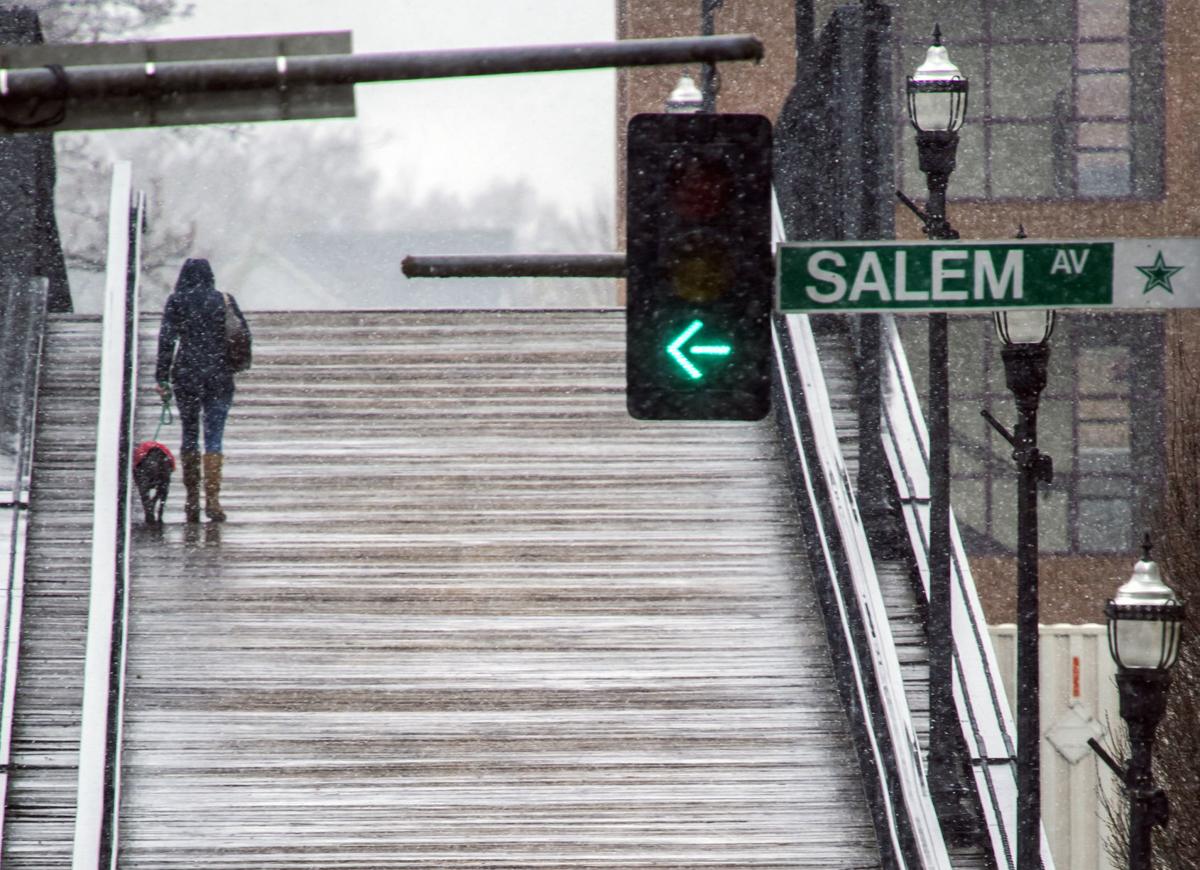 A dog walker heads up Martin Luther King Jr. Bridge in the wet and snowy weather on March 8 in Roanoke. If last week’s snowfall had happened during 1918-20, it would have been the biggest during that span. 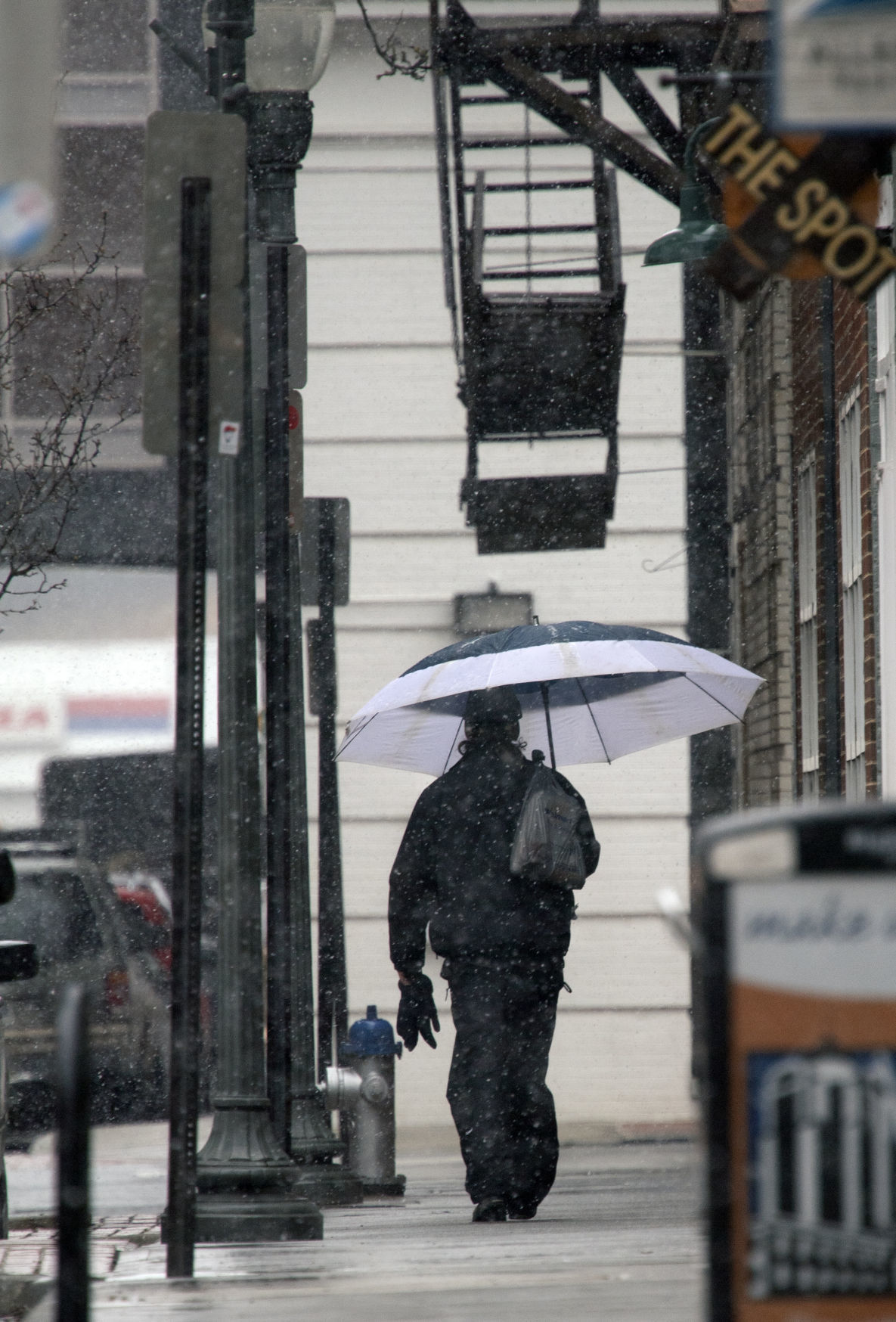 A century ago on this date, one of Roanoke’s most remarkable winters was winding down. There weren’t massive snow drifts piled up from repeated burying winter storms. Quite the opposite. On March 13, 1919, it had not snowed enough to measure even one time during the entire 1918-19 winter, nor would it in the following weeks as late winter folded into early spring.

Then it got even weirder. It didn’t snow enough to measure in the entire 1919-20 winter, either.

In fact, according to recorded weather data, Roanoke received no measurable snow between Feb. 3, 1918, and Jan. 10, 1921. That’s an amazing 1,072 days, or two years, 11 months and seven days without even one-tenth of an inch of snow accumulating at Roanoke.

If three months with a couple of ice-crusted small snows following a historic December snowstorm can frustrate some snow fans as much as this winter has, it’s hard to fathom what going almost three years without a white ground would do. But there are also lots of people around who would love it.

There has been nothing else remotely similar to this long-fused snow dearth on Roanoke’s weather record books dating back to their beginning in 1912. It would appear the second longest stretch without measurable snow was when Roanoke almost made it through calendar year 1997 without a snow covering — there were 386 days without measurable snow between Dec. 6, 1996, and Dec. 28, 1997.

It wasn’t that no snowflakes ever fell on Roanoke between February 1918 and January 1921. It’s just that they didn’t fall often, or very much, or, apparently, ever stuck enough to be measured.

From November 1918 to March 1919, there were five dates with a “trace” of snowfall, which signifies some flakes fell but didn’t accumulate, usually flurries or snow not sticking on an above-freezing surface. From November 1919 to March 1920, generally a colder period than 1918-19, there were 12 days with a trace of snowfall, but none of those days even had one-tenth of an inch.

A fair question to ask is whether data is complete and accurate for the time period in question.

After some research, I have come to believe quite strongly that 1918-19 winter was, indeed, an essentially snowless one for Roanoke, and that a second straight winter without measurable snow in 1919-20 is also, at the least, highly plausible.

One key factor is that the daily records for Roanoke do appear to be complete for this time period. There are some intermittent periods of missing data, especially for snowfall, in the first three decades or so of Roanoke’s official weather records, but the late 1910s and early 1920s are not one of those periods

A newspaper clip in The Roanoke Times archive files showing no snowfall at all for calendar year 1919 also seems to support the likelihood that the 1918-19 winter, at least, had no measurable snow.

Studies have concluded that a strong El Nino was occurring in the 1918-19 winter, possibly what would have been one of the strongest on record if data was measured as meticulously as it has been since 1950. El Nino refers to the irregularly recurring warming of sea surface temperatures in a stripe of the equatorial Pacific Ocean.

A strong El Nino is often linked to mild, wet winters in much of the eastern U.S. Locally, snowfall is usually of a feast-or-famine nature during a strong El Nino, either very little or well above normal, depending on how often cold air can combine with wet storms. The winter of 1918-19 was obviously on the famine side for snowfall.

The El Nino likely continued to a lesser level in 1919-20 winter, which was colder but appears to be a winter when the luck of the draw with the weather pattern kept accumulating snow away from Roanoke. Bluefield, West Virginia, tallied more than 30 inches, which may mean there were strong northwest flow effects producing upslope snow that Roanoke would have been shielded from by the mountains, and then there was that one snow event that missed just east in late January.

Roanoke-area snow lover tension on the internet would be extreme with a similar result today, no doubt stoked further by gloating snow haters.

What makes the 1918-1920 snow drought even more remarkable is how it was bracketed by periods of extreme winter in our region.

December 1917 into early January 1918 marks one of the most extreme winter periods on record not just here, but through much of the central and eastern U.S., all the way to the Gulf Coast. That winter still ranks as Roanoke’s sixth snowiest with 44.5 inches — slightly above the 43.1 inches of 2009-10 — and included the Star City’s all-time record coldest temperature of minus-12 on Dec. 30, 1917.

The snow drought ended dramatically on Jan. 10, 1921, when 20 inches of snow fell on Roanoke, still the record for most snowfall on a single calendar day. (The 15 inches that fell this past Dec. 9 ranks third in that category.)

Without even considering any possible future changes to climatic patterns, merely the fact that back-to-back winters without accumulating snow have happened once before means that something similar could happen again.

Looking past Friday showers, we may already be in a long, relatively dry period

Many of you have been asking for a lengthy dry period after so much rain for months. Other than some showers on Friday morning, we may already…

A dog walker heads up Martin Luther King Jr. Bridge in the wet and snowy weather on March 8 in Roanoke. If last week’s snowfall had happened during 1918-20, it would have been the biggest during that span.