A lone bison stands as a storm packing high winds and snow sweeps through the intermountain West Tuesday in Evergreen, Colo. Forecasters predict that the storm will continue through Wednesday before moving out on to the plains. 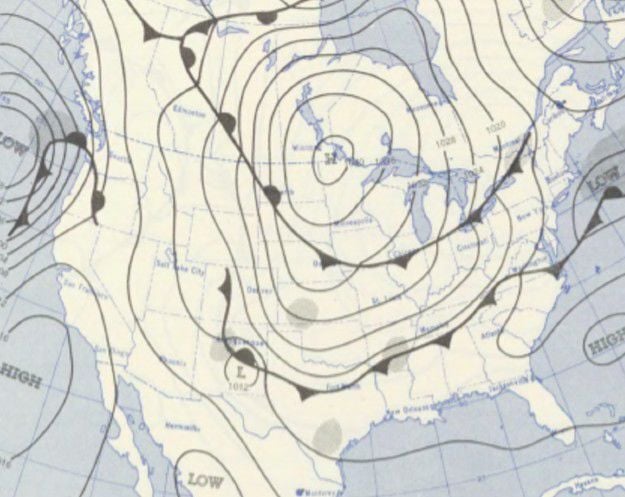 A weather map from October 7, 1954, shows high pressure centered near the U.S.-Canada border pushing two cold fronts southward, the second leading a mass of cold Arctic air. These fronts dropped temperatures from the 90s to below freezing in only two or three days in the Roanoke and New River valleys.

It was 101 degrees in Denver on Saturday, the hottest September temperature on record there. That was followed by 97 on Sunday and 93 on Monday.

Even for the High Plains region just east of the Rockies, known for dramatic temperature shifts, this was an extraordinary summer-to-winter flip.

It begs the question: Has anything like this happened in our own neck of the woods?

The short answer is no, and it’s highly unlikely it ever will. But there have been a few vaguely similar occurrences.

The primary factor reducing the chances of a similar scenario developing for the Roanoke area, and really all of Virginia, is the orientation of the Appalachians relative to the source of Arctic air.

Most Arctic air masses move into our region from the northwest. The Appalachians, aligned southwest to northeast perpendicular to the movement of these air masses, act as a speed bump. Cold air at the surface tends to pool on the western side of the Appalachians before flowing through and over them, and the compression warming effects of downslope flow on this side of the mountains slightly modify the Arctic cold, at least initially.

Our sharpest cold periods take a few days to settle in, usually involving a strong Arctic high moving overhead and/or cold air eventually oozing south or southwest east of the mountains where it is not as obstructed.

The last point is also a reason why the Plains states east of the Rockies are so susceptible to “blue norther” temperature plunges — the cold air moves south from Canada over the flatter land and is actually funneled southward by the position of the north-south aligned Rockies to the west.

A secondary factor is our relative closeness to warm ocean water, only a few hundred miles east and southeast of us, and slightly farther to the south and southwest. Compared to the landlocked Plains states, it’s too easy to get moist air masses trapped against the mountains with higher dew points to keep temperatures from falling too far too fast.

There have been a few historic cases in the late summer and fall locally resulting in quick summer-to-winter flips somewhat similar to what has just happened in Colorado and nearby states.

One was during the first week of September 1924. Roanoke’s temperature hit 97 and Blacksburg’s 90 on the first day of the month. It was 83 for a high at Roanoke on Sept. 5, but by the next day the low had fallen to 37. Blacksburg dipped to 34.

October 1954 may provide a better case. Roanoke’s Oct. 5 high temperature of 91 was followed by a low of 33 just two days later and 30 three days later. Blacksburg went 88 to 25 in the same time span.

Both cases were the result of a strong Arctic cold front, pushed by powerful high pressure over Canada, overpowering a hot high pressure system over the Southeast U.S.

Neither of those cases involved snow.

Perhaps the closest similar event to Denver’s current 90s-to-snow overnight episode happened 17 years ago in late March 2003. Roanoke’s March 29 high was 76, but on the next morning, 7 inches of snow fell. Blacksburg went from 68 to 8 inches of snow.

While a strong Arctic cold front was in play, the dynamics for our quick warmth-to-snow events are usually centered on a deepening surface low near the coast and intense upper-level low inland, dropping the freezing levels rapidly. These kind of episodes are more likely to happen here in late winter or spring than in the fall.

The current situation in the High Plains and southern Rockies also involves a strong upper-level low, actually becoming cut off from the jet stream, like the ones that brought us unseasonable chill and days of rain in May and June.

Another reason big temperature shifts are more likely in that region than here is higher elevations — flatter, lower areas are commonly 3,000 to 5,000 feet above sea level, similar to our highest ridgetops, meaning the lowering cold levels don’t have to drop as far down to get snow to the surface.

Temperatures will rebound pretty quickly for the Plains and the lower elevations of the southern Rockies by the weekend. Denver will probably see 70s again, maybe 80s, though probably not 90s.

We’ve seen some impressive spring warmups in fairly recent years. Roanoke warmed up from 13 degrees on the morning of March 3, 2009, to 83 degrees on the afternoon of March 7, rapidly melting a few inches of snow cover. April 2013 brought Roanoke’s only recorded instance of seeing accumulating snow (1 inch on April 4) and 90 degrees (April 10) within a week.

It’s not that we don’t have changeable weather here sometimes. But maybe we should hold off on posting those “Only in Virginia” memes about how this is somewhere special or unique in regard to rapidly flipping temperature. The western High Plains simply have us beat.

Looking ahead: What La Nina might mean for the Roanoke area's winter

How low can it go? Roanoke/NRV to experience unusually early fall chill

Wildfires to the left of us, hurricanes to the right, and we’re stuck here in the middle with … fall.

The defining fall atmospheric battle of the tropics vs. tundra will be in full swing this week for Southwest Virginia, with alternating effect…

Tropical showers make a comeback for Roanoke/NRV, most of Virginia

There are basically three kinds of weather common in our Septembers:  (1) Extended summer heat, (2) early taste of fall, and (3) tropical stic…

None of that Fujiwhara-effect, dancing-around-each-other stuff or historical milestones about having two hurricanes/named tropical storms in t…

Watch Now: Could 2020 be the hottest year on record globally?

Watch Now: Could 2020 be the hottest year on record globally?

A lone bison stands as a storm packing high winds and snow sweeps through the intermountain West Tuesday in Evergreen, Colo. Forecasters predict that the storm will continue through Wednesday before moving out on to the plains.

A weather map from October 7, 1954, shows high pressure centered near the U.S.-Canada border pushing two cold fronts southward, the second leading a mass of cold Arctic air. These fronts dropped temperatures from the 90s to below freezing in only two or three days in the Roanoke and New River valleys.