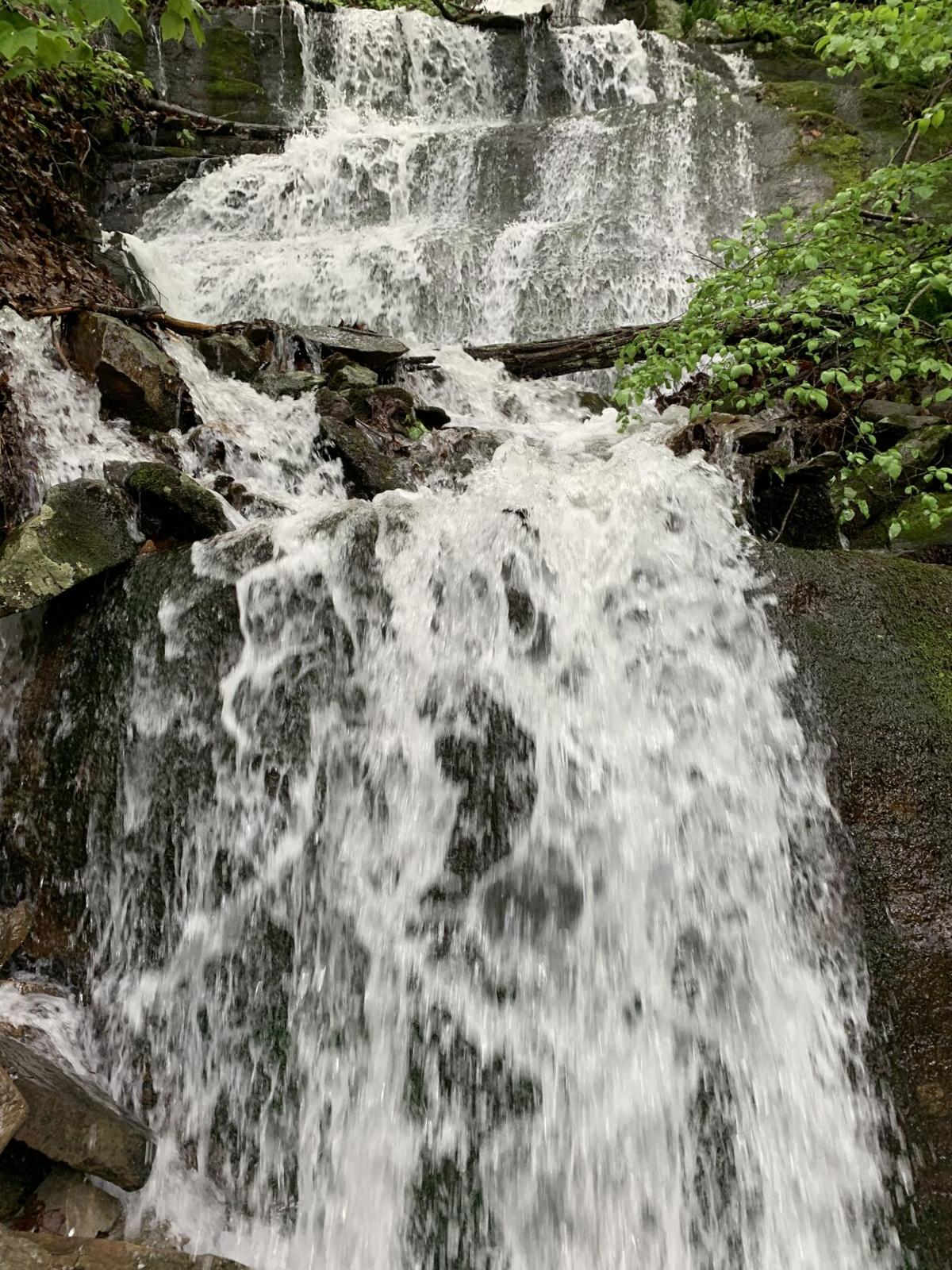 Tiny drainages that are usually almost dry, such as this one at Poor Mountain Natural Area Preserve in southwest Roanoke County, were turned into raging waterfalls by five days of rain totaling over 9 inches last May. 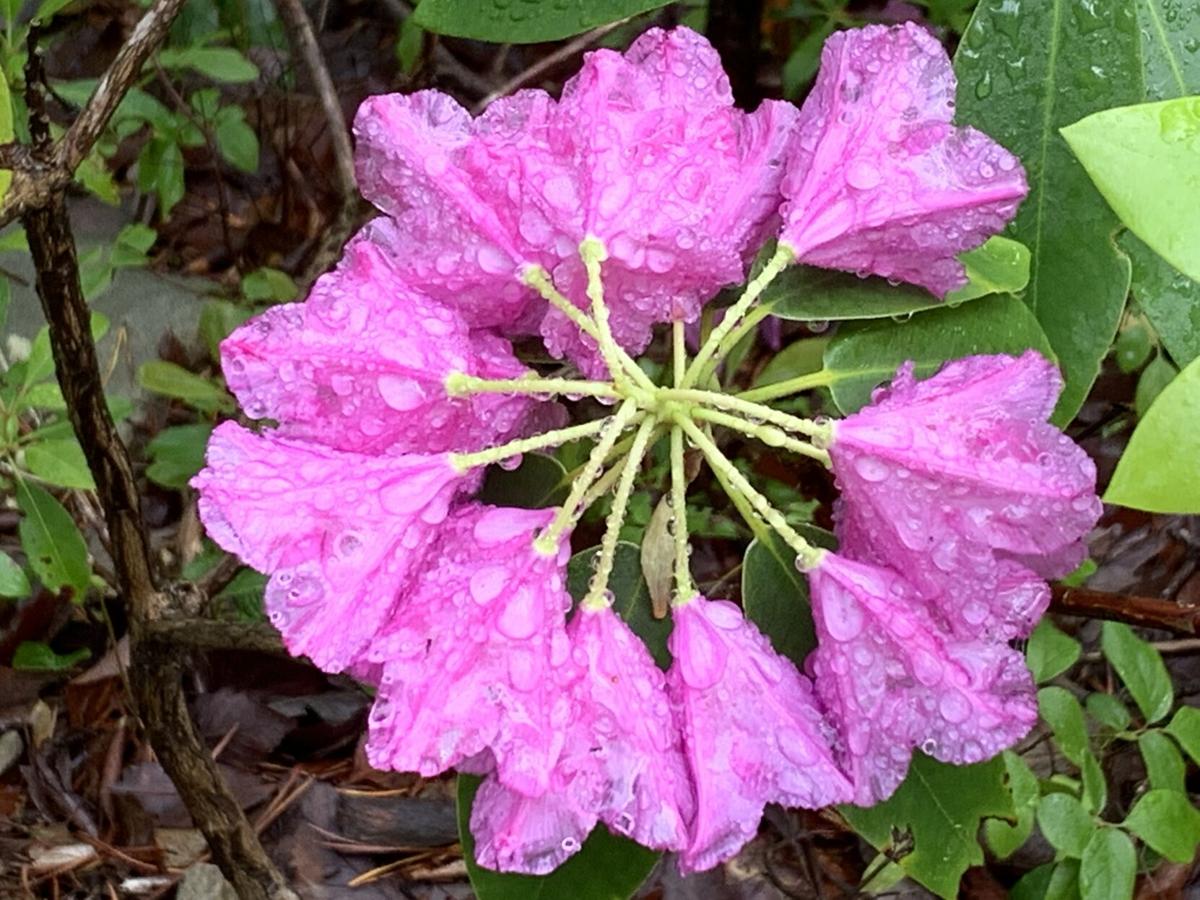 Rhododendron blooms were weighed down by five days of almost constant rain on May 22, 2020.

April gets credit for its showers, but it has been May with recent rainfall power.

In two of the last three years, May has been the month that has turned the spigot on full blast toward record annual rainfall in the Roanoke area.

In 2018, 9½ inches of rain in May started rolling that year toward the first 60-plus inch rainfall total in Roanoke weather history, dating to 1912, with 62.45 inches.

As of now, there is no sign that this May will follow suit with those recent soggy ones, as the overall pattern favors southeast U.S. high pressure and a jet stream trough dipping more into the central U.S. rather than the East.

Though this week is showery with a few storms, and the late week will bring a few cool days, that pattern would suggest a tilt to warmer than normal temperatures during the first half of May, with occasional periods of showers and storms as cold fronts push through from time to time.

It does not, however, suggest stalling features like those that brought us days of torrents in two of the past three Mays — but, of course, we never know when changes that could lead to a wetter pattern may lurk around the corner.

Other than piling up the puddles, the soggy Mays of 2018 and 2020 had little in common with each other.

The first brought muggy downpours, the second a chilly drip.

In 2018, it was consecutive tropical lows in the Gulf of Mexico, sweeping deep moisture northward, that brought rounds of torrential rain that caused flash flooding and mudslides.

It should be noted that while the official gauge at the Roanoke-Blacksburg Regional Airport tallied 9½ inches of rain, there were localized cloudbursts during the latter half of May in 2018 that were even greater than that.

The Cave Spring area of Roanoke County, for instance, got about as much rain on the afternoon of May 27 as the airport gauge did for the whole month.

In 2020, it was primarily a “cut-off” upper-level low that cycled continuous light to moderate rain off the Atlantic Ocean into the region on May 18-22.

Dubbed here as the “raindemic” at the time, it never rained all that hard but it was persistent from late Monday through early Friday that week, totaling 9¼ inches of rain over five days despite rarely raining even as much as a quarter-inch in any specific hour.

The May 19-21 period in the middle was the first time on record that Roanoke had more than 2 inches of rain on three consecutive days. It took a couple of days to get there, but some flooding did happen, more a slow-motion inundation than flash flooding.

Last May and June had an outbreak of these, happening three times, each providing wet weather to our region.

The first cut-off low was the soggiest, with a constant fetch of moisture off the Atlantic Ocean lifted against our higher terrain, though 7 inches from squally rain with a cut-off low June 14-18 proved a worthy sequel.

The cut-off low traps colder air aloft that sinks to the surface. Temperatures hung out in the 40s and 50s most of the time during last May’s “raindemic.” That contrasted sharply with highs commonly in the 80s and lows in the 60s — even lower 70s a couple mornings — during the sticky tropical downpours of May two years before.

Rainfall for 2021 so far is running only about an inch above normal locally, following a relatively dry April that partially offset the persistent cold rain and wintry mix of winter.

History shows there is plenty of time to swing toward either drought or deluge in the rest of 2021. If it’s like 2018 and 2020, the next few weeks will determine its course.

Water raced over roads in Cedar City, Utah, as heavy rains fell on the area triggering flash flooding on July 25.

Tiny drainages that are usually almost dry, such as this one at Poor Mountain Natural Area Preserve in southwest Roanoke County, were turned into raging waterfalls by five days of rain totaling over 9 inches last May.

Rhododendron blooms were weighed down by five days of almost constant rain on May 22, 2020.