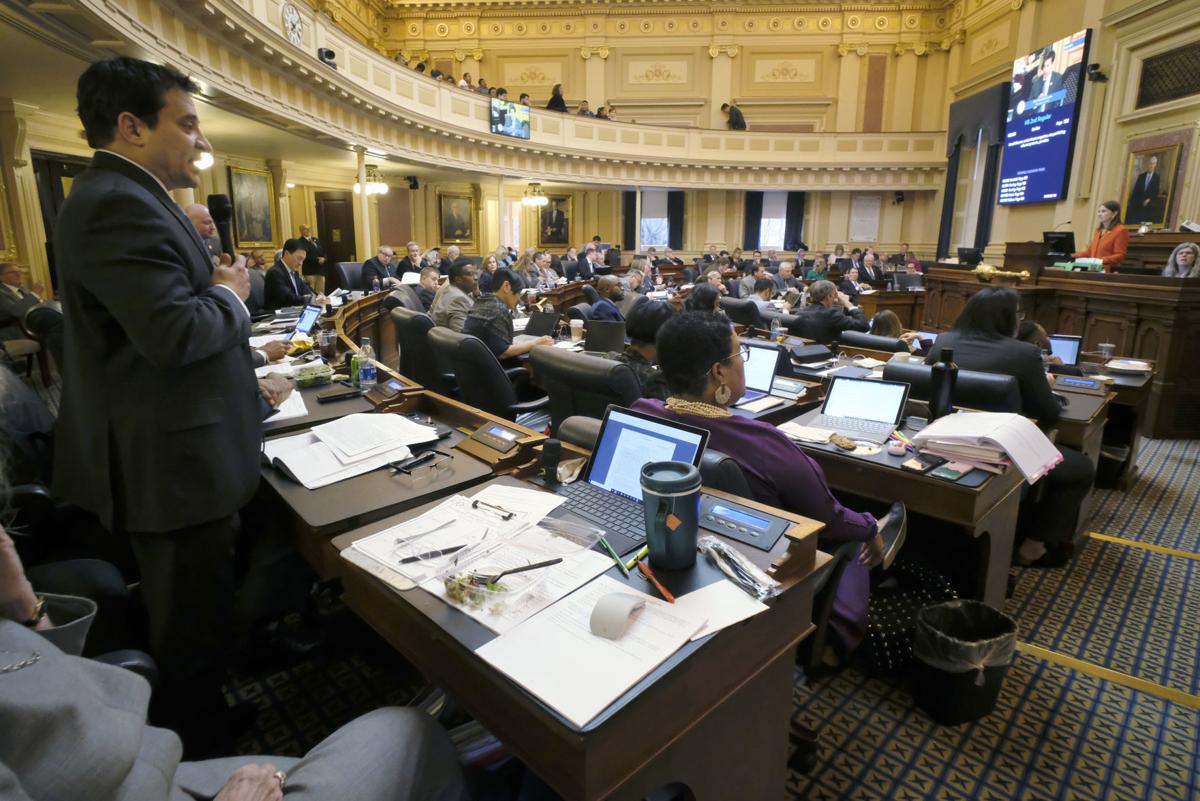 Del.Sally Hudson, D-Charlottesville, talks with a colleague during the floor session of the House of Delegates inside the State Capitol in Richmond, VA Tuesday, Feb. 25, 2020.

Virginia will not join an effort this year to decide the presidential election by the popular vote instead of the Electoral College system.

The Senate Privileges and Elections Committee voted 14-1 on Tuesday to carry over to the 2021 General Assembly session House Bill 177 from Del. Mark Levine, D-Alexandria. The Senate version of the bill was withdrawn last month.

“A lot of Americans’ voices aren’t getting heard,” Levine said. “We can make every vote count.”

The bill would have entered Virginia into the National Popular Vote Interstate Compact, in which a president would be elected based on the popular vote and not on the current system in which each state receives a number of electors equivalent to its congressional representation (Virginia has 13) and the candidate that receives 270 or more wins the election.

Members of the coalition agree to award their electoral votes to the presidential ticket that receives the most popular votes in all 50 states and Washington, D.C. The capital city and 15 states now make up the compact, which has 196 of the 270 electoral votes it would need to take effect.

During public comment on the bill, which passed the House of Delegates in a 51-46 vote earlier this month, lawmakers heard competing testimony on the merits of the idea.

“It’s best for the country as a whole,” said Ray Haynes, a former California state senator who serves as a consultant to the National Popular Vote initiative.

Said Sean Parnell, the senior legislative director for Save Our States, which defends the Electoral College: “Our electors are supposed to represent the interest of Virginians.”

Sen. Janet Howell, D-Fairfax, was the lone vote against the decision to punt on the bill. Howell made a separate motion to send the bill to the full Senate.

“We’ve got a real problem in this country,” said Sen. Scott Surovell, D-Fairfax.

Virginia would have pushed the compact to 209 electoral votes, still 61 shy of what it needs. The initiative has until July 20 to get the support it needs to be in place for the 2020 presidential election, Levine said.

Also Tuesday, the Senate Finance and Appropriations Committee backed a bill to allow local governments the option of ranked-choice voting in municipal elections.

House Bill 1103 from Del. Sally Hudson, D-Charlottesville, cleared the House earlier this month with some bipartisan support, and heads to the full Senate. The chamber’s money committee voted 12-3 on Tuesday to report the bill.

“It’s a benefit to communities like mine in Charlottesville that tend to have very low-turnout primaries in the summer and then local elections in the fall that often have multiple candidates running for a handful of open seats,” Hudson told the Senate Privileges and Elections Committee last week. “You end up with really split elections and less certainty about which candidate has majority support from the community.”

In ranked-choice voting, voters rank candidates from their most favorite to least favorite. A candidate who gets a majority of support of the first-choice votes wins the election. But if no candidate wins a majority in that first round of voting, the lowest vote-getter is eliminated. That candidate’s supporters have their votes transferred to the person they selected as their second choice.

The process continues until a candidate wins a majority.

Some members of the appropriations committee questioned the financial impact of the change. The Department of Elections said in the bill’s impact statement that it would need to make modifications to the state elections system, which would require hiring five contractors at a total cost of $1.3 million to make the changes.

Hudson said the costs would be borne by the localities that choose to move forward with the idea, which would take effect July 1, 2021.

Candidates for 3 seats on Roanoke City Council answer questions on issues ahead of Nov. 3 election

Three Democrats, two Republicans, two independents and a Libertarian square off for three open seats on Roanoke’s city council. The election i…

Aaron Grigsy and Charlie Wade, a baker and a miller, are contributing to the local food movement by keeping the wheels turning at the historic Woodson's Mill in Nelson County.

Del.Sally Hudson, D-Charlottesville, talks with a colleague during the floor session of the House of Delegates inside the State Capitol in Richmond, VA Tuesday, Feb. 25, 2020.